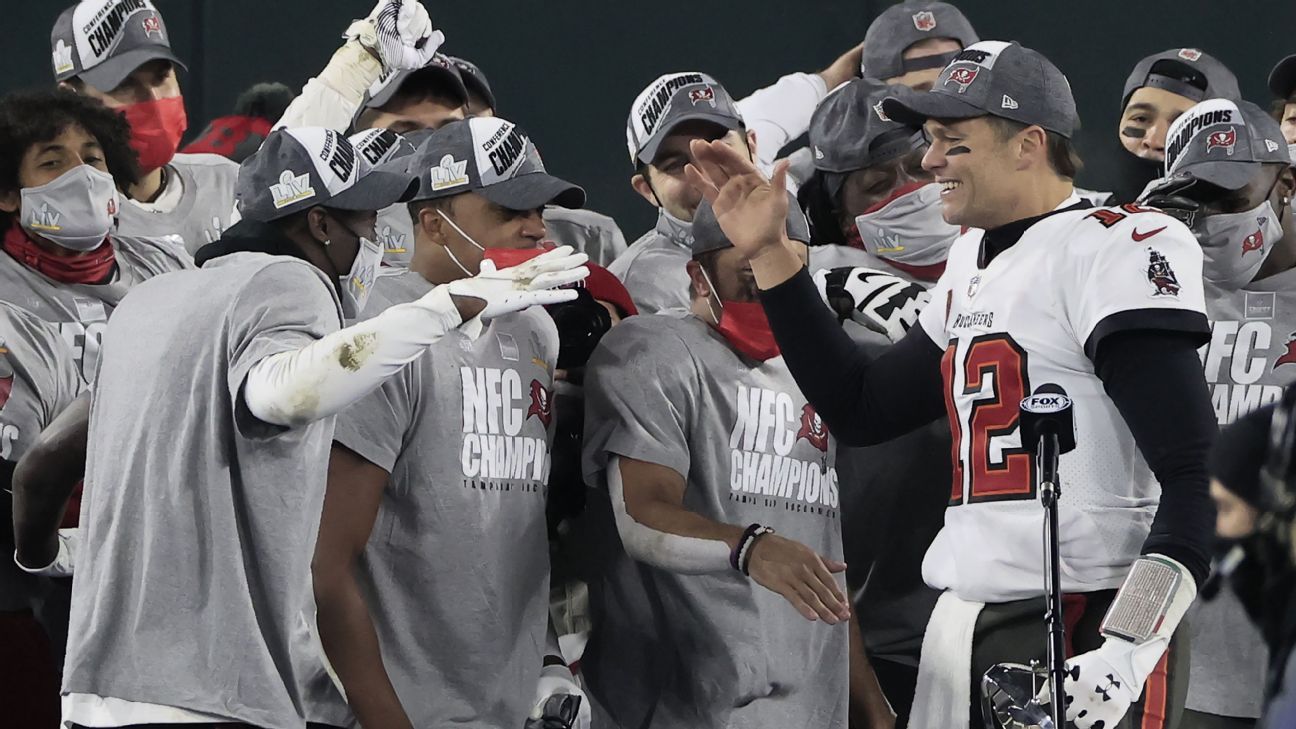 It would be hard to argue against the sports calendar year Los Angeles had, but Tampa, Florida, is making a case.

The Lakers and Dodgers won championships in the fall, but Tampa now has the Super Bowl with the hometown Buccaneers representing the NFC. This comes after the Lightning won the Stanley Cup and the Rays won the American League before losing to the Dodgers in the World Series.

The Bucs are the first team to play a Super Bowl in their home stadium and return to the Super Bowl after a 12-year drought, the second-longest drought in NFL history.

This is also an excellent civic development for Tampa mayor Jane Castor. She took office in May, 2019, and has seen all her city’s teams make championship runs.

BUCS WIN!!! @Buccaneers will be the first team to play at home in the Super Bowl! #GoBucs #TampaBayLV https://t.co/OhpCBUWFOB

Castor might be the mayor, but Tampa’s biggest fan is undoubtedly ESPN college basketball analyst Dick Vitale. He tweeted about his anxiety early in the game:

Every time Rodgers & @packers get the ball I need some Pepto Bismol ! pic.twitter.com/5wnfAkCgcO

But Dickie V was overjoyed when the Bucs won:

A great year to be a Tampa fan / what a yr @TBLightning @RaysBaseball @Buccaneers pic.twitter.com/pbqpe0UQ2F

Vitale was joined by the Rays and Lightning.

Congrats @Buccaneers ! What a year for Tampa sports. @TomBrady is the GOAT for a reason. A Super Bowl championship in Tampa would be a great birthday present for me this year 🥳

LETS GOOOO @Buccaneers !!!! What an incredible moment! Have a year Tampa!!!! Gotta finish it the right way!

Buccaneers QB Tom Brady is playing in his fourth Super Bowl in five seasons. In Brady’s historic career, he joins Kurt Warner, Craig Morton and Peyton Manning as the only QBs to represent two teams in the Super Bowl. Brady and Morton are the only QBs to play for both an AFC and NFC team. Brady’s latest Super Bowl trip brought out more celebrations, including cheers from former New England Patriots teammates.

Could not be more proud @tombrady said he would do it and he did. Congratulations @Buccaneers pic.twitter.com/8UXpu8ZxH9

Chiefs and Mecole Hardman strike back to take lead 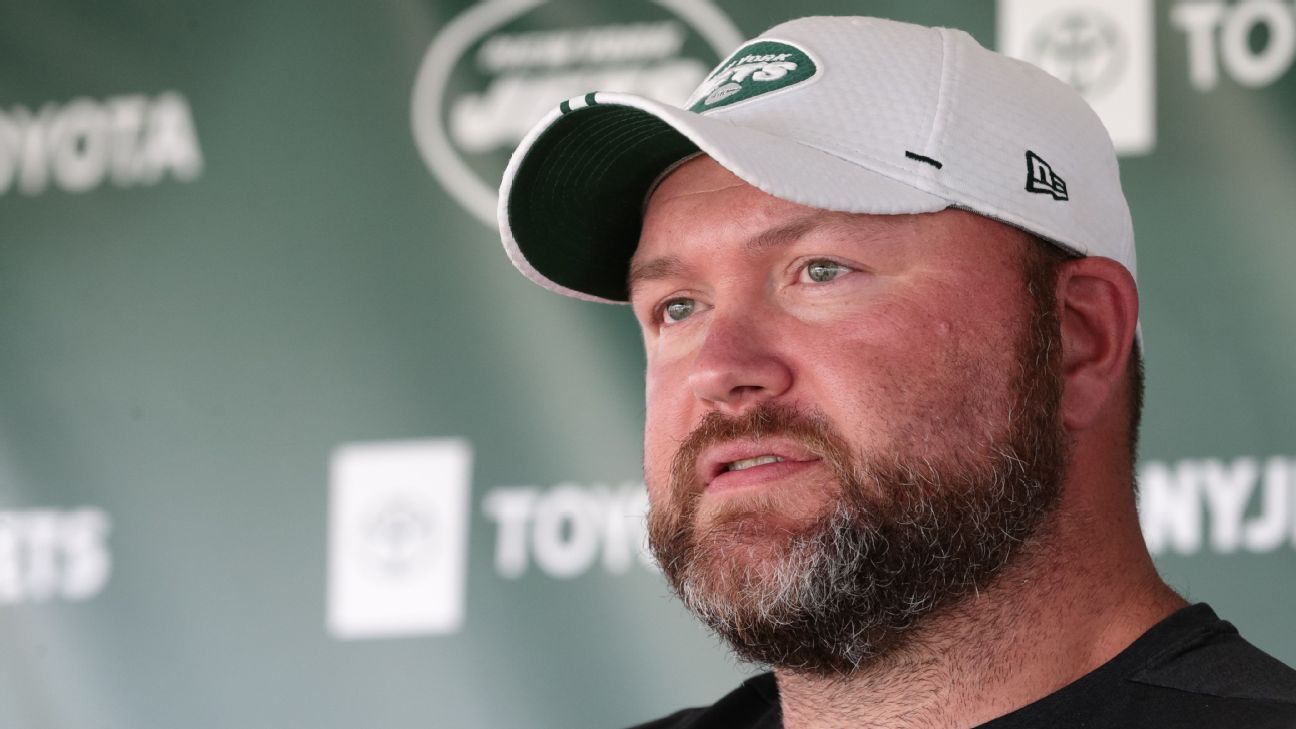 FLORHAM PARK, N.J. — The New York Jets, who once considered quarterback Sam Darnold an untouchable asset, are open to listening to trade offers.

“I will answer the call if it’s made,” general manager Joe Douglas said Wednesday in a video conference with reporters, confirming previous reports that the Jets are willing to field inquiries.

The Jets are facing a major quarterback decision: Stay with Darnold, draft a replacement with the second overall pick or perhaps pursue Houston Texans star Deshaun Watson if he becomes available — a potential scenario that Douglas downplayed.

Douglas said he’s in no rush to make a quarterback decision, but there’s a pressing deadline with regard to safety Marcus Maye, a pending free agent whose agent lashed out at the Jets on Tuesday night on social media. The GM dismissed the criticism, saying the goal is to sign Maye to a long-term contract. Failing that, they could use the franchise tag by next Tuesday’s deadline.

The quarterback drama remains the headline, especially in light of Darnold’s struggles.

At the 2019 trading deadline, Douglas said he’d listen to offers on every player except a franchise quarterback – and he put Darnold in that category. Clearly, that position has changed. Since the end of the season, the organization has remained non-committal on Darnold.

“As it pertains to Sam, we think Sam is a dynamic player in this league with unbelievable talent,” Douglas said. “He really has a chance to hit his outstanding potential moving forward. (But) if calls are made, I will answer them.”

The Jets have received multiple calls from interested teams, ESPN’s Adam Schefter reported previously. Their plan is to evaluate the top quarterbacks in the draft before making a decision on Darnold. The top candidate with the No. 2 pick is thought to be BYU’s Zach Wilson. Douglas said they’re gathering “as much information — good information — as we possibly can” on the available quarterbacks. Another option is sticking with Darnold and trading the second pick for a haul of draft picks.

The wild card is Watson. With two first-round picks in the upcoming draft, and two more in 2022, the Jets have the ammunition to pull off a trade of that caliber.

By rule, Douglas is prohibited from commenting directly on Watson, but he didn’t seem enthused about the prospect of trading significant draft capital for one player. That, of course, could be posturing.

“Obviously, we have a lot of different scenarios and a lot of different rabbit holes we can go down,” he said, responding to a general question about a potential blockbuster deal. “Not to get so much into a hypothetical question, but I just go back to (our philosophy).

“For us to get to where the great teams are, the most consistent teams are, you do that through the draft. It’s the most team-friendly market in sports. For us to be a team that’s consistently competing for Super Bowls, we have to hit on our draft picks.”

The Jets have a history of trading away top draft picks. They traded unhappy safety Jamal Adams last summer, and now Maye — his former sidekick — appears to be disenchanted with negotiations. Agent Erik Burkhardt tweeted the Jets “refuse to take care of their best player, captain and team-voted MVP.”

…Yet refuse to take care of their best player, Captain, & team-voted MVP in his prime who had several All-Pro votes…and who played out his entire rookie deal and even changed positions on his contract year (after they got rid of last yrs All-Pro safety). ✌🏼

Douglas brushed it off, indicating it’s part of the business and negotiations. He said they’ve had “productive conversations” with Maye’s agents, adding, “Our plan hasn’t changed. We’re in the process of working to have Marcus be here long term.” 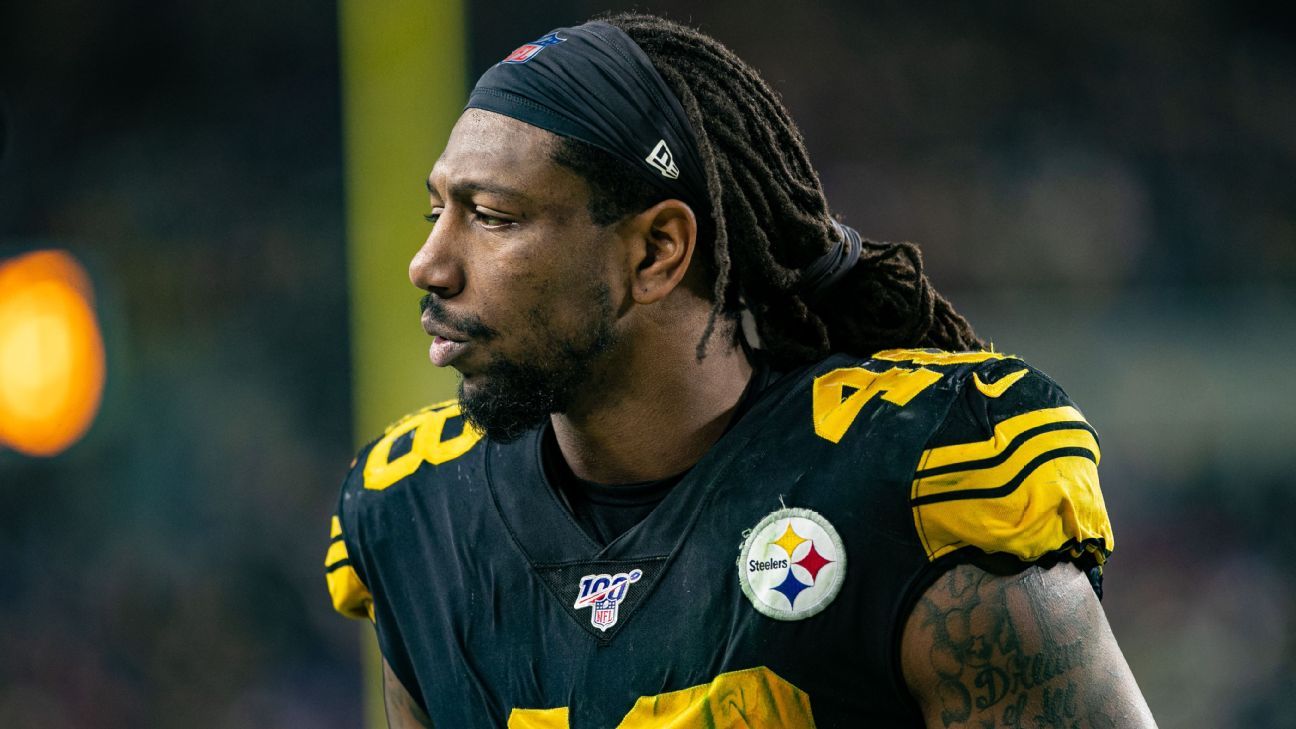 One of the top pass-rushers in free agency is getting healthier.

Pittsburgh Steelers outside linebacker Bud Dupree, who tore his ACL on Dec. 2 against the Baltimore Ravens, told ESPN he plans to be a full participant in an NFL training camp based on positive feedback from his doctors.

Dupree has been rehabbing diligently since the injury, and the Steelers have been pleased with his progress. Nearly two weeks ahead of when free agency begins on March 17, Dupree has kept in communication with the Steelers, who would like to bring Dupree back but have a $15.5 million salary-cap deficit. The expectation is they will at least stay involved with Dupree as free agency approaches, even if they can’t meet his market.

Dupree’s potential new team can determine how much they may want to limit him in camp, but his plan is to be fully available.

Dupree had 8 sacks, 31 combined tackles, 8 tackles for loss and 15 quarterback hits last season before his injury.

He hit his stride with 11.5 sacks during the 2019 season, which marked his healthiest season since being taken by the Steelers out of Kentucky in the first round of the 2015 draft. 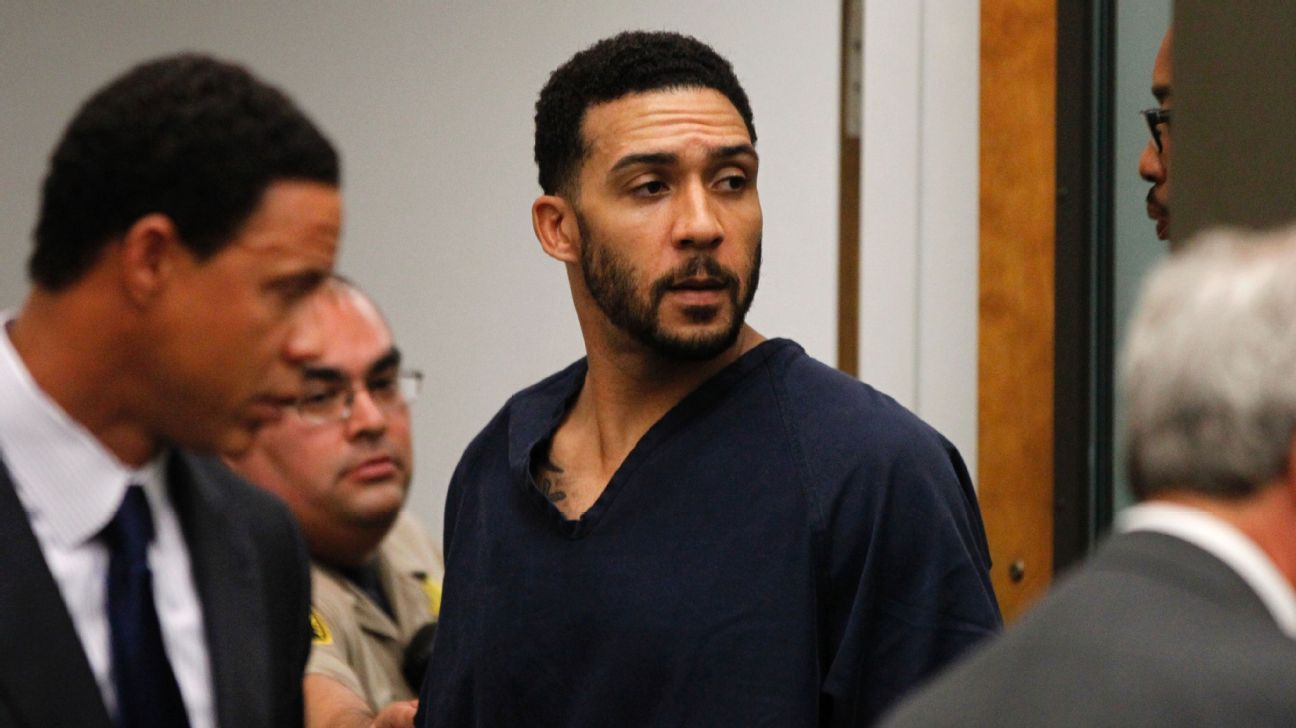 SAN DIEGO — Former NFL player Kellen Winslow II was sentenced Wednesday to 14 years in prison for multiple rapes and other sexual offenses against five women in Southern California, including one who was homeless when he attacked her in 2018.

The 37-year-old son of Chargers Hall of Fame receiver Kellen Winslow appeared via videoconference at the hearing in San Diego Superior Court in Vista, California.

Winslow II declined to comment before his sentence, saying his lawyers had advised him not to speak.

San Diego County Superior Court Judge Blaine Bowman said Winslow can only be described with “two words, and that is sexual predator.” Bowman said Winslow selected women who were vulnerable because of their age or their living situation with the idea that “hopefully he would get away with it in his mind.”

Winslow was once the highest-paid tight end in the NFL, earning more than $40 million over his 10 seasons before he left in 2013.

He was convicted of forcible rape, rape of an unconscious person, assault with intent to commit rape, indecent exposure, and lewd conduct in public. The forcible rape involved a woman who was homeless in his home town of Encinitas, a beach community north of San Diego.

The 14-year-sentence was the maximum allowed under a plea deal.

His attorney Marc Carlos said Winslow suffered from head trauma from the many blows to his head playing football, which can only explain why he “went off the rails” going from a star athlete to a convicted sexual predator.

Carlos said his client has accepted responsibility and intends to get help.

Jurors also convicted him of two misdemeanors — indecent exposure and a lewd act in public — involving two other women.

But that jury failed to agree on other charges, including the alleged 2018 rape of a 54-year-old hitchhiker, and the 2003 rape of an unconscious 17-year-old high school senior who went to a party with him when he was 19.

Before he was retried on those charges, he pleaded guilty to raping the teen and sexual battery of the hitchhiker.

The father of two, whose wife filed for divorce after he was convicted, had faced up to 18 years in prison for all the charges. Both sides agreed to reduce the sexual battery charge to assault with intent to commit rape last month. That reduced the maximum sentence to 14 years.

Winslow was drafted by the Cleveland Browns in 2004 and spent four seasons with the team, being named to the Pro Bowl in 2007. He also played for the Tampa Bay Buccaneers, New England Patriots and New York Jets. His last NFL season was in 2013.