EAST RUTHERFORD, N.J. — A scary moment unfolded on Sunday at MetLife Stadium when New York Giants wide receiver C.J. Board needed to be immobilized and carted off the field after taking a hit against the Washington Football Team.

Board attempted to make a catch early in the third quarter when he was hit by Deshazor Everett. Board awkwardly fell to the ground and did not appear to move as medical personnel were called onto the field.

The fourth-year wide receiver was later ruled out with a neck injury.

Board remained on the ground without movement for several minutes. He had his face mask cut off and his back stabilized before being placed on the cart and leaving the field.

Players cleared the middle of the field as medical personnel attended to the injured Giant. Some could be seen praying.

Board was claimed off waivers by the Giants from the Jacksonville Jaguars this past summer. He has also spent time with the Baltimore Ravens, Tennessee Titans and Cleveland Browns.

Board has seven catches for 64 yards this season. 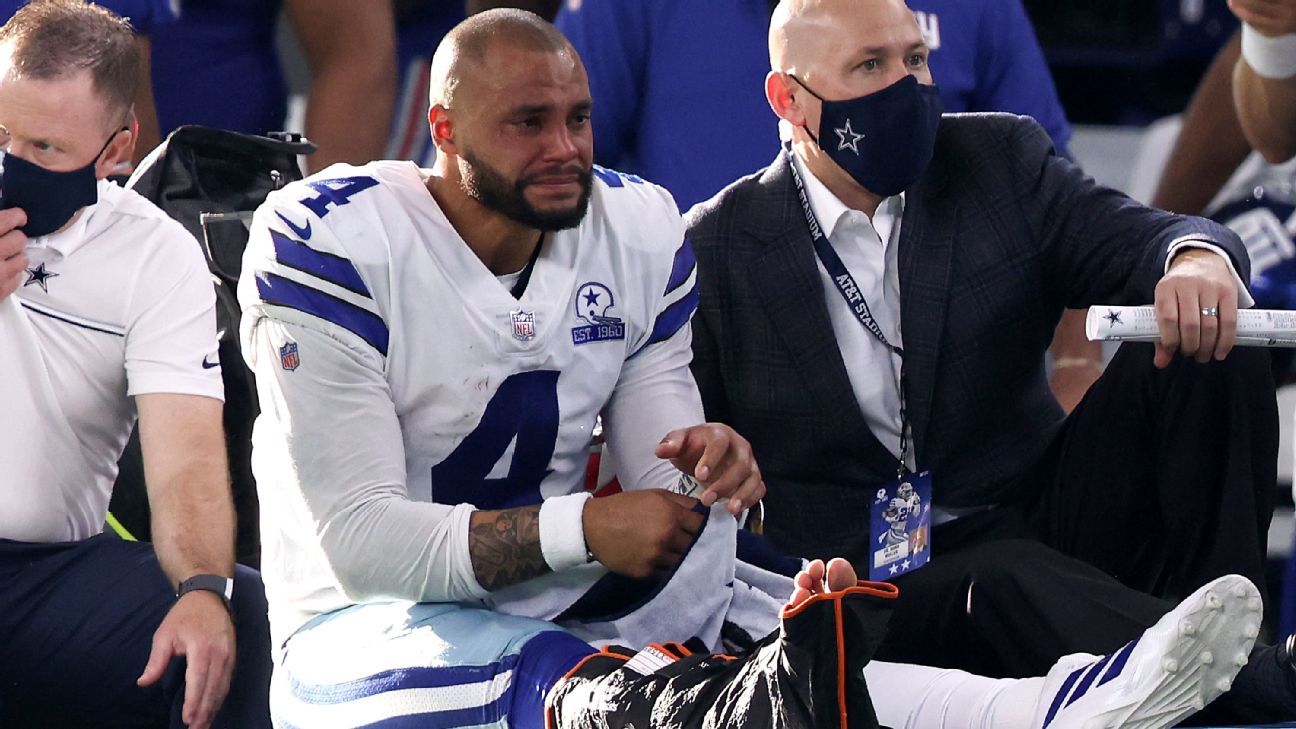 Doctors are pleased that Dallas Cowboys quarterback Dak Prescott has had no infections from the surgery on the compound fracture in his right leg, a source told ESPN.

“So far, so good,” the source told ESPN about Prescott’s recovery.

Doctors were concerned that an infection could set in and were closely monitoring the situation to guard against it. Prescott was sent home from the hospital Monday afternoon after undergoing surgery Sunday night.

Sources expect Prescott to need four to six months of rehab, but Cowboys coach Mike McCarthy said the quarterback is “going to challenge any timeline.” In a video posted Thursday to Instagram, Prescott said he is “ready to start this road to come back” and is in “great spirits” after the season-ending surgery.

Prescott suffered the injury on a tackle in the third quarter of last Sunday’s victory over the New York Giants. He was in tears as he was carted off the field with his right leg in an air cast.

Prescott was at the Cowboys’ practice facility Thursday and met with teammates and coaches, and McCarthy noted “the electricity that he brings to our football team.”

Players from around the NFL have reached out to Prescott with messages of support over the past week, including other quarterbacks in the NFC East, such as Carson Wentz, Daniel Jones, Dwayne Haskins and Alex Smith, whose inspiring comeback from a similarly gruesome leg injury was complicated by post-surgical infections. 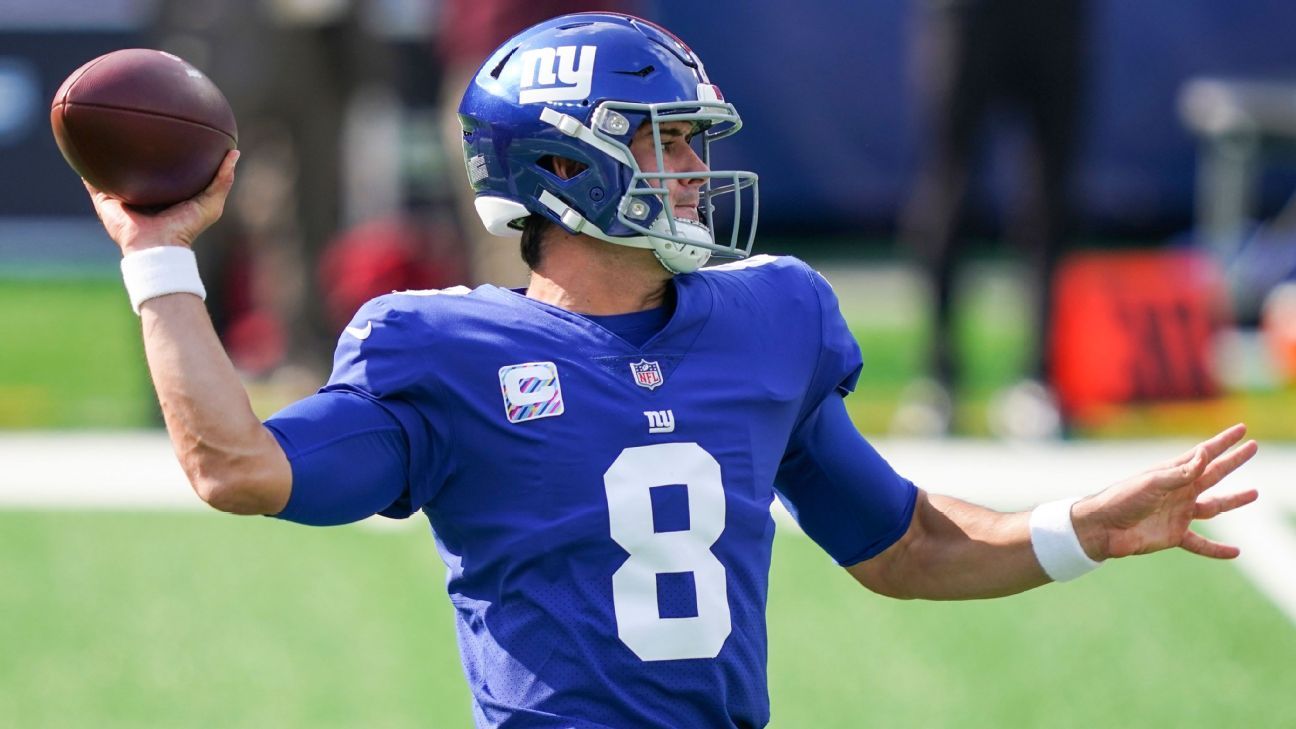 EAST RUTHERFORD, N.J. – The biggest play of the season for the New York Giants came from Daniel Jones.

Only it was from his legs, not his arm. Jones pulled a read-option in the second quarter on Sunday against the Washington Football Team for a 49-yard run.

It was his second run this season on that play for at least 20 yards, and the longest run of his young career.

Jones faked the handoff up the middle on the first-and-10 play with 11:50 remaining in the first half to running back Devonta Freeman and kept the ball.

Even fooled the camera man 🤯

It looked as if Jones had a chance to outrun the defenders, but he was tracked down at Washington’s 29-yard line by Jimmy Moreland. The Giants would eventually settle for a field goal.

Jon Brown makes first kick — at any level — for the Jaguars 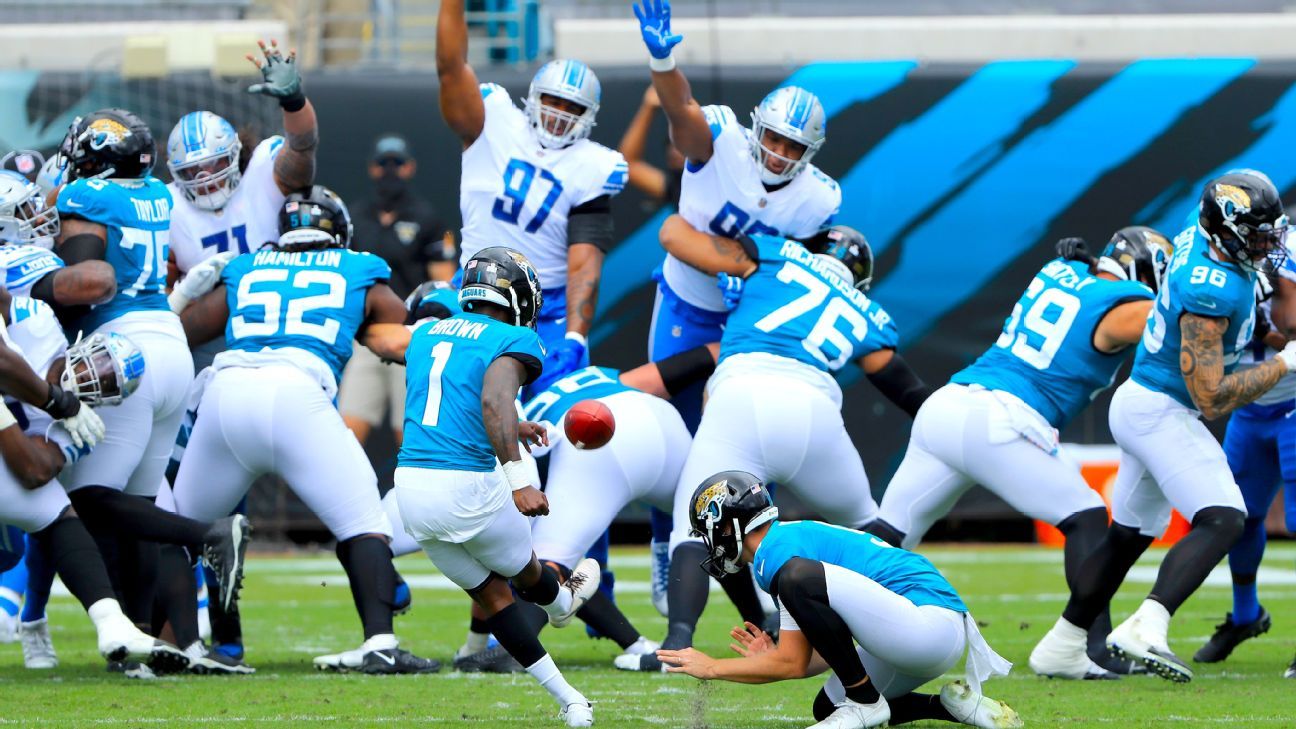 This was also Brown’s first kick in a game at any level. Brown played soccer in high school and earned a scholarship in that sport at Kentucky. He walked on as a football player at Louisville. He was a kickoff specialist and never attempted a PAT or field goal for the Cardinals. He has spent time with Cincinnati and San Francisco after going undrafted in 2016 but never had an attempt in a game.

Brown had another field goal attempt in the second quarter but pushed a 32-yard attempt right and it hit the top of the upright and bounced off.

The Jaguars are on their fifth kicker because of injuries. Josh Lambo, who has made 74 of 78 field goal attempts (including 11 of 12 from 50 yards or longer) since joining the team during the 2017 season, suffered a hip injury in Week 2 and has been on injured reserve ever since. The team elevated Brandon Wright from the practice squad, and he made 1 of 2 PATs against Miami in Week 3 but injured his groin during the game. The Jaguars signed Stephen Hauschka and Aldrick Rosas the next week, but Hauschka was unable to play because of knee soreness so Rosas kicked against Cincinnati in Week 4. He made 4 of 5 field goal attempts and his only PAT attempt. Rosas, however, injured his hip and groin during the game and was placed on the practice squad injured list. Hauschka played in last week’s loss at Houston and missed a 24-yard attempt wide left and came up short on a 49-yard attempt. He was released last Monday and the team elevated Brown from the practice squad.