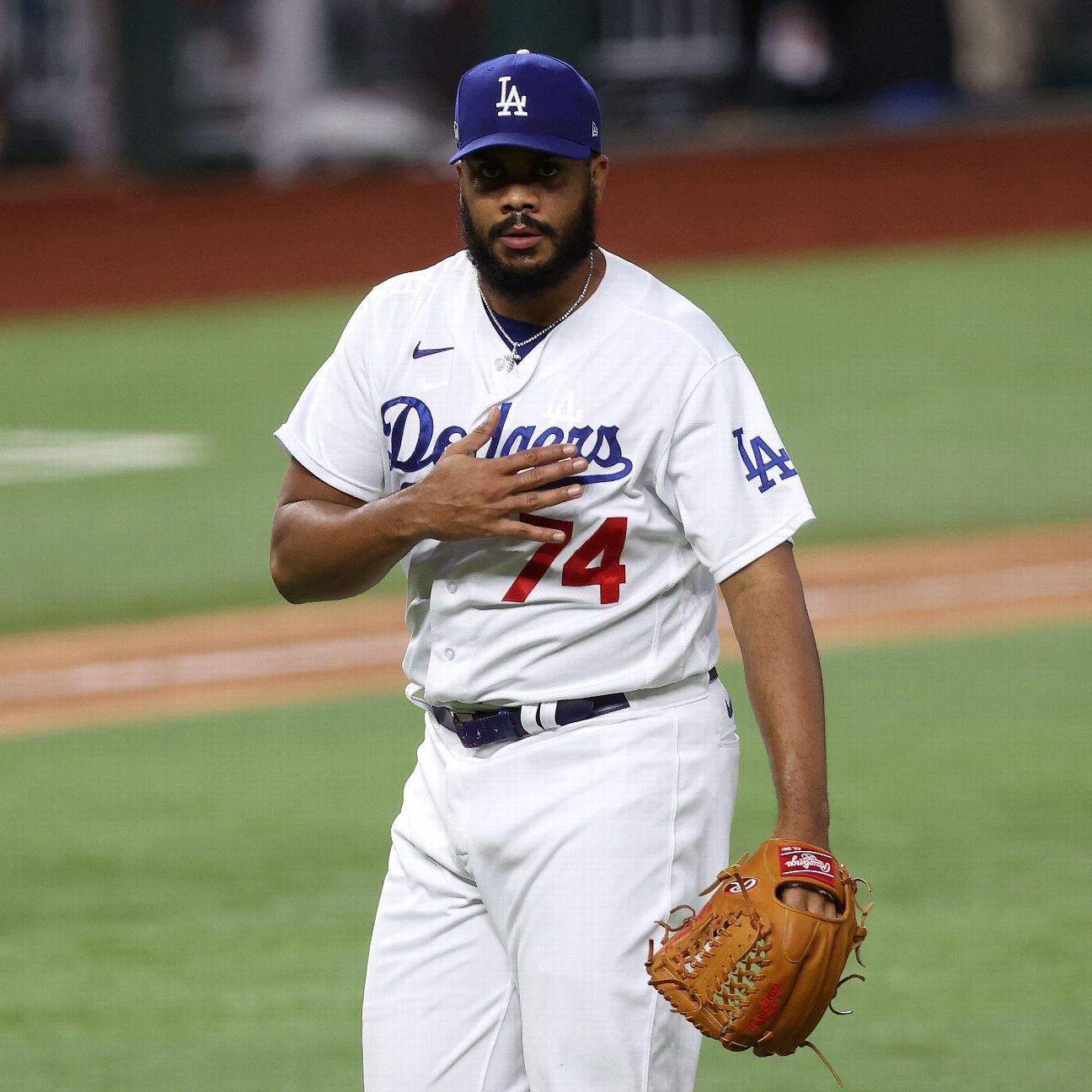 ARLINGTON, Texas — After retiring the final batter with a 94 mph fastball on Friday night, and striking out the side, Kenley Jansen glared at the Los Angeles Dodgers‘ dugout with an intensity rarely seen from the personable right-hander. The meaning behind it, Jansen said, was basically, “Let’s go!”

Jansen recorded the final three outs of Saturday’s 3-1 win over the Atlanta Braves in Game 6 of the National League Championship Series. This time the lead was by only two runs, half the cushion of his Friday outing, representing his first save since the Dodgers’ first postseason game 17 days ago. Jansen, who faced the bottom of the Braves’ order, was helped by a sliding catch from Joc Pederson to open the inning, then got routine fly outs from Nick Markakis and Pablo Sandoval. Six pitches, three outs to force a Game 7.

“If we wanna get to where we wanna be, and holding that trophy at the end of the year, we’re gonna need him,” Dodgers third baseman Justin Turner said. “He’s gonna be a big part of it. Two huge outings, not only for us but for him personally. And you can just see the confidence he has on the mound, attacking guys. That’s the Kenley Jansen I and all of us in there know and love.”

Jansen wasn’t bad this season — he finished with a 3.33 ERA, 33 strikeouts and nine walks in 24⅓ innings — but once again he wasn’t consistently dominant. The velocity on his cutter began to dip below 90 mph toward the end of the regular season, and he began the playoffs on unstable footing.

After Jansen failed to protect a three-run lead against the San Diego Padres in Game 3 of the division series, Dodgers manager Dave Roberts temporarily removed him from high-leverage situations. His next appearance was with a 14-run lead in the sixth inning of Game 3 of the NLCS. But Roberts noticed a smoother, more repeatable delivery in that outing. After Jansen struck out the side to easily hold a four-run lead in the ninth inning of Game 5, Dodgers shortstop Corey Seager said he saw someone who was pitching confidently again.

On Saturday, Jansen threw his cutter 90 to 91 mph and mixed it with a two-seamer that neared the mid-90s.

“The game’s honoring him,” Roberts said of Jansen. “I couldn’t be more happy and proud of him.”

Jansen, 33, has spent the past few weeks searching to get his upper half and his lower half in sync, a continual problem for someone with a 6-foot-5, 265-pound frame. A few days ago, through conversations with longtime pitchers Charlie Hough and Rick Honeycutt, both of whom still have ties to the organization, Jansen was able to rediscover the clean, simple delivery of his early years. The consistency, he believes, is starting to come.

“Ain’t no roles in the playoffs,” Jansen said when asked about being temporarily removed as the team’s closer. “It’s, ‘When can you be in the best position to help your team win?’ I’ve been here for a long time, and it’s nothing else to have a ring here with the organization. That’s the last thing I feel like I need to accomplish here. We want it. We want it for everyone, and the fans deserve it, and it’s about winning a championship here.” 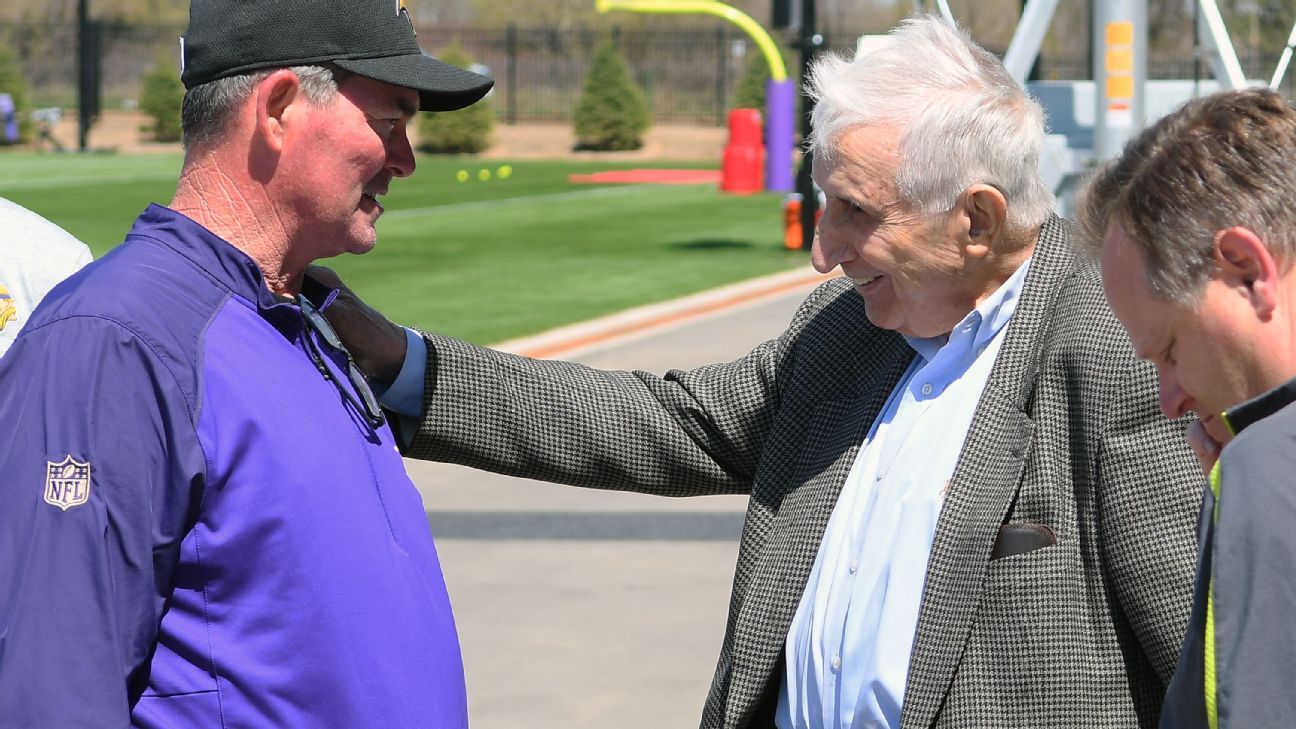 MINNEAPOLIS — Minnesota sports columnist and radio personality Sid Hartman, an old-school home team booster who once ran the NBA’s Minneapolis Lakers and achieved nearly as much celebrity as some of the athletes he covered, died Sunday. He was 100.

“It’s a sad day,” Carr told The Associated Press. “He is the Star Tribune in many ways, at least in the sports department. It speaks to his amazing life that even and 100 and a half years old, he passes away and we still can’t believe it.”

He kept up his age-defying pace even after his 100th birthday party on March 15 was canceled because of the coronavirus pandemic. Hartman continued to write three columns per week for the Star Tribune as a centenarian, four during football season, and served as co-host of a Sunday morning radio show on WCCO-AM in Minneapolis.

“I have followed the advice that if you love what you do, you never work a day in your life,” Hartman wrote in his column published on his 100th birthday. “Even at 100, I can say I still love what I do.”

“Obviously a Minnesota icon, and heard about the passing, so wanted to start off with that,” Thielen said. “Just heard a story from him the other day, and he was obviously a big part of this organization and was always around the facility, so we are grieving during this time.”

Hartman grew up poor on Minneapolis’ tough north side, the son of a Russian immigrant father and Latvian mother who at age 9 began selling newspapers on downtown street corners. He dropped out of high school in the 10th grade for a news run, picking up papers and leaving them in drop boxes.

In 1944, the circulation manager recommended Hartman for an internship on the sports desk at the old Minneapolis Times. A year later, he was in print with a roundup of news and notes, a style he continued throughout his career. Hartman always called himself a reporter, not a writer. After the Times folded in 1948, Hartman went to work at the Minneapolis Tribune covering his beloved University of Minnesota.

Former Vikings coach Bud Grant recalled attending the university after World War II and running into Hartman on Hartman’s first day as a beat writer. Grant and his wife became friends with Hartman, and when Grant announced his first retirement as Vikings coach in 1984, he shared the scoop only with Hartman.

“They’d say ‘off-the-record,’ and to Sid that was off-the-record. He never broke a confidence, with anybody I ever knew,” Grant once said.

Hartman was an unapologetic throwback to the days when the wall between sportswriters and the teams and players they covered was not as defined. Colleagues referred to “Sid’s Rules,” which applied to Hartman and no one else. “It was kind of the Wild West, and Sid was the top gunfighter,” said Dave Mona, Hartman’s “Sports Huddle” co-host since the WCCO-AM radio program debuted in 1981.

Often because of the favorable coverage he gave to local sports teams, Hartman was granted unparalleled behind-the-scenes access to players, coaches and executives. He was given free rein to roam where he wanted, when he wanted.

Hartman was instrumental in helping lure pro teams to Minnesota. In his autobiography “Sid!” (co-written with fellow Star Tribune sports columnist Patrick Reusse), Hartman wrote that in 1947 he offered $15,000 to the owner of the Detroit Gems of the National Basketball League for the franchise, then went to Detroit to deliver the check. The team became the Minneapolis Lakers, and Hartman was the de facto general manager. Led by big man George Mikan, the Lakers won the NBL championship in their first season and five NBA championships. Hartman left the Lakers operation in 1957, and the team moved to Los Angeles in 1960.

He did all that while continuing his newspaper work, a blatant conflict-of-interest by today’s standards but an accepted practice in those days.

Yet he always tried to outwork other reporters for scoops. He was a familiar sight at most games and news conferences, lugging a large, clunky, outdated tape recorder and a thick, black book stuffed with pages of phone numbers. From George Steinbrenner to Bob Knight to Pete Carroll, Hartman’s rolodex has long been a who’s-who of the sports world.

Hartman’s distinctive gruff, slurred speech and malaprops made him a favorite of listeners, media colleagues and the players and coaches he covered to imitate. On the radio, Hartman would sometime hang up on or chastise callers — “geniuses,” as Hartman called them — who voiced opinions he disagreed with. Despite his reputation as a curmudgeon, Hartman was routinely approached by fans for autographs and always obliged them.

In 2010, to mark his 90th birthday, a statute showing Hartman holding a radio microphone, carrying an oversized tape recorder and with a Star Tribune tucked under his arm was unveiled on a corner outside Target Center, the home of the NBA’s Minnesota Timberwolves.

“Part of my job was to bring him into the ’80s. Sometimes he came fairly easily and sometimes he didn’t,” said former Star Tribune editor Tim McGuire. “He always was too much of a booster, and he loved his Gophers. But he was always a newsman.”

Hartman also was a frequent critic of women’s athletics, which he thought cut into expenditures for men’s sports at University of Minnesota. “It’s archaic,” former Star Tribune sports editor Glen Crevier said of Hartman’s attitude in 2009, “but at least he doesn’t write negatively about them anymore. He just avoids them.”

Hartman’s son, Chad, followed his father into sports reporting, as play-by-play announcer for the Timberwolves and a local talk show host.

When his 100th birthday column was published, the Star Tribune put his career byline count at 21,149. 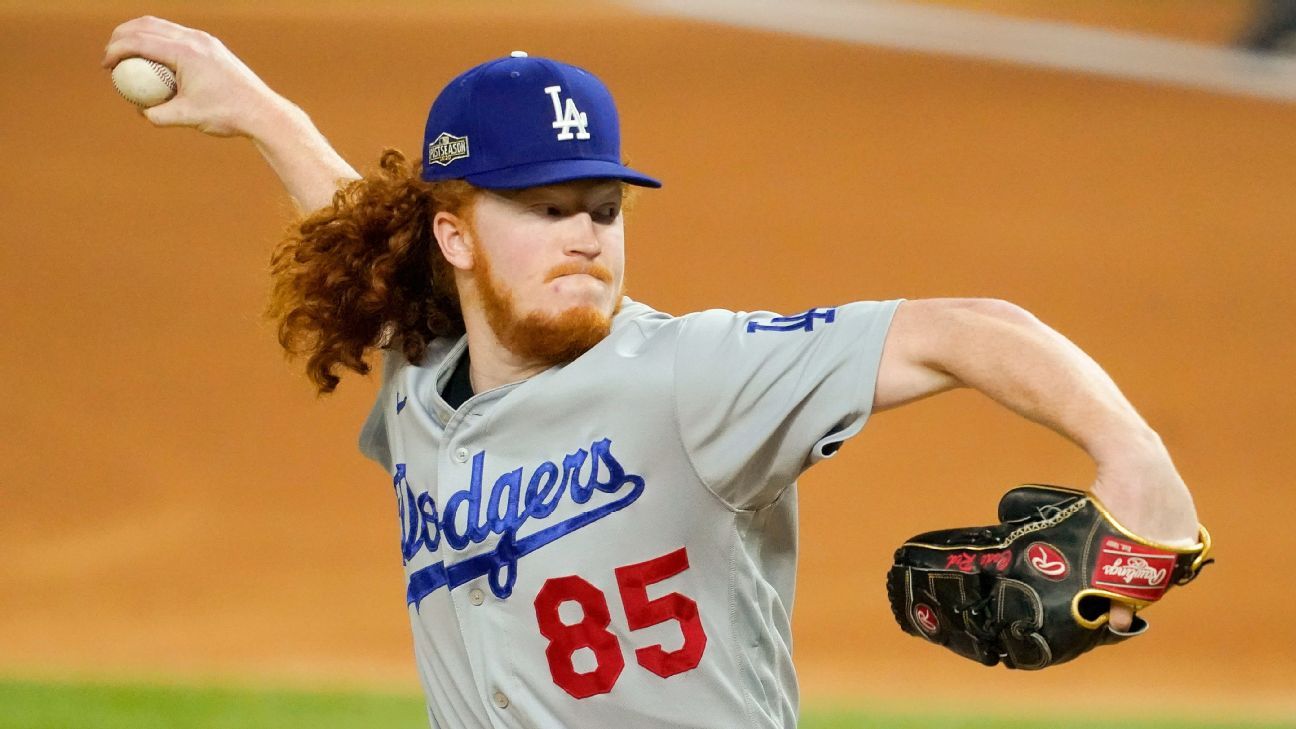 ARLINGTON, Texas — Dustin May, who only threw two innings in his Game 5 start, will start Game 7 of the National League Championship Series for the Los Angeles Dodgers on Sunday night, opposing Atlanta Braves right-hander Ian Anderson.

May, whose right arm has proven to be resilient, has faced only 18 batters in his two appearances in this series, the other coming in Game 1 on Monday. The Dodgers also have Tony Gonsolin on normal rest after his 88-pitch start in Tuesday’s Game 2. Julio Urias, who threw a career-high 101 pitches in his Game 3 start, might also be able to give the Dodgers an inning or two.

Those three should allow Dodgers manager Dave Roberts to save his high-leverage relievers — Brusdar Graterol, Blake Treinen, Victor Gonzalez, Pedro Baez and Kenley Jansen — for the later innings. The question is whether Clayton Kershaw will make a relief appearance, as he is prone to do in these situations. 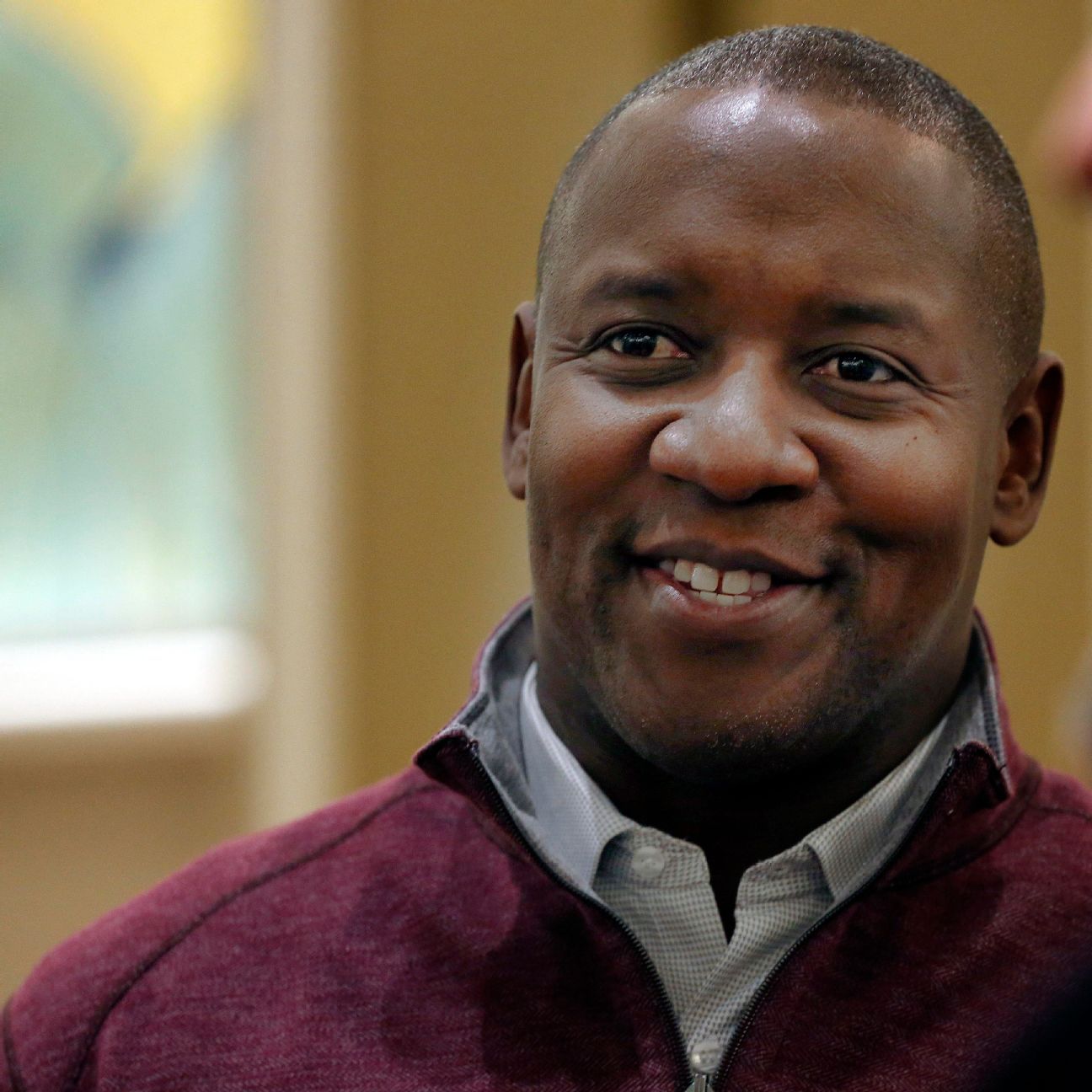 Hill was president of baseball operations for the past six years and provided continuity after a 2017 change in ownership, but his contract expired and he will not be back next season, CEO Derek Jeter said Sunday.

Hill joined the Marlins’ front office in 2002, and the next year they won the World Series. But this year’s 31-29 finish was their first above .500 since 2009, and they made the playoffs for the first time in 17 years.

Hill helped steer the Marlins through a coronavirus outbreak that nearly derailed their season. The Marlins beat the Chicago Cubs in the wild-card round of the playoffs before being eliminated by Atlanta and exceeded all outside expectations with a young, patchwork roster one year after losing 105 games.

Hill was general manager for six seasons before becoming president of baseball operations. He worked for three years in the Jeter regime as the organization underwent heavy turnover.

Hill had a hand in the record $325 million, 13-year contract Giancarlo Stanton signed with the Marlins in 2014. He later was involved in trading Stanton and All-Stars Christian Yelich, Marcell Ozuna, Dee Gordon and J.T. Realmuto as the Marlins rebuilt from the farm system up under Jeter.

What channel is Leeds vs Wolves on? TV, live stream, kick off for Premier League game

Packers’ lead over Bucs evaporates after Aaron Rodgers’ two INTs, including a pick-six