Gareth Bale’s second Tottenham debut was ruined by a stunning West Ham fightback from 3-0 down in the final eight minutes to draw 3-3 on Sunday.

Spurs raced to a 3-0 lead within 18 minutes as the free-scoring combination of Harry Kane and Son Heung-min looked to have Jose Mourinho’s side cruising towards a win that would have put them second in the table.

The opener came inside the opening minute as Kane’s sumptuous long pass in behind the West Ham defence picked out Son and the South Korean cut inside to curl into the far corner.

The roles were reversed for Kane’s first goal as the England captain produced a stunning piece of skill with a nutmeg on his marker before firing low into the bottom corner.

Sergio Reguilon also made the move from Real Madrid to Tottenham last month and his rampaging runs from left-back are reminiscent of Bale’s early days at Spurs before the Welshman pushed further up the field.

The Spaniard set up Kane’s second with a pinpoint cross for the striker to head home at the far post.

Only a fine save from Lukasz Fabianski prevented Son also registering a double in a blistering opening quarter from Spurs.

Mourinho lauded Tottenham chairman Daniel Levy as a “genius” for the deals he made in the transfer market to give his manager a depth of squad capable of challenging for trophies.

That was shown as Bale was then introduced as a substitute and showed no lack of confidence by striking a free-kick with his first touch but the ball flew straight into Fabianski’s grasp.

Kane came within inches of sealing his hat-trick with a shot from outside the box that hit the post, but Tottenham’s defensive deficiencies saw a comfortable afternoon completely unravel.

Balbuena’s header from Aaron Creswell’s free-kick started the collapse before Sanchez turned a dangerous ball across the box into his own net.

Bale should have sealed the three points and a dream debut but he flashed a shot wide with just Fabianski to beat as the game entered stoppage time.

And that would come back to haunt Mourinho’s men when a Cresswell free-kick was only cleared to the edge of the box and Lanzini arrowed an unstoppable shot high past Hugo Lloris.

Bale came from the bench in the defeat and his return was a key talking point after the game but Mourinho was having none of it.

Klopp: It was not offside

Fulham striker Aleksandar Mitrovic missed a penalty and gave away a spot-kick as Sheffield United rescued a 1-1 draw in a battle of the Premier League strugglers on Sunday.

Mitrovic fired over with his second half penalty when the score was 0-0 at Bramall Lane.

Mitrovic is the first player to commit the unwanted penalty double in the same Premier League game since Mikel Arteta for Arsenal against Fulham in 2012.

As if that wasn’t enough frustration for Cottagers boss Scott Parker to endure, he also had to watch Mitrovic miss two golden chances in stoppage-time.

Fulham at least moved off the bottom of the table after taking their first point at the fifth attempt, following last season’s promotion from the Championship.

United also avoided defeat for the first time in five games this season.

After a scrappy first half in keeping with both teams’ struggles, Fulham should have gone ahead 10 minutes into the second half.

Robinson was adjudged to have handled in the area, but Mitrovic blazed his penalty over the bar.

On-loan Leipzig winger Lookman put Fulham ahead in the 77th minute with a superb solo effort, beating two men before firing into the roof of the net.

But Mitrovic was penalised for a high foot on Robinson in the 85th minute following a VAR check and Sharp made him pay as he drove his penalty down the middle.

Palace took the lead in the 19th minute when Tariq Lamptey was harshly adjudged to have pulled down Michy Batshuayi in the penalty area.

Ivory Coast forward Wilfried Zaha sent Brighton keeper Mat Ryan the wrong way from the spot for his fourth goal of the season.

But, after a poor clearance from Palace defender Joel Ward, Argentine substitute Mac Allister fired home via a slight deflection from the edge of the area in the 90th minute.

Brighton had defender Lewis Dunk sent off for a two-footed lunge on Gary Cahill in stoppage-time.

Palace have now gone three league games without a win, while Brighton have won only once in their five matches this season. 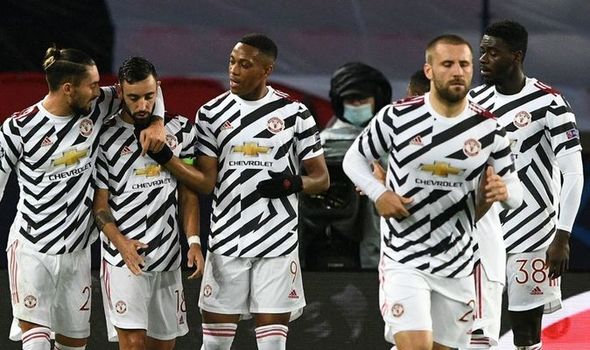 Real Madrid made an embarrassing start in the Champions League on Wednesday by losing 3-2 at home to a depleted Shakhtar Donetsk, their second consecutive defeat ahead of the Clasico against Barcelona on Saturday.

Shakhtar were without 10 first-team players and nine members of staff due to coronavirus infections but recorded a remarkable win at the Alfredo di Stefano stadium, after scoring three times in 13 first-half minutes.

Strikes from Tete and Manor Solomon, either side of a Raphael Varane own-goal, gave the Ukrainian champions a shock lead at the interval and while Luka Modric and Vinicius Junior pulled goals back, Madrid fell short.

Fede Valverde thought he had grabbed an equaliser in injury time but his deflected shot was ruled out after VAR showed Vinicius was off-side.

‘That’s why I kept silent’: $630k-a-week star lashes out at disloyal Arsenal

A huge upset puts Madrid on the back foot in Group B, especially as Shakhtar were in theory their weakest opponent, the others being Inter Milan and Borussia Moenchengladbach.

But it also cranks up the pressure, on the Real team ahead of the Clasico in La Liga on Saturday, and on their coach Zinedine Zidane, who had just overseen a dreadful display in last weekend’s loss to Cadiz.

Zidane paid the price for rotating his starting line-up for that game and shuffled his team again, presumably with the upcoming clash at the Camp Nou in mind.

Toni Kroos and Karim Benzema both started on the bench and had to come on in the second half while Eder Militao, in for the injured Sergio Ramos, Rodrygo and Marco Asensio were given chances to impress.

Shakhtar’s three-goal flurry before halftime began with Viktor Korniyenko beating Militao too easily and as Marcelo was pulled across to cover, he left Tete free behind him to finish Korniyenko’s poked pass.

Luka Jovic should have equalised with a free header but instead Shakhtar scored again, Tete’s rasping effort from range palmed out by Thibaut Courtois and prodded in for an own-goal by Varane has he tried to stop Dentinho reaching the rebound.

Madrid looked shell-shocked but it got worse.

Tete raced in behind and this time a brilliant backheel allowed Solomon to take a touch and fire in number three.

Benzema replaced Rodrygo at halftime but it was Modric who kickstarted the comeback attempt, shifting right past two Shakhtar defenders before unleashing a superb shot into the top-right corner.

Tete then missed a sitter for 4-1 and Vinicius capitalised. The Brazilian came on as a substitute, stole the ball back and found the net, seemingly all in one movement.

Madrid had 31 minutes to rescue a point but their momentum stalled. Benzema’s finish was blocked by Valerii Bondar and Shakhtar thought they had a fourth but it was ruled out for off-side.

Valverde celebrated an equaliser in injury time when his deflected shot from the edge of the area crept in but there was a final twist in the tale as VAR showed the off-side Vinicius was obstructing the goalkeeper’s view.