Verstappen endured a tougher than expected run throughout the two sessions as the Red Bull fell behind several middle of the pack cars.

But it was during the first practice session when Verstappen was left seeing red as he sat stuck behind the Williams of George Russell.

Verstappen had closed the gap behind Russell, but voiced his expletive displeasure that the Williams driver didn’t move aside to allow him past.

“Unbe-f***ing-livable, what an unbelievable w**ker. Why does he stay in front?” Verstappen said.

The tirade didn’t go over well with fans who couldn’t help but question what Verstappen was expecting Russell to do going around the bends.

Verstappen’s frustration would have only grown as the Red Bull slipped down the leaderboard with the Dutchman finishing seventh on the timesheets after the second practice session.

His teammate Alex Albon could only muster a 12th place finish, both drivers were more than 1.5 seconds off the time set by Mercedes’ Valtteri Bottas.

Verstappen knows it will be a challenge to get ahead of their rivals on a track not suited for their car.

“We know that this track is not the best for us, but we were also trying out some downforce levels and seeing what is the best option,” Verstappen said.

“[In] FP2, yeah, I think we could have done a bit better, but again, we were testing a few things out. Some worked, some didn’t, so it gives us a few ideas for tomorrow.”

Bottas forecast he and teammate Lewis Hamilton would be faster and more competitive on Sunday after they dominated the practice sessions.

The Finn topped the times by two-tenths ahead of Hamilton as the two ‘black arrow’ men wound up more than a second clear of their nearest rivals.

“It was a messy day with a lot of interruptions,” said Bottas. “Lots of red flags and quite limited running, so I am sure we have a lot more to come,” he added.

Aussie star Daniel Ricciardo was the best of the rest on a day that was filled with cars spinning off the track.

Ricciardo enjoyed his best practice day of the season after finishing second in the first session before ending as the third fastest driver during the second session.

“It was probably the first time I’ve ever really been hooked up around here.

“It felt good! Was good really out of the box, we didn’t make too many changes today.”

He remained hopeful that a podium could be within reach, but pinned it on the result that would come out of qualifying.

“If we could put it here in quali, then for sure, I’d be confident of that,” he said.

“But I think there’s all the cars that are around two or three-tenths (of a second) of us – I’m sure that’ll be the battle tomorrow. I think it’s all going to close up, so if we can get to stay that tenth ahead, we’ll look alright.” 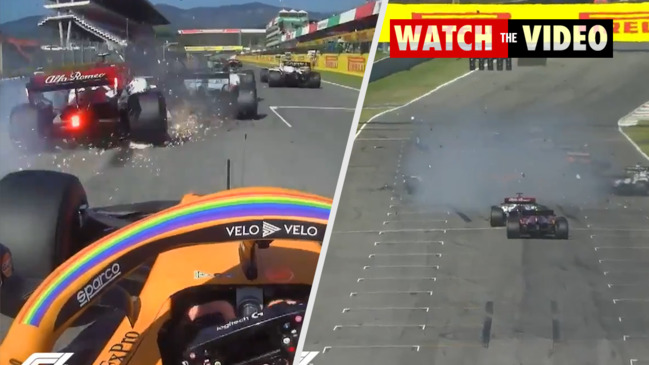 The Adelaide 500 will no longer be run, with the South Australia Tourism Commission confirming on Thursday that the contract would not be extended.

The current contract was set to end next year but the race was scrapped due to the coronavirus pandemic.

SVG the Champion of Bathurst

“At the end of the day, with the current set of circumstances we are not in a position to deliver a sustainable, successful future for the event for next year and beyond,” Harrex said.

“Due to the high level of uncertainty around the ability of the event to proceed in 2021, the likely impact on the event for both the consumer and commercial market, and the long-term decline in the core motorsport fan, a decision has been made that it will not be possible to hold the race next year, and to not seek a contract for future years.”

The race was first held in 1999 and quickly established itself as the traditional season curtain-raiser, hosting the first race of the season in all but two of the past 18 years.

“We regret that the South Australian Government has decided to cease holding this event,” a press release from Supercars read.

“Supercars is looking forward to providing our fans with an exciting 2021 Championship across Australia and New Zealand.

“If, at any time in the future, the South Australian Government decides to recommence the Adelaide 500, Supercars would be delighted to be there.”

Mark Webber has predicted his protege Oscar Piastri can be racing in Formula One by 2023 as the young gun prepares for his test drive with Renault.

As the Australian teenager gets set to jump behind the wheel of a Formula One car for the first time in Bahrain on Friday, Webber said the goal was to have Piastri in an F1 seat within two years.

Piastri confirmed his status as Australia’s rising star of international motorsport after claiming the Formula 3 title in a thrilling finale at the Tuscan Grand Prix last month, which is set to propel him to Formula 2 next year – the rung just below Formula One.

Webber said Piastri was “in demand” among the F2 teams and hoped to have a seat for him confirmed within weeks.

The Aussie nine-time Grand Prix winner said a Formula One drive in 2023 was a realistic aim for the 19-year-old Melbourne racer.

“Every year is a huge year, every race is a big deal in the next few years for Oscar,” said Webber, who manages Piastri.

“It is ramping up really hard now. Next year (F2) will be another big step again.

“So it’s a year or two years (for him to get into Formula One). A year would be very quick, two years is going to be more realistic, so you are looking at 2023.

“We have to be ready for anything in terms of his performance in formula at the moment, there are a lot of seats moving around and looking for young fresh blood that’s delivering is something which is important.

“Even though unfortunately there are a lot of wealthy fathers buying some teams at the moment which is not helpful, hopefully talent will put him in good stead just within Renault because Renault are a factory team and they want the best guys in their cars.”

Piastri earned his F1 test drive with his fellow Renault Sport Academy drivers as a “reward” for his championship win in Formula 3.

Webber said Piastri deserved the opportunity and predicted it would only help his Formula 2 performances next year.

“It’s a big moment for any Australian to get a run in the real stuff. It’s going to be a big step up, he knows that,” Webber said.

“The team at Renault have prepared him very well for it in the simulator. He is off to one of the biggest days of his life so I’m sure he is going to soak it up and enjoy it.

“He deserves it. He won the Formula 3 championship as we know and it’s a bit of a present for him to have done that.

“Oscar technically didn’t need to be in this group of testing, but because of his results this year they have brought that forward to a degree and are giving him a run which is brilliant.

“It’s real stuff. It’s not just a demo run. He’s going to be a tired boy and they are sending out very good engineers who I have known from when I was a Renault test driver 20 years ago.

“So it’s a huge moment and it starts to get real when you are exposed to that level of professionalism … it is only going to help him in his Formula 2 season next year.”

Formula 1 is set to bolster its schedule for the 2021 season with a whopping 23 races slated, with two triple-headers packing out the calendar.

The heavily revised 2020 calendar was whittled down after the COVID-19 pandemic caused 13 races to be cancelled, but F1 has reportedly made it clear that next season will run closer to normal.

According to Motorsport.com, all 10 teams were handed a first draft of the schedule in a meeting on Monday, where F1 and FIA officials were also present.

The calendar will largely be the one which was originally scheduled for this season with the addition of a grand prix is Saudi Arabia and the Dutch Grand Prix moving to a later date.

The season will start at its now traditional home of Melbourne on March 21, a week later than usual, with the Bahrain Grand Prix expected one week later and the Chinese Grand Prix on April 11.

The Dutch Grand Prix at Zandvoort was due to kick off the European season this year but will now form a leg of a European triple-header with the Belgian Grand Prix and the Italian Grand Prix after the mid-season break.

It means the Spanish Grand Prix will return to its own traditional home of opening up the European season.

The dates for the second half of the season are not as set in stone yet but there is expected to be a second triple-header in Singapore, Russia and Japan.

This second triple-header will reportedly allow the space for the street race in Jeddah towards the end of the season, amid plans for construction of a new circuit on the outskirts of Riyadh in the future.

The Brazilian Grand Prix is also set to move from Sao Paulo to Rio de Janeiro, although the race is currently under threat due to pressure from environmental groups.