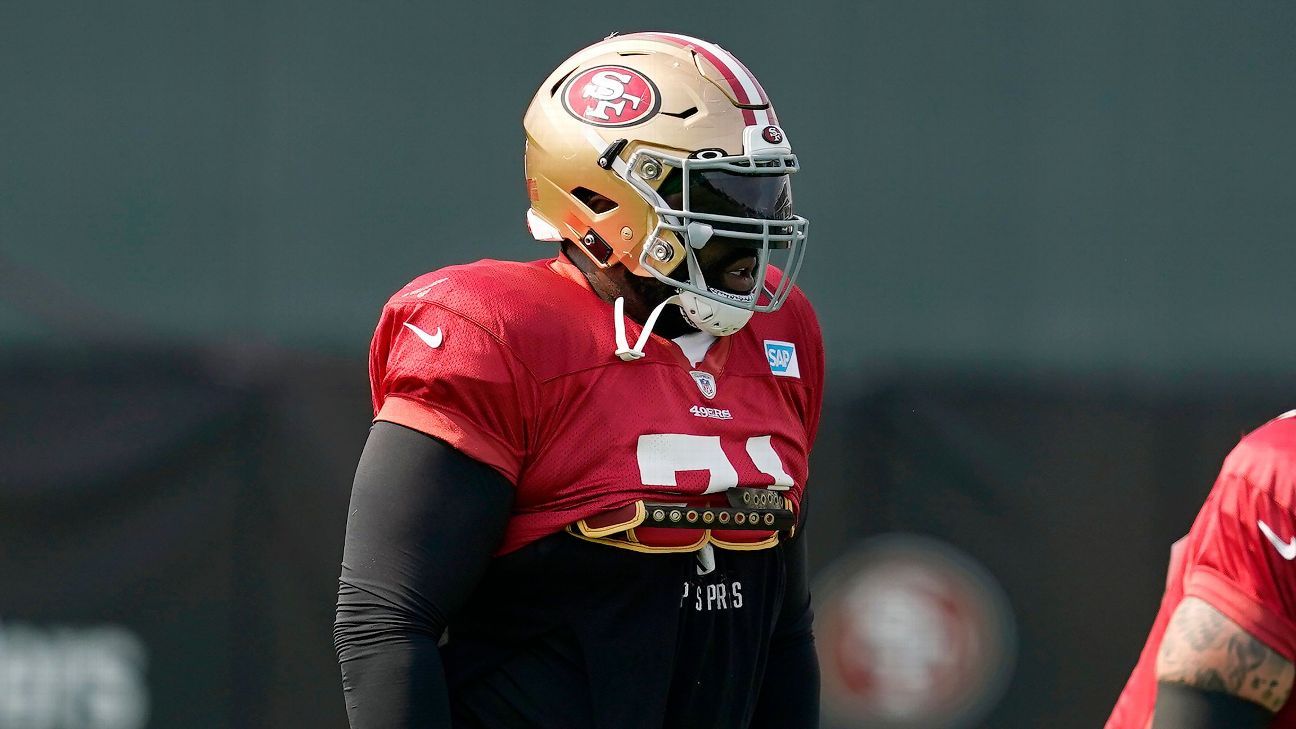 SANTA CLARA, Calif. — After a layoff of 623 days, San Francisco 49ers left tackle Trent Williams reintroduced himself to the NFL in resounding fashion.

On the final play of the first quarter of the Niners’ 24-20 loss to Arizona on Sunday, Williams threw a bone-jarring pancake block on Cardinals linebacker Jordan Hicks that almost immediately went viral.

“I think that’s one of the best ones I’ve probably had, probably put on tape,” Williams said. “I’ve had some good shots where I’m out on the screen and kind of catch a little guy, but in the box it’s a lot harder to get those type of blocks. So, I think it would probably rank at the top of my career.”

With Hicks distracted by the 49ers’ pre-snap motion and keying on other players, he never saw the 6-foot-5, 320-pound Williams coming.

“I knew I would have pretty much a kill shot on him,” Williams said of Hicks, who is 6-1, 236. “I just knew I had to get there pretty quick because if you wait on him, he’ll make you miss, they’re a lot smaller. I just wanted to kind of get to the second level as fast as I can and take away the option to go either way and just kind of, for lack of a better expression, just kind of lay him out.”

The block provided a quick reminder to the 49ers, Cardinals and the rest of the NFL world as to why Williams is a seven-time Pro Bowler and widely regarded as one of the league’s best tackles.

Williams said Niners coach Kyle Shanahan sent him a video of the block with a message reading, “Wow, it’s good to have you back” on Sunday night. The play was also shown in a team meeting this week, drawing plenty of oohs and aahs from teammates and the coaching staff, though Williams is quick to note that it was far less gratifying coming after a loss.

“I think we all saw it,” defensive coordinator Robert Saleh said. “I don’t know many human beings his size who can do something like that to a linebacker, nonetheless. Usually you see those guys rolling out on DBs, not a linebacker. No hesitation, run through another human being like he wasn’t even there. It was awesome.”

For as satisfying as the block was, Williams said he was just happy to be back playing football after such a long layoff. The 49ers acquired Williams, 32, on the third day of this year’s NFL draft in a trade with the Washington Football Team for a fifth-round choice this year and a third-round pick next year.

That deal came after a tumultuous year-and-a-half standoff with Washington management over the handling of his injury issues as well as his contract. Before Sunday, Williams had not appeared in a regular-season game since Dec. 30, 2018.

As the Niners and Cardinals warmed up, Williams said players and coaches from both teams made it a point to welcome him back.

“It felt great being back out there,” Williams said. “I waited for it for a long time. At one point, it felt too good to be true. But once that ball kicked off, it was like I was back at home, back where I’m supposed to be.”

To defensive end Nick Bosa, Williams’ success against Jones stood out even more than the block on Hicks.

“I think that [block is] super impressive and that’s something that not many tackles do but I’m more impressed with how he held up against Chandler Jones the entire game,” Bosa said. “He made Chandler look like an average dude out there which is almost impossible to do, and for him to do that first game back, that’s pretty unbelievable. It’s really cool to have somebody who is the best at what they do — bar none No. 1 best at what they do — on your team and I watch him every day and I’m just happy he’s on my team.”

Michelle Kenney disappointed not to hear from Maurkice Pouncey, hopes to work with Pittsburgh Steelers in future 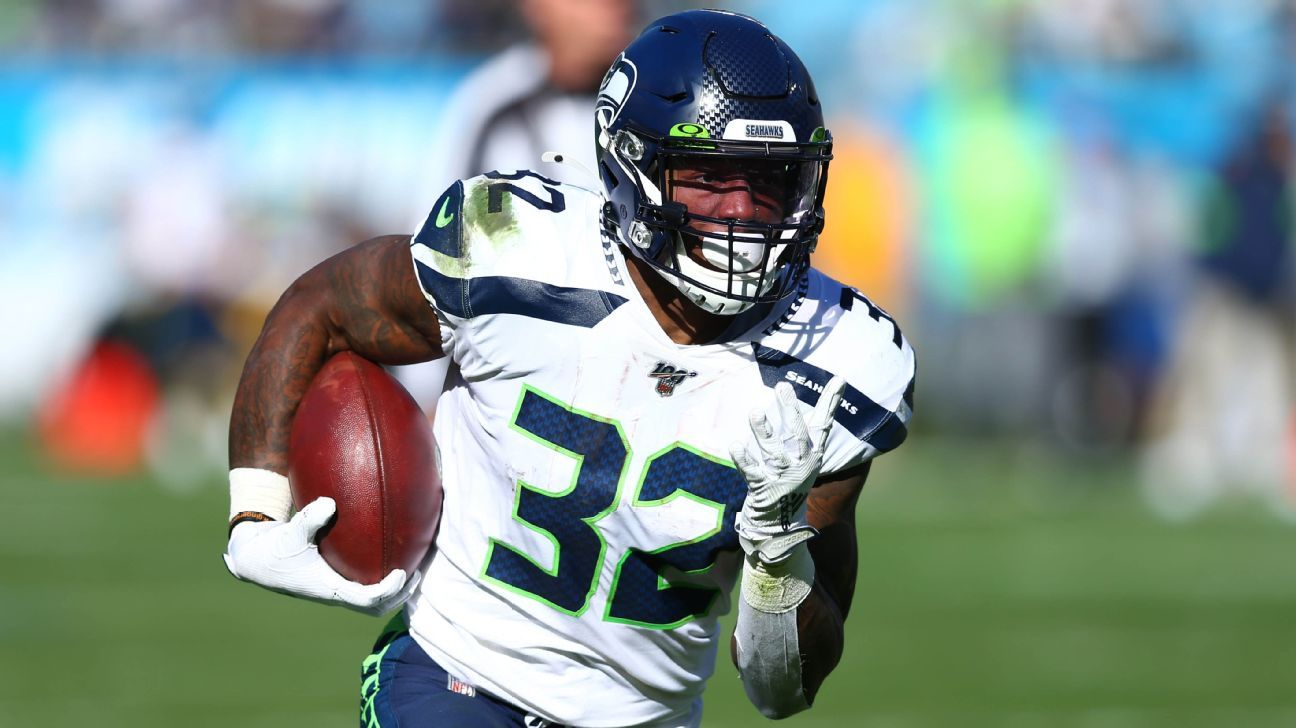 Carson suffered the injury in the first half of Sunday night’s 37-34 overtime loss at the Arizona Cardinals and did not return to the game.

“There’s something there that we could see,” Carroll said of Carson’s MRI. “It’s just week-to-week, so we’ll see what happens. We don’t know. He was real determined to say, ‘I can go with it,’ but we won’t know until the end of the week, for sure.”

That’s just the start of the injuries the Seahawks (5-1) are dealing with in a suddenly banged-up backfield.

Veteran Carlos Hyde and rookie fourth-round pick DeeJay Dallas were their only available tailbacks by the end of Sunday night’s game, after Carson and Travis Homer went down hurt. But Carroll is unsure of Hyde’s status for this week due to tightness in his hamstring. The coach said Homer has a knee bruise and not an injury, adding, “So that’s something he has a chance to recover from.”

The Seahawks have no other tailbacks on their active roster or practice squad. Rashaad Penny, their 2018 first-round pick, is still on the physically unable to perform list as he works his way back from a knee injury. Carroll said Penny is “getting close” to practicing, but the coach didn’t give the impression Penny would begin doing so this week.

It’s a potentially problematic situation for the Seahawks given how COVID-19 protocols make it difficult for teams to adjust to injuries on the fly. Players must go through several days of testing before they’re allowed to enter an NFL facility. That will make it impossible for the Seahawks to sign a free agent in time to reinforce their backfield for this week’s home game against the San Francisco 49ers (4-3), unless that running back had already started or completed his testing.

The Seahawks are hoping to have All-Pro strong safety Jamal Adams back this week, but Carroll said it isn’t clear whether he’ll be ready to practice by Wednesday. Adams has missed the past three games with a groin injury. Seattle had its bye during that span.

“I talked to him on Saturday before we left, and his workouts are going great and all that,” Carroll said of Adams. “He really wants to get back, but he’s going to have to show it that he’s capable of doing all the stuff that we need him to do football-wise. Because he’s so close to being back, I think this will carry into late in the week and we’ll see how it works out. But I can’t tell you conclusively right now.”

Carroll expects defensive end Rasheem Green (neck) to practice this week with the hope of playing next week. He has been on injured reserve, as has wide receiver Phillip Dorsett. Carroll said Dorsett is running at 90 percent capacity but isn’t sure if Dorsett will practice this week.

Cornerback Shaquill Griffin is also dealing with a nagging hamstring injury in addition to the concussion he suffered against Arizona, Carroll said.

The 2,875 yards Seattle’s defense has allowed this season are the most through six games in NFL history, according to the Elias Sports Bureau. 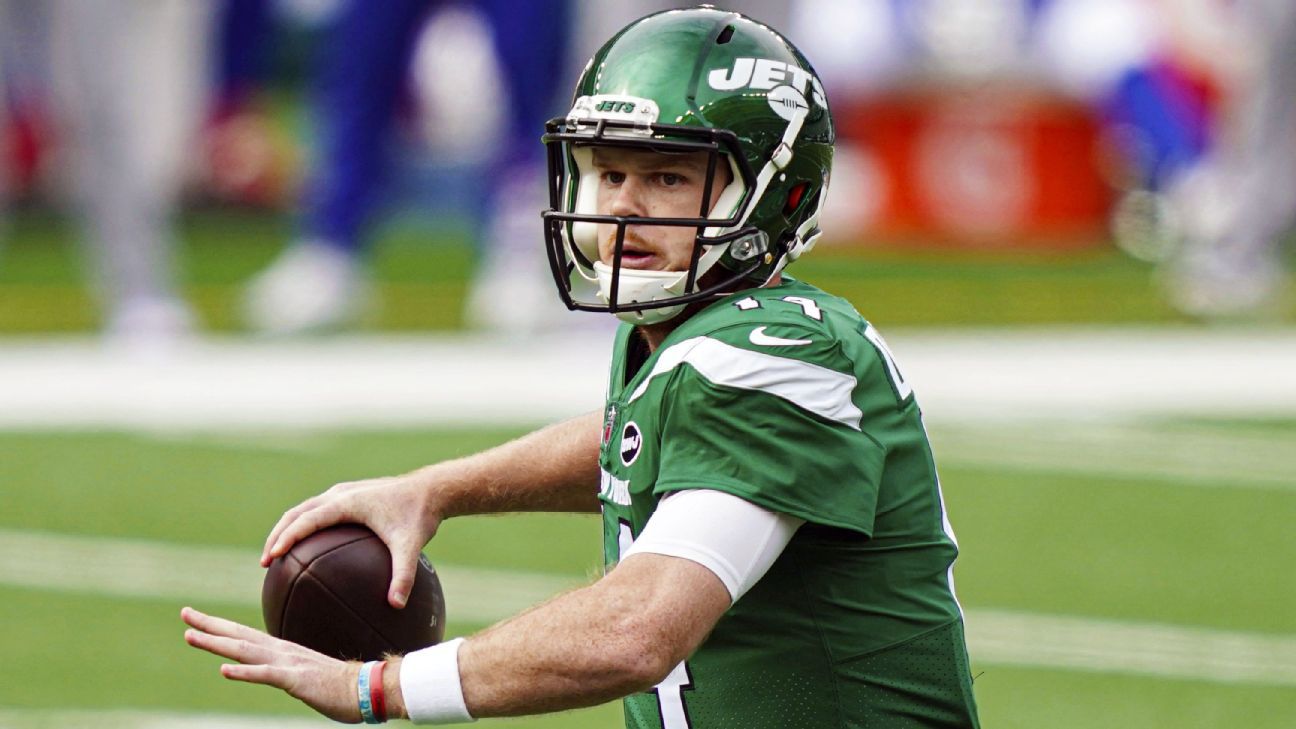 Coming off one of the worst statistical games of his career, New York Jets quarterback Sam Darnold received a pep talk and a vote of confidence from coach Adam Gase.

“I just keep thinking, ‘He’s 23, none of this can be easy,'” Gase said Monday, adding that he spoke with Darnold on Sunday night. “He’s a guy that did so much good in college and won a lot of football games. Things haven’t always gone as smoothly as everybody always hopes when they get to the NFL.”

The Jets haven’t won any games this season, as Darnold — expected to make a big jump in the second year under Gase — has shown signs of regression. The slump has fueled questions about Darnold’s future, with speculation the Jets might draft Clemson star Trevor Lawrence if they land the top pick.

In Sunday’s 18-10 loss to the Buffalo Bills, Darnold passed for only 120 yards with two interceptions for a 31.1 passer rating, the second-lowest of his career. It was a horrible offensive performance by the Jets (0-7), who managed only four yards in the second half — the team’s fewest yards in a half in 40 years.

Gase absolved Darnold of any blame, putting it squarely on the offensive line, which allowed six sacks. Gase said “it was collapsing quick on him” and he “didn’t have a lot of time to throw the ball.” When he did, the throws were tight-window attempts.

In five starts, Darnold has twice as many interceptions (six) as touchdown passes (three). His numbers have declined from last season in all the major statistical categories.

“If you look at it statistically, we’re not good anywhere statistically,” he said. “What I see in practice a lot of times, I see things that were better than last year. When we get to games, we just have to figure out a way to protect him and let him get in rhythm. I saw some really good things the first half [Sunday]. Then it started getting really muddy in the second half.”

Darnold said he remains upbeat, although he admitted his interception at the end of the first half was “a terrible mistake, something I truly feel won’t happen again.” He called it a “dumb decision,” a pass into heavy coverage.

He was under duress throughout the game, as the Bills cranked up their safety blitzes in the second half. Offensive coordinator Dowell Loggains, calling plays for the first time, had no answers.

The rebuilt offensive line was supposed to be improved this season, but it has allowed 24 sacks.

“I think everyone is frustrated. I don’t think it’s unique to Sam,” guard Greg Van Roten said. “We need to put him in a position to be successful. If we, as an offensive line, are playing like we did [Sunday], we’re not giving him a chance to show what he can do. 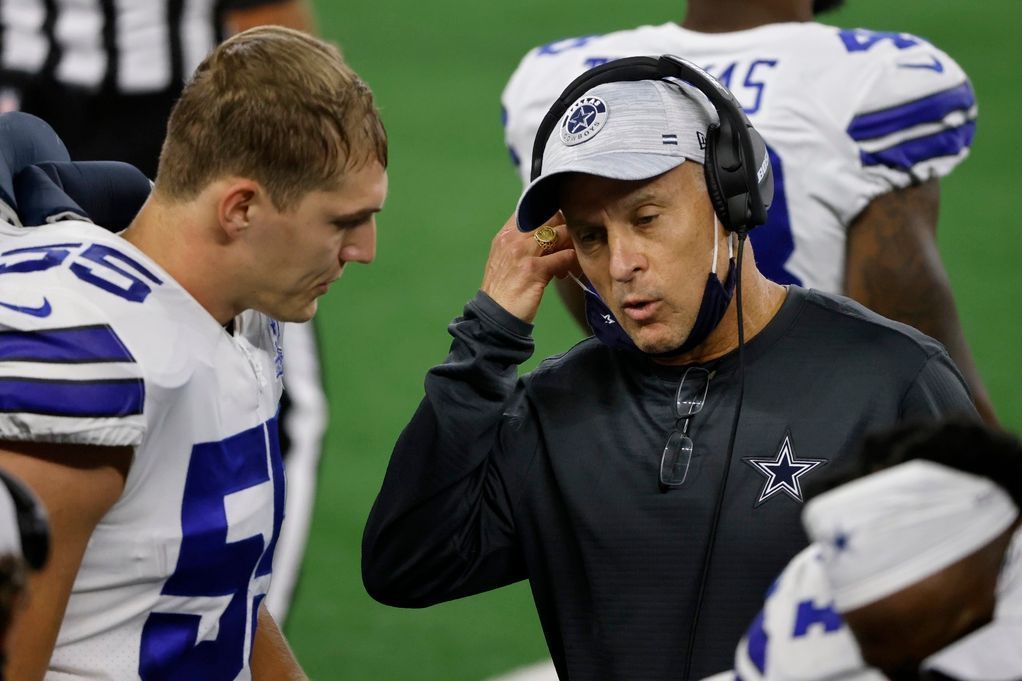 FRISCO, Texas — When the Dallas Cowboys practice Wednesday, defensive coordinator Mike Nolan might be on the injury report. The reason? Tabasco.

Nolan had to step away from his weekly conference call with reporters Monday because he got some hot sauce in his eye in the middle of answering a question about the effectiveness of pass rusher DeMarcus Lawrence.

“He’s been active every week as far as, I think, disrupting the quarterback. He’s escaped several times to do that,” Nolan said. “Obviously, the frustration for him as well is — look, it’s when he misses them. Whoop, excuse me. I’ve got something in my eye. Just had some Tabasco on my finger and it went in my eye, that wasn’t good. Ugh. Terrible, geez. I’m sorry.”

It’s been that kind of season for Nolan.

The Cowboys are on pace to allow 555 points this season. They have given up 243 points so far, which is more than they have given up overall in 11 seasons in franchise history, not counting the strike season in 1982, and equal to what they allowed in 1992.

Nolan was able to clean out his eye and return to the news conference.

“My eye feels a lot better,” Nolan said. “But it was burning.”