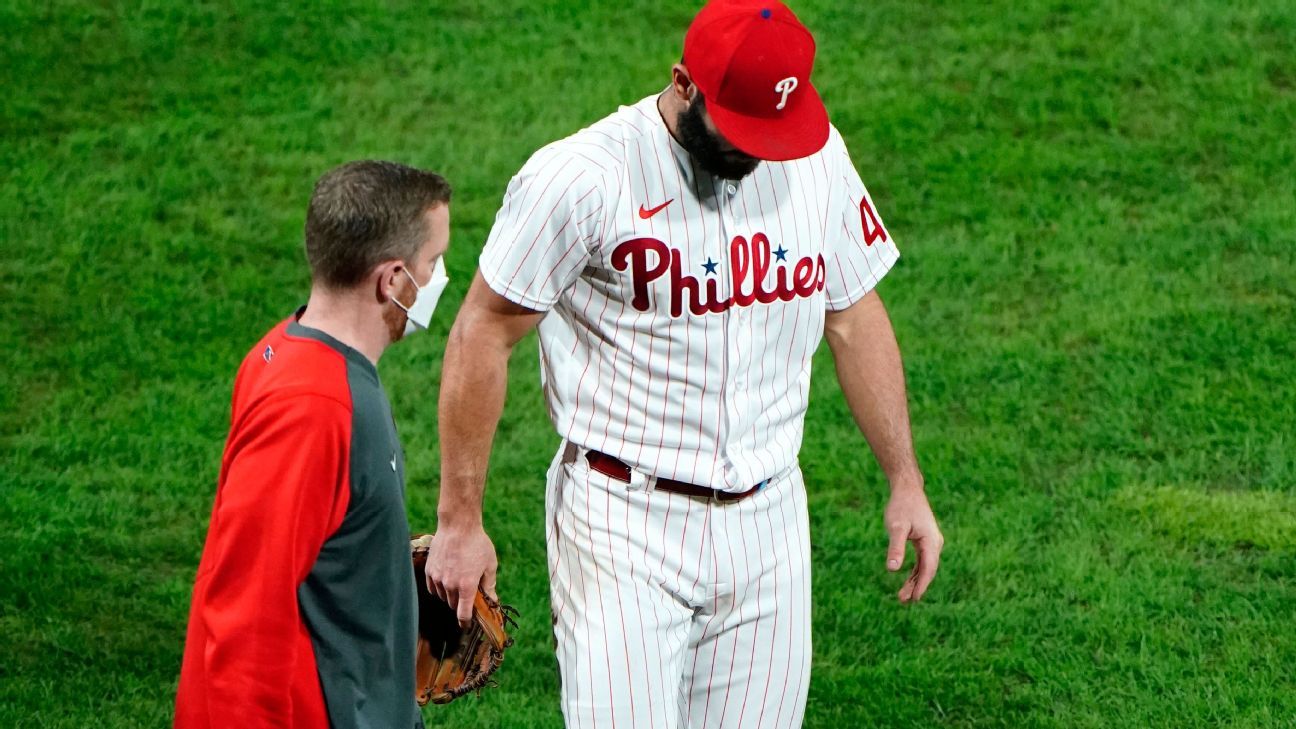 PHILADELPHIA — Jake Arrieta promised he’d be ready for the postseason, or sooner. Now the Philadelphia Phillies have to get there.

Arrieta pitched effectively into the sixth inning before leaving with a hamstring injury, Didi Gregorius hit a two-run homer and the Phillies beat the New York Mets 4-1 Tuesday night.

Arrieta (4-4) allowed one run on Brandon Nimmo‘s homer and eight hits in 5 1/3 innings. But he walked off the mound, grabbing the back of his right leg, after hitting Andres Gimenez with a pitch to load the bases.

“I’ll be back for the playoffs, there’s no question in my mind about that. I think I can be back sooner than that,” Arrieta said.

The 2015 NL Cy Young Award winner said he sustained a similar injury in 2017 with the Chicago Cubs.

“In 2017, I had to miss two starts but that’s because I tried to come back prematurely,” he said. “There’s no need to rush this, but I’m going to do everything in my power with treatment with soft tissue work, making sure my tissue is hydrated and everything’s ready to go. If I continue to do that and take care of myself, I don’t intend to miss too much time.”

Romero tossed two innings, Tommy Hunter got two outs and Hector Neris finished for his fourth save in seven chances. 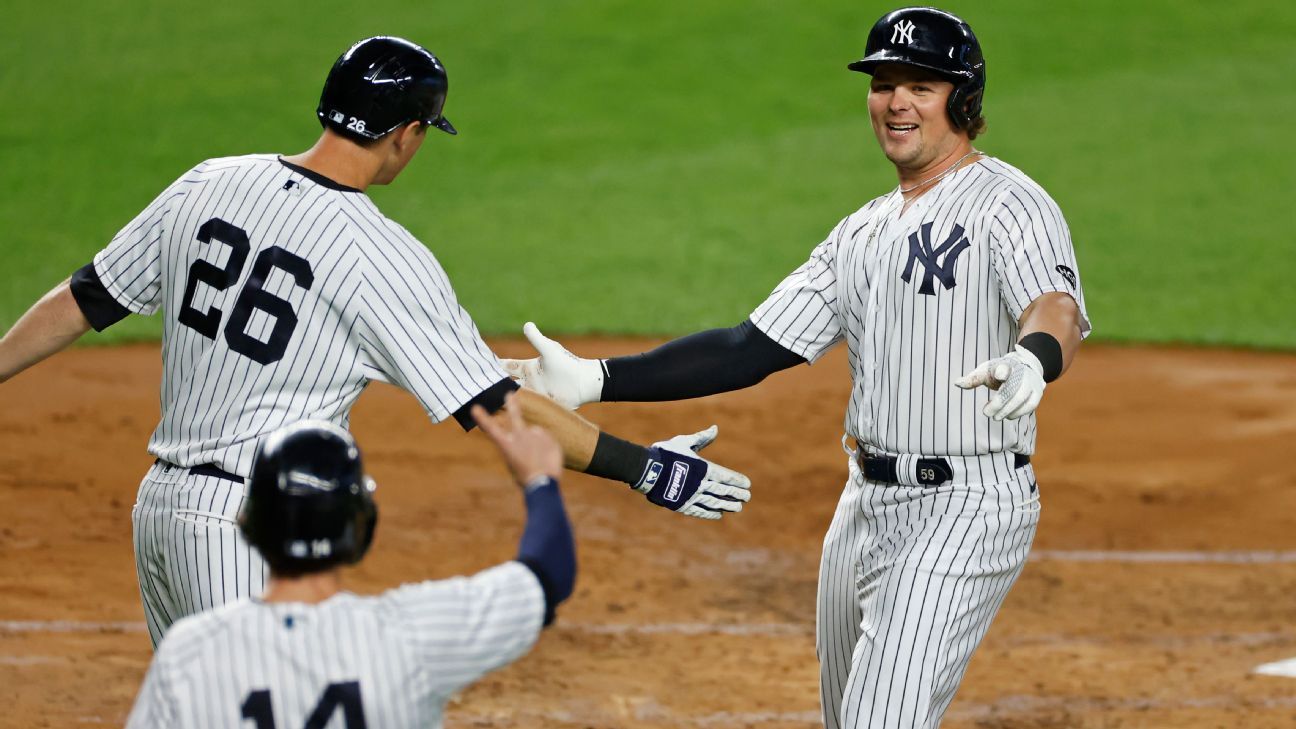 NEW YORK — The Yankees have transformed back into Bronx Bombers after a three-week stretch in which they nearly bombed out of postseason contention.

DJ LeMahieu and Luke Voit and became the first players at the top of New York’s batting order to have five RBIs the same game, and New York rocketed past the Toronto Blue Jays into second place in the AL East with a 20-6 blowout Tuesday night that extended its winning streak to six.

Voit homered twice from the No. 2 slot, raising his major-league-leading total to 18. Voit and Aaron Hicks went deep to key a seven-run second-inning burst made possible when right fielder Derek Fisher misplayed a pair of flyballs.

“A couple of weeks ago, I don’t think teams were scared of us. And now we’re back to being the Bronx Bombers,” Voit said. “I don’t think people want to play us in the playoffs.”

LeMahieu had four hits and five RBIs, raising his average 13 points to .363. He homered on a 48.7 mph offering from infielder Santiago Espinal leading off eighth, the slowest pitch hit for a home run since MLB started tracking velocity of pitches in 2008.

Gary Sanchez hit a three-run homer off Anthony Kay, and Clint Frazier had a two-run shot against Ryan Borucki.

New York has rebounded following a 5-15 stretch that nearly dropped it out of the eight playoff places in the AL and has closed within two games of Minnesota (30-20) for the No. 4 seed — and a first-round series at home. The Yankees (27-21) and Blue Jays (26-21) started a stretch of seven games against each other in the final two weeks.

“Makes for some sleepless nights,” Yankees manager Aaron Boone said. “And now as we get more and more guys back and healthy and in the mix, I know we’re capable of amazing things.”

Giancarlo Stanton and Gio Urshela returned from the injured list, and the Yankees could get Aaron Judge back Wednesday. They opened a roster spot after Tuesday’s game by optioning infielder Thairo Estrada to the alternate site.

Stanton was 0-for-4 with a walk as the designated hitter, the only Yankees starter without a hit, after missing 32 games because of a strained left hamstring.

“A lot of deep counts, obviously smoked the ball,” Boone said. “I thought he looked good and comfortable.”

Urshela had three hits and made several sparking defensive plays at third after missing 11 games with a right elbow bone spur.

Rookie Deivi Garcia allowed three runs and six hits in six innings, in position to be part of the postseason rotation.

New York scored its most runs since a 20-6 win at Atlanta on Aug. 30, 2015. The Yankees batted around in the second, third and fourth innings, the first time they achieved the feat in three consecutive frames since doing it from the fifth through eighth innings in a 22-9 rout of Oakland on Aug. 25, 2011, according to the Elias Sports Bureau.

Ace Gerrit Cole starts for New York, seeking to join Justin Verlander, Roy Osawlt and Mark Mulder as the only pitchers since 2000 to reach 100 career wins in 203 or fewer appearances. 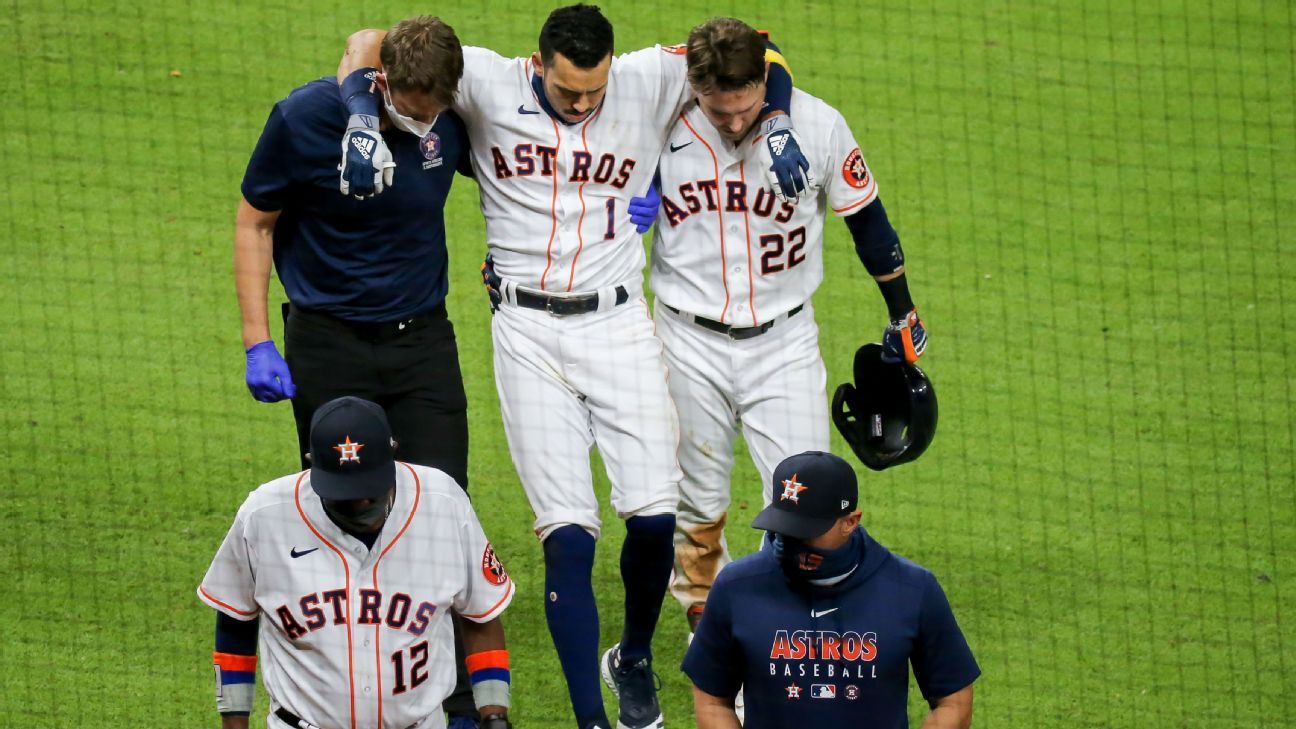 HOUSTON — Astros shortstop Carlos Correa has a bone bruise in his left ankle after fouling a pitch off of it on Tuesday night.

Houston manager Dusty Baker said X-rays were negative and the team should know more about Correa’s status on Wednesday.

Correa was batting with one out in the sixth inning against the Texas Rangers when he fouled the ball. He immediately fell to the ground and was in significant pain as team officials came to check on him.

He was soon helped to his feet and put his arms around two people as he was helped off the field without putting any weight on his left leg.

Jack Mayfield came in to finish the at-bat and struck out.

The Astros beat the Rangers 4-1 to move to two games ahead of Seattle for second place in the AL West, with the top two teams ensured a spot in the postseason. 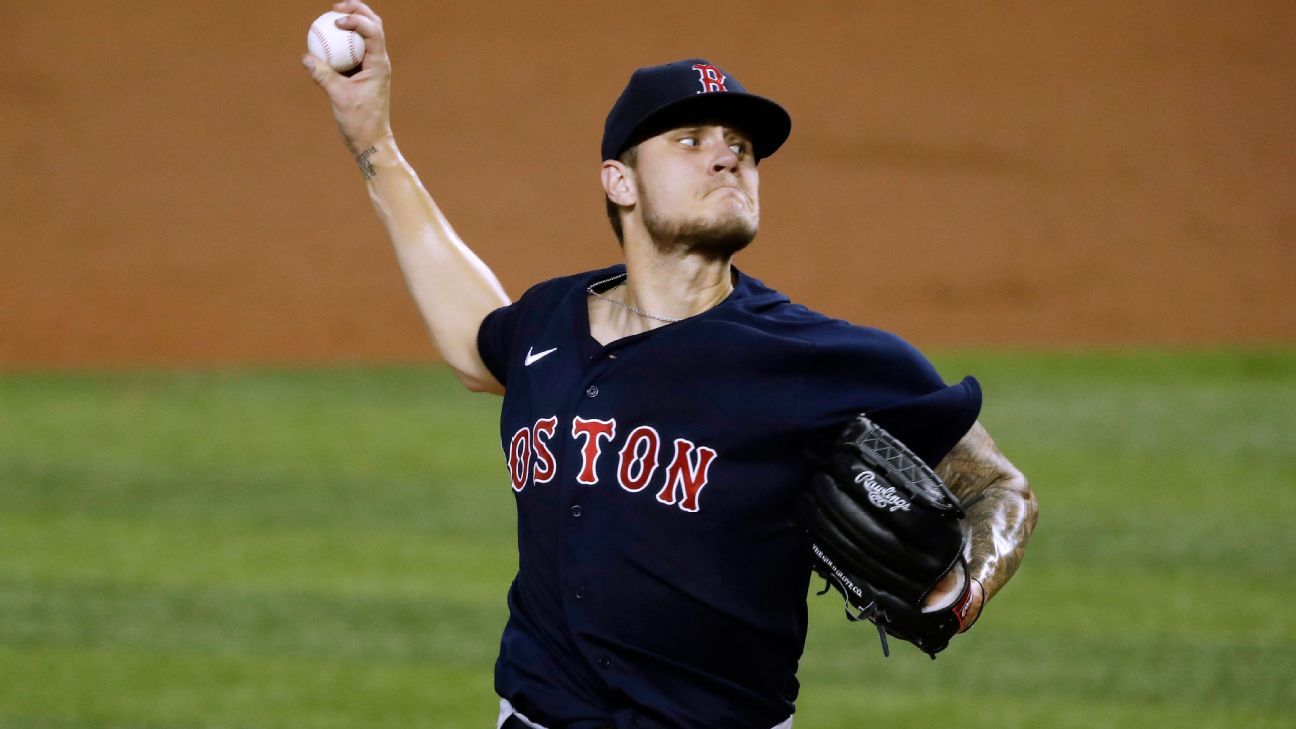 Houck, the first-round draft pick of the Red Sox in 2017, struck out seven and walked three on 86 pitches. The 24-year-old righty became Boston’s 15th starting pitcher this season.

Jackie Bradley Jr. broke up a scoreless game with an opposite-field double off Miami starter Sandy Alcantara in the sixth. Alcantara (2-2) allowed a leadoff single to Xander Bogaerts and walked Christian Vazquez before Bradley delivered against the playoff-contending Marlins.

The Red Sox increased their lead on Vazquez’s run-scoring single in the eighth. Rafael Devers hit a leadoff double, advanced to third on reliever James Hoyt‘s errant pickoff throw and scored on the hit by Vazquez.

Matt Barnes allowed Brian Anderson‘s two-out double before striking out Garrett Cooper for his seventh save.