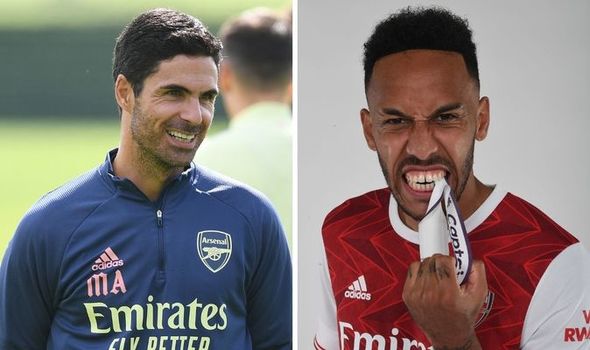 Arsenal have been battling to sign Pierre-Emerick Aubameyang to a new contract for several months.

Bayern Munich’s record streak is over, while Luis Suarez started life at Atletico Madrid with an unbelievable 20-minute stint.

Meanwhile Cristiano Ronaldo scored two for Juventus and Messi got off the mark for Barcelona.

Here’s all the biggest stories from the top European leagues!

European champions Bayern Munich suffered a first defeat for 10 months when their 23-match winning run was ended by a shock 4-1 Bundesliga loss at Hoffenheim on Sunday.

Hoffenheim raced into a 2-0 lead with early goals by defender Ermin Bicakcic and striker Munas Dabbur.

The shock win left Hoffenheim top of the table while defending champions Bayern are in the unusual position of seventh after two matches.

It was the first time Bayern have lost under head coach Hansi Flick in any competition since going down 2-1 to Borussia Moenchengladbach on December 7, 2019.

“Compliments to Hoffenheim, they cut out our space and gave us few chances,” said Flick, who bristled at repeated questions about his team’s tired display.

“We just couldn’t manage to take our chances or play with our usual intensity.”

Bayern looked tired, showing the effects of being taken to extra time in the UEFA Super Cup on Thursday before beating Sevilla 2-1 in Budapest.

The loss brings to an end Bayern’s run of 23 consecutive wins, a record for a club in one of Europe’s five main leagues, surpassing Real Madrid’s 22 straight between September and December 2014.

Cristiano Ronaldo was at his influential best, scoring a pair of equalisers to twice peg back Roma in a 2-2 draw.

Ronaldo netted from the spot before rising highest – and hanging in the air for what seemed an eternity – to head home his second in spectacular fashion and pick up a point for the defending Italian champions.

Roma’s central midfielder Jordan Veretout scored both of his side’s strikes, netting from the spot after Adrien Rabiot handballed.

Rabiot was sent off for a second offence in the second half, but Ronaldo wasn’t to be denied a sensational second as the 35-year-old soared into the sky with a header from Danilo’s cross.

Messi off the mark

Lionel Messi scored a penalty in his first game since trying to leave Barcelona as Ronald Koeman began his tenure as coach by overseeing a 4-0 La Liga demolition of Villarreal on Sunday.

Messi converted from the spot and it was the Argentinian’s cross that then forced Pau Torres into an own-goal, after an early double from the 17-year-old Ansu Fati had already put Barca in charge.

Fati became Spain’s youngest ever scorer earlier this month and the teenager, deployed on the left of the attacking trio, has now made an explosive start to the season for his club.

He fired Jordi Alba’s pull-back into the top corner and then drove a second inside the post after Philippe Coutinho was allowed to carry the ball forward and spread it wide.

Fati then won the penalty, his feet too quick for Mario Gaspar, and Messi slid in his first goal of the season before his cross, aimed for Sergio Busquets, was poked into Villarreal’s net by Pau.

Messi’s recent anger over Luis Suarez’s departure shows he is still at odds with Barcelona’s president Josep Maria Bartomeu and his long-term future remains uncertain, but on the pitch, for now at least, he seems ready to deliver.

Luis Suarez bagged two goals and an assists off the bench for Atletico in a stunning reminder that he is still one of the best strikers in Europe despite being dumped by Barcelona.

He set up a goal two minutes after coming on as a substitute, his sumptuous pass finished off by Marcos Llorente, before scoring himself with a powerful header at the back post.

The 33-year-old then added another in injury time, following up his own shot to make it six for a rampant Atletico at the Wanda Metropolitano.

“Sometimes it is important to have a change as a player,” said Suarez. “I’ve come to a club that has given me a spectacular welcome, it shows in the atmosphere, you get a good impression from the beginning, and you can see that on the pitch.”

Diego Costa said with a smile: “It’s great. One of us bites, the other one hits.”

Costa had earlier given Atletico the lead but it was the 31-year-old who made way for Suarez, and he raised doubts about his future after the match.

“I leave my future up to the club. I spoke with the club, with the coach, I made it very clear what was happening, that if I am here, I will fight,” said Costa.

“If they see the possibility of me leaving, I’ll accept it. I don’t want to be a weight.”

Newcastle had just one shot on target in their 1-1 draw with Spurs – the extremely controversial last-minute penalty scored by Callum Wilson after a ball clipped Eric Dier’s arm.

The 95th-minute VAR intervention saw Spurs boss Jose Mourinho storm down the tunnel furiously, keeper Hugo Lloris scream ‘f**k off’ after seeing the ball fly into his net, while his goalkeeping coach Nuno Santos was sent off for protesting at the referee following the final whistle.

The call sparked outrage, and even Newcastle manager Steve Bruce said the new handball rule is ruining football, despite the result.

Mourinho refused to comment on the decision after the match – saying he didn’t want to be fined by the Football Association.

Newcastle boss Bruce admitted to Sky Sports: “I can understand why Spurs will go berserk and Roy Hodgson reacted like he did.

“It is a total nonsense, we should be jumping through hoops but I would be devastated if that was us.

“The decisions are ruining the spectacle. We have to get together as managers and say this must stop.

“Newcastle fans will be ecstatic, I can understand that. But everyone else in this country will say exactly what I am saying and what I am thinking.

“Eric Dier jumps for the ball, has no control of where his arms are going, there is a header half a yard away from him, hits him on the back of the arm, has no idea what is going on.”

Carragher begged football’s hierarchy to change the laws. He said: “This is a joke. Whether it’s the Premier League, the FA, Fifa, [Pierluigi] Collina, whoever’s involved in this – stop it, because you are ruining football for everybody.

Jamie Vardy’s hat-trick dealt an early blow to Manchester City’s hopes of wrestling back the Premier League title as they conceded three penalties in a 5-2 defeat to Leicester, while Newcastle’s late spot-kick to snatch a 1-1 draw at Tottenham sparked fresh debate over the handball rule.

City were without a host of first-team regulars due to injury and coronavirus infections, but the deficiencies at the back that undid their title defence last season were again exposed by the pace and finishing prowess of Vardy as a Pep Guardiola team conceded five for the first time in his coaching career.

Leicester stormed to the top of the league, but had to come from behind to extend their perfect start to the season as Riyad Mahrez’s stunning strike against his former club opened the scoring after just four minutes.

City are reportedly close to signing Benfica centre-back Ruben Dias and the need for defensive cover was obvious as Vardy tore apart the experimental pairing of Eric Garcia and Nathan Ake.

It was the more experienced Kyle Walker who was at fault to start Leicester’s revival as he brought down Vardy, who slammed home the resulting penalty.

Vardy this time slotted low past Ederson and James Maddison killed off a jaded City with a sumptuous curling effort into the top corner.

Ake pulled a goal back six minutes from time from Mahrez’s corner, but after Vardy had made way, another idiotic City challenge, this time form Benjamin Mendy, allowed Youri Tielemans to score Leicester’s third penalty.

Tottenham find themselves already five points behind the Foxes and Everton at the top of the table after letting two points slip away from a dominant display against Newcastle.

Lucas Moura’s predatory finish on 25 minutes was all Spurs had to show from a first-half littered with chances as Karl Darlow made three fine saves from Harry Kane and Son Heung-min hit the woodwork twice.

Newcastle had not even registered a shot on target until they were awarded a penalty five minutes into added time when Andy Carroll’s header brushed the arm of Eric Dier and referee Peter Bankes pointed to the spot after reviewing the incident on the pitchside monitor.

Hugo Lloris got a hand to Callum Wilson’s penalty but could not keep it out with even the Magpies boss Steve Bruce embarrassed to have escaped with a point.

“It is a total nonsense,” said Bruce of the penalty award. “We should be jumping through hoops, but I would be devastated if that was us.”

Leeds’ fine start on their return to the Premier League after a 16-year absence continued as Patrick Bamford scored a dramatic late winner to win a Yorkshire derby against Sheffield United 1-0.

After pushing Liverpool all the way in a 4-3 defeat on the opening weekend of the season, Marcelo Bielsa’s men have won their next two with the much-maligned Bamford scoring in all three games so far.

The Blades remain without a point or a goal this season after impressing to finish ninth on their return to the top-flight last season.

Texans fall to 0-3, and their troubles aren’t going away – Houston Texans Blog