Former Barcelona mentor Ernesto Valverde is hoping his next coaching job will be in the A-League rather than English Premier League.

Barely a month since he was sacked by the European powerhouse, Valverde is contemplating his next move and Australia is high on the list.

“People ask me sometimes ‘How about the Premier League?’ and I say ‘Well actually I’d like to go to Australia’,” the 56-year-old Valverde said at the Bilbao International Football Summit on Thursday. “A career in football does not last forever and sometimes you think you have to take the opportunity to live in strange places.”

Valverde, who won two La Liga titles with Barca, is enjoying a rare break in a career which has lasted 18 years and taken him to some of Spain’s top clubs such as Valencia and Athletic Bilbao as well as two stints at Greek giants Olympiakos.

Making his first media appearance since being sacked by the Catalans in January and replaced by Quique Setien, Valverde expressed his admiration for former player Andres Iniesta’s decision to move to Japanese side Vissel Kobe when he left Barca in 2018.

“I applauded Andres when he told me he’s going to Japan. I thought ‘Wow, he gets to understand a different culture and different people’, and I am also very interested in Japan,” added Valverde, who outside of football is a keen photographer. GUARDIOLA FEARS HE COULD BE SACKED OVER CHAMPIONS LEAGUE FAILURE

ONE YEAR ON, BLUES HAVE THEIR HAZARD REPLACEMENT. HERE’S WHY THEY SPLASHED $64M ON HIM

“You can take great photos in Japan. There are many places I’d like to go. We’ll see what I end up doing, I haven’t been out of work for very long so I don’t have to decide anything yet, I haven’t got a very clear idea at the moment.

“It’s possible I’d go somewhere abroad. The truth is I like to do strange things so I wouldn’t rule it out.”

Jean-Paul de Marigny was appointed in a caretaker capacity last month and will lead the team against Newcastle on Saturday when he will be chasing his second straight win.

With global football – with the exception of the Belarusian league – on hold indefinitely, there is plenty of time for agents to sound out the interest in their clients to new teams.

And with clubs financially struggling, it is set to be a buyers’ market when transfers are officially allowed again, with smaller clubs desperate to bring in money to supplement months of empty stadiums and loss of TV revenue.

Here’s all the latest gossip, in today’s Rumour Mill… Wolves striker Raul Jimenez has opened up his signature to the highest bidder after revealing he has no release clause in his contract.

The Mexico star has been one of the stand-out forwards in the Premier League since joining Wolves and has now attracted the likes of Real Madrid and Manchester United’s gaze.

He told Spanish outlet MARCA: “They (Wolves) bought me for €40m, they won’t sell me for less. There is no release clause, but the clubs [in England], it is different how they are managed.

“I see a lot of people talking and saying that ‘he’s [ready] for a top-six team’. Right now we are in fifth place and we are not behind anything of those teams. I mean, apart from Liverpool who are way above this season, I think we are fighting as equals with everyone else.”

‘I MISSED THAT, WAS THERE A RED CARD?’: REMEMBERING FOOTBALL’S MOST AWKWARD LIVE CROSS

Aston Villa captain Jack Grealish has been told he has ‘no chance’ of joining Manchester United at the end of the season, despite claims suggesting he was in line for a big-money move.

That’s according to a player who played for both teams, Paul McGrath, after the Englishman’s recent boozy outing whilst supposedly in lockdown.

“He is linked with a massive club in Manchester United, so you think to yourself that you have to act accordingly.

“It doesn’t matter if you are 24, you have to act accordingly and I hope that this isn’t something that is going to cause him a lot of problems. I really do hope that.”

FROM MADRID TO… MERSEYSIDE?

Everton boss Carlo Ancelotti is rumoured to be attempting to line up a reunion with his former Real Madrid charge James Rodriguez.

The Colombian playmaker has little over a year left on his contract and is surplus to requirements at Real with Everton topping the list of interested clubs, according to Spanish outlet MARCA.

It is not the first time Ancelotti has attempted to take James with him, saying while managing Napoli last July: “I’m very attached to James, I rate him very highly and he can certainly improve our team.”

Finishing the Premier League in China has been mooted by one club as top-flight chiefs hold a crunch video conference on saving the season.

Prem teams could lose £762million ($1.5 billion) from broadcasters if play fails to resume after it was suspended due to the coronavirus pandemic.

And the more worried clubs become, the more outlandish some ideas are becoming, including completing the season in the country where Covid-19 began but seems to be recovering first.

Settle in with the best entertainment for the whole family. No installation. No lock-in contract. Start your Foxtel Now 10-day free trial. New customers only.

One chief executive toldThe Athletic: “The country that keeps getting proposed is China.

“It just doesn’t make any sense. It is a crazy idea and I think it will get firmly rejected.

“If we were to pick up the Premier League and move it to another part of world right now we’d get absolutely slaughtered.” Uefa has cleared space to give leagues time to finish their campaigns.

All international games have been put on hold until at least September, with remaining Champions League and Europa League ties also delayed.

But with most Prem clubs anxious to play every league fixture – even if it means resuming as late as July – a new pressure has emerged.

The government has joined fans and pundits in slating Prem stars for keeping their full wage pockets while hundreds of non-playing staff are furloughed.

Tottenham, Newcastle, Bournemouth and Norwich have all taken advantage of the scheme, which was designed to help cash-strapped businesses retain employees. And health minister Matt Hancock is urging Prem players to “take a pay cut and play their part”.

He added: “Given the sacrifices many people are making, the first thing PL footballers can do is make a contribution.”

Redknapp himself said: “I can’t believe it. Surely players should be taking a cut. This isn’t for big clubs like Tottenham.

“But you are talking here about a club where their players earn £10-12million a year.”

The Professional Footballers’ Association (PFA) has now agreed “players will have to share the financial burden”.

They said in a statement: “We are aware of the public sentiment that the players should pay non-playing staff’s salaries.

“However, our current position is that – as businesses – if clubs can afford to pay their players and staff, they should.

“The players we have spoken to recognise that the non-playing staff are a vital part of their club and they do not want to see club staff furloughed unfairly.”

This article first appeared in The Sun . 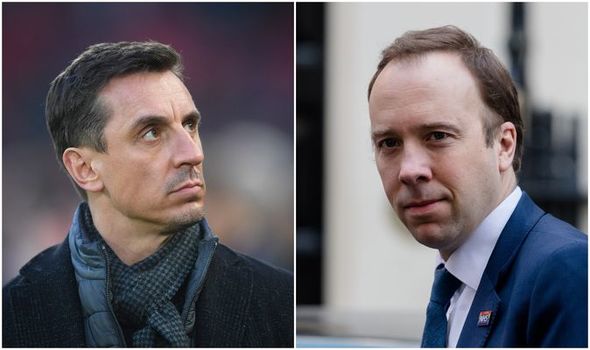 Gary Neville has taken to Twitter to hit back at Matt Hancock after the Secretary of State for Health and Social Care called on Premier League players to take a pay cut amid the coronavirus crisis.