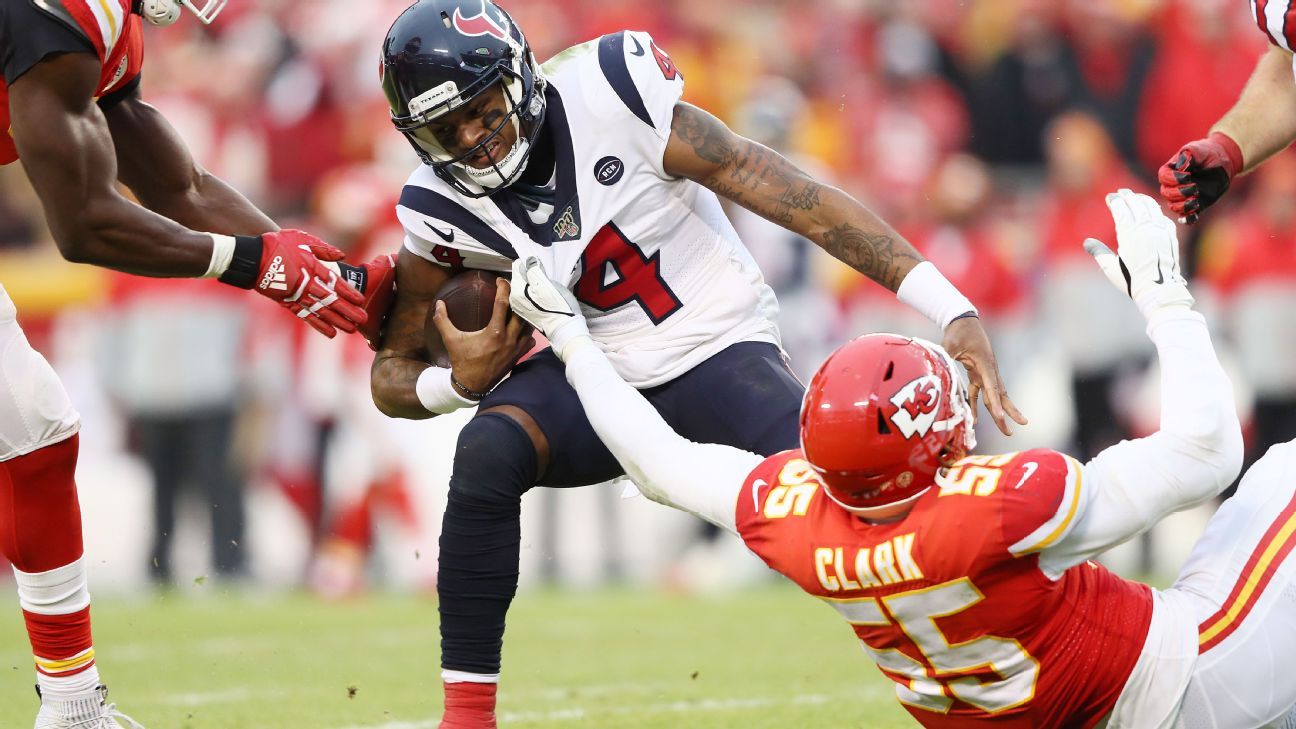 KANSAS CITY, Mo. — Frank Clark set a Kansas City Chiefs playoff record with three sacks in his team’s 51-31 divisional round victory over the Houston Texans on Sunday at Arrowhead Stadium.

That’s a long way from growing up spending time in homeless shelters with his mom as a kid.

“It comes from coming from the bottom,” Clark said. “Where I come from, there’s not a lot of opportunities to do things like this, to go out here and have fun with my teammates and play football in front of these great fans.

Clark didn’t just have quantity when it came to sacks on Sunday, he also had quality.

He sacked Deshaun Watson for a 17-yard loss on Houston’s final play. He also had a sack in the third quarter on which Clark simply wouldn’t quit. On that play, he took a couple of passes at Watson but failed to get him and even fell to the ground at one point. But he got up and finally made the tackle because, as Clark himself said, he had no choice.

The Chiefs needed a big game from Clark since they played without Chris Jones, their leader in sacks in each of the past two seasons. Jones missed the game with a sore calf. The Texans had beaten the Chiefs in October without Jones — one of two games this season in which the Chiefs failed to register a sack. This time, led by Clark’s effort, the Chiefs had five sacks.

Clark wasn’t at his best in the Week 6 game against the Texans because of a pinched nerve in his neck that was bothering him. He took that loss, and a big game from Texans running back Carlos Hyde, personally. He jawed with Hyde throughout the rematch Sunday and seemed to take pride in leading the defensive effort in the game that ended the Texans’ season.

“The last time they were here they beat us, just smacked us in the face,” Clark said. “That’s the one thing I remember. At the end of the day, they’re talking to the wrong guy, talking to the wrong team. They come in here talking all that stuff and they come out here and we embarrass them. We sent them home early. … I hope they enjoy their offseason.”

The Chiefs fell behind 24-0 in the second quarter and looked like a team that might soon be finished for the season. Clark insisted he wasn’t worried.

“It’s the playoffs,” he said. “It’s what you expect. Every team is going to give you their all. Houston, they came out with the first 15 [plays]. Everything is scripted. They had a [great] push.

“Thank god we’ve got Pat Mahomes. We’ve got an MVP quarterback back there so there’s not too much pressure on you.”

The Chiefs will face the Tennessee Titans in next Sunday’s AFC Championship Game, also at Arrowhead Stadium. The Titans beat the Chiefs in Week 10 in Nashville, Tennessee.

Clark didn’t seem to have the same animosity for the Titans as he did for the Texans. But he did remember the first game’s result. 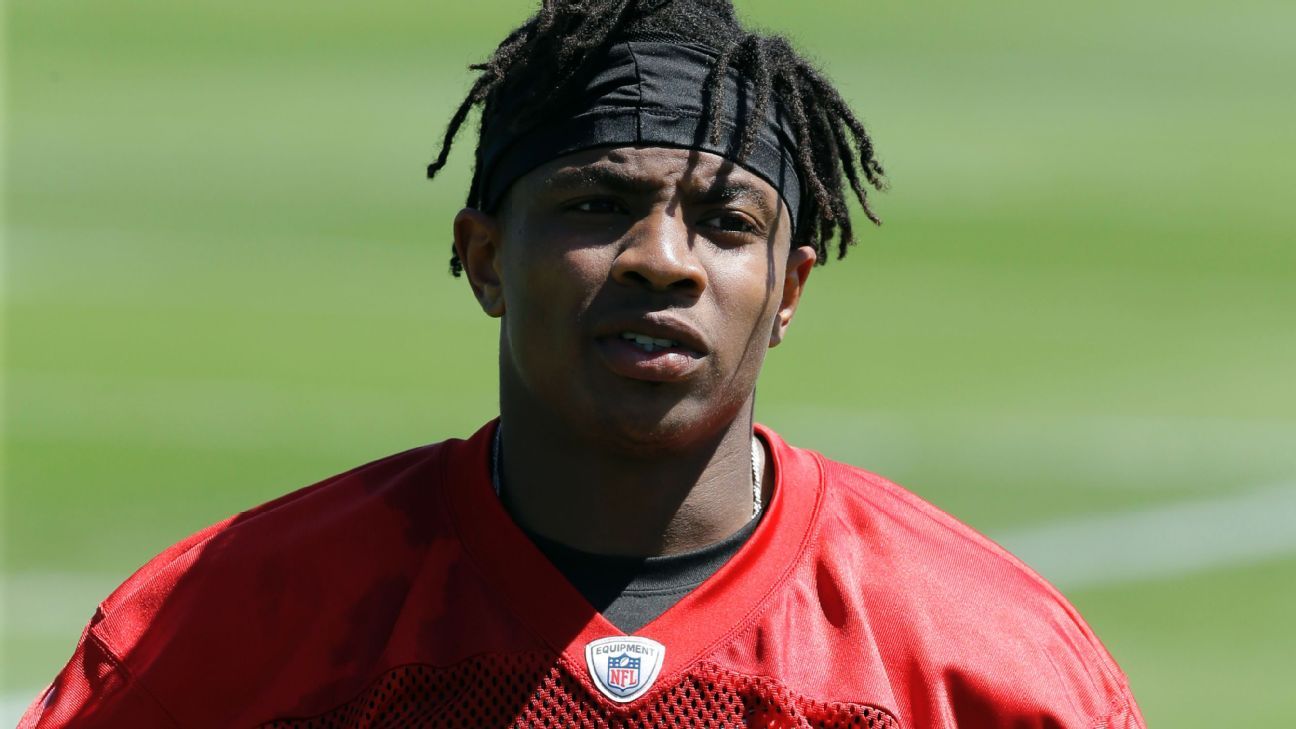 Hargreaves III signed with the Texans in November after he was cut by the Tampa Bay Buccaneers after he was benched in a game. After that game, Buccaneers head coach Bruce Arians said Hargreaves “didn’t look like he was hustling to go in for a tackle.”

Hargreaves III could have stayed in Houston under his fifth-year option worth $9.6 million, but there was no dead money on the contract because the option is guaranteed for injury only before the start of the new league year in March.

In his end of season press conference, Texans head coach Bill O’Brien said he thought Hargreaves “made the best of” his opportunity to join Houston during the season.

“I don’t think that’s easy to be able to come in, in the middle of a season, and really later than that, and play that nickel position is not easy,” O’Brien said. “So, I give a lot of credit to Vernon. There’s a lot of things that he’s going to work hard to improve upon. We’re going to help them with that, but I think Vernon stepped into a tough situation and really made the best of it.”

Hargreaves III, 24, was drafted by Tampa Bay with the No. 11 pick in 2016. In 41 career games, Hargreaves III has two interceptions, two forced fumbles, a fumble recovery and 186 tackles. 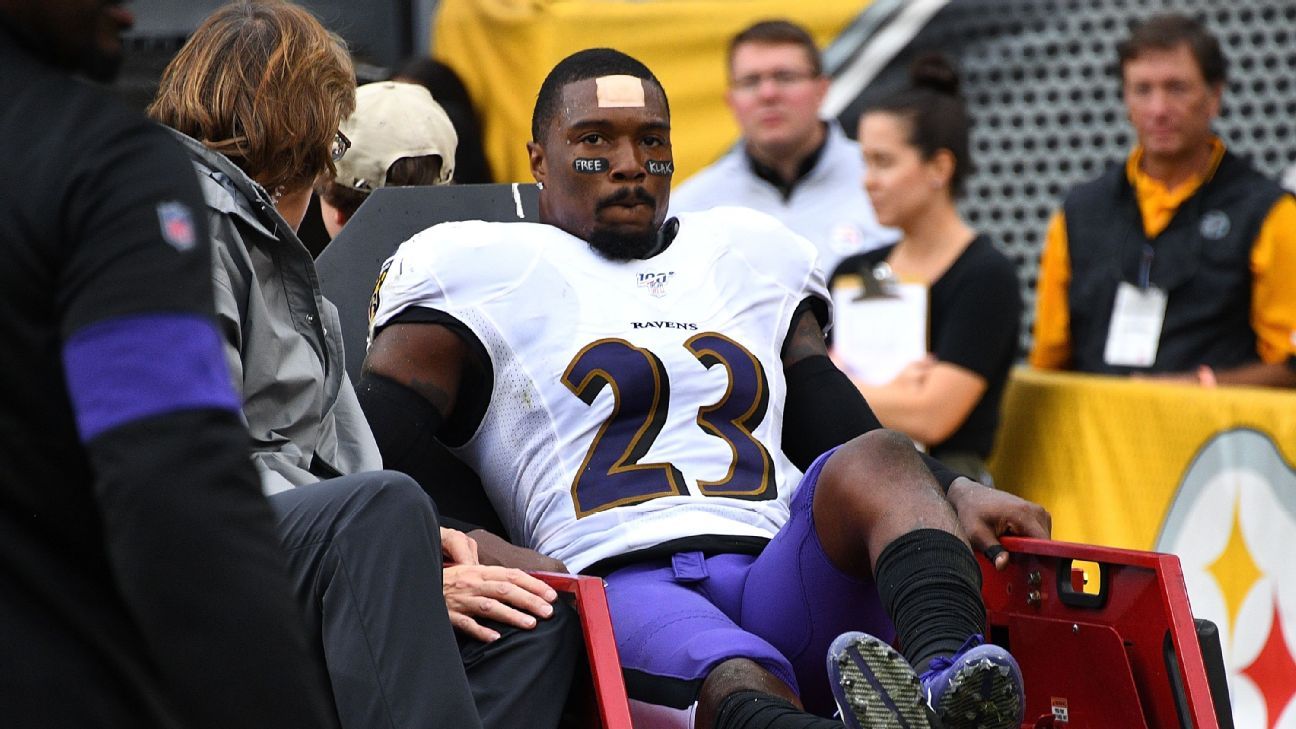 The Baltimore Ravens cut ties with veteran safety Tony Jefferson on Friday, releasing him after his 2019 season was cut short by a torn ACL.

The Ravens saved $7 million in cap space with the move.

Jefferson, 28, received $19 million guaranteed on a four-year deal with the Ravens in 2017, but he never lived up to being a prized free-agent acquisition. He failed to consistently make impact plays, totaling 2 interceptions, 2 forced fumbles and 11 passes defensed in 35 games.

Jefferson’s departure was sealed last season. After he tore the ACL in his left knee in Week 5, the Ravens defense played better when Chuck Clark, a 2017 sixth-round pick, replaced him.

Even though he disappointed on the field, Jefferson was one of the most respected players on the team because of his work ethic and football IQ.

After going undrafted in 2013, Jefferson spent his first four seasons with the Arizona Cardinals. In seven seasons, Jefferson has recorded 450 tackles, 4 interceptions and 22 passes defensed.

Also Friday, the NFL suspended Ravens offensive lineman James Hurst for the first four games of the 2020 season for violating its policy on performance-enhancing drugs. Hurst is eligible to participate in all preseason practices and games. He will be allowed to return to his team’s active roster on the Monday following the team’s fourth game.

Signed as a rookie free agent in 2014, Hurst played in all 16 regular-season games for the Ravens last season, with two starts at left tackle. He was part of an offensive line that paved the way for an NFL-record 3,296 yards rushing in 2019.

Hurst, 28, signed a four-year contract in March 2018. He didn’t miss a game over his first four seasons before being inactive for six games in 2018 with a back injury. 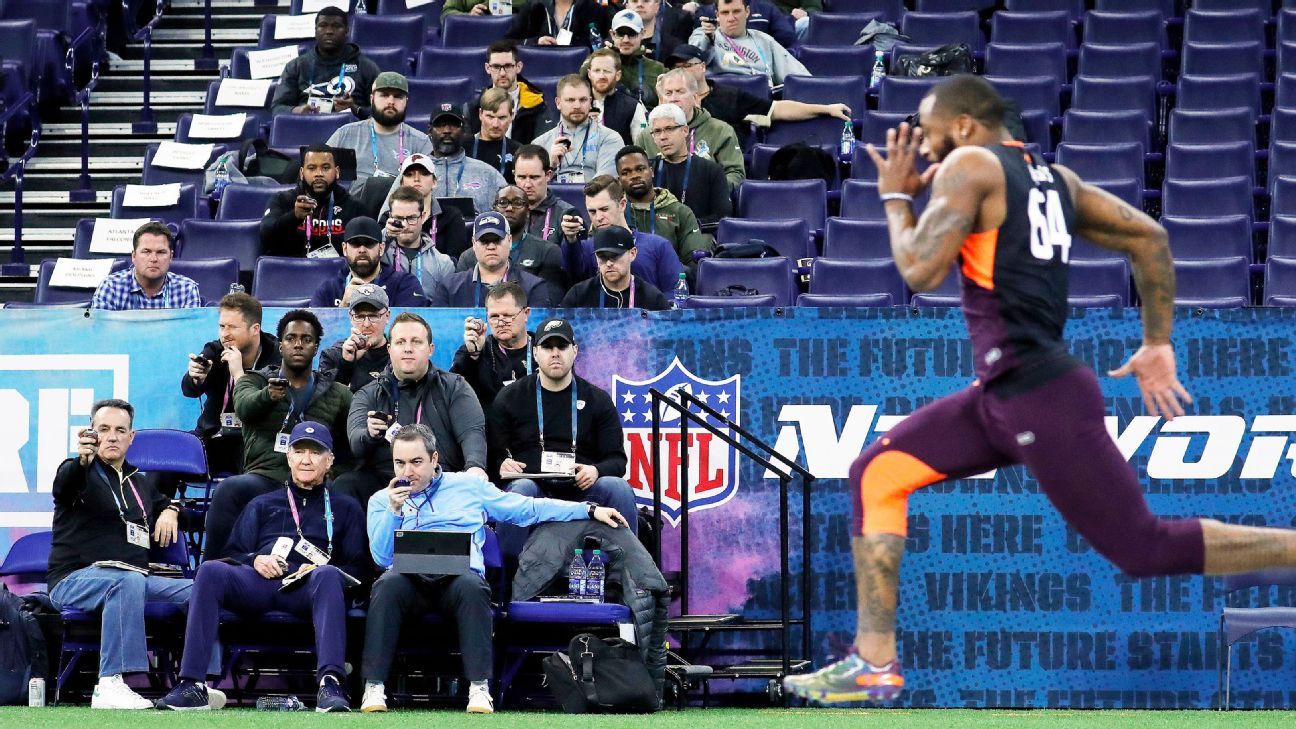 In what could portend as a wave of the future, the Broncos are not sending their assistant coaches to the scouting combine in Indianapolis this year because they believe there’s a better use of their time watching film back in Denver, league sources told ESPN on Friday.

In a copycat league, the Broncos and Rams could be establishing a trend that other teams will follow, leaving coaches behind to watch the combine on TV and do their own scouting work in the office.

It is what Broncos head coach Vic Fangio, who will attend this year’s combine in person, decided for this combine, sources told ESPN. He thought there was better use of the assistant coaches’ time to study prospects on tape rather than in person.

In addition to studying the prospects on tape, the Broncos’ assistant coaches also will have access to the combine private interviews led by the personnel staff and Fangio in Indianapolis.

Rams head coach Sean McVay will attend the opening days of the combine, fulfilling his obligation to speak with the media, before returning to Los Angeles to continue implementing his systems with his two new coordinators, sources told ESPN. The rest of the Rams’ coaching staff will attend the combine.

Both organizations believed there was better use of their time than to attend the combine en masse, sources told ESPN. Though it did not drive either team’s decision, there also is a hefty financial savings for each organization by not having everyone travel to Indianapolis.