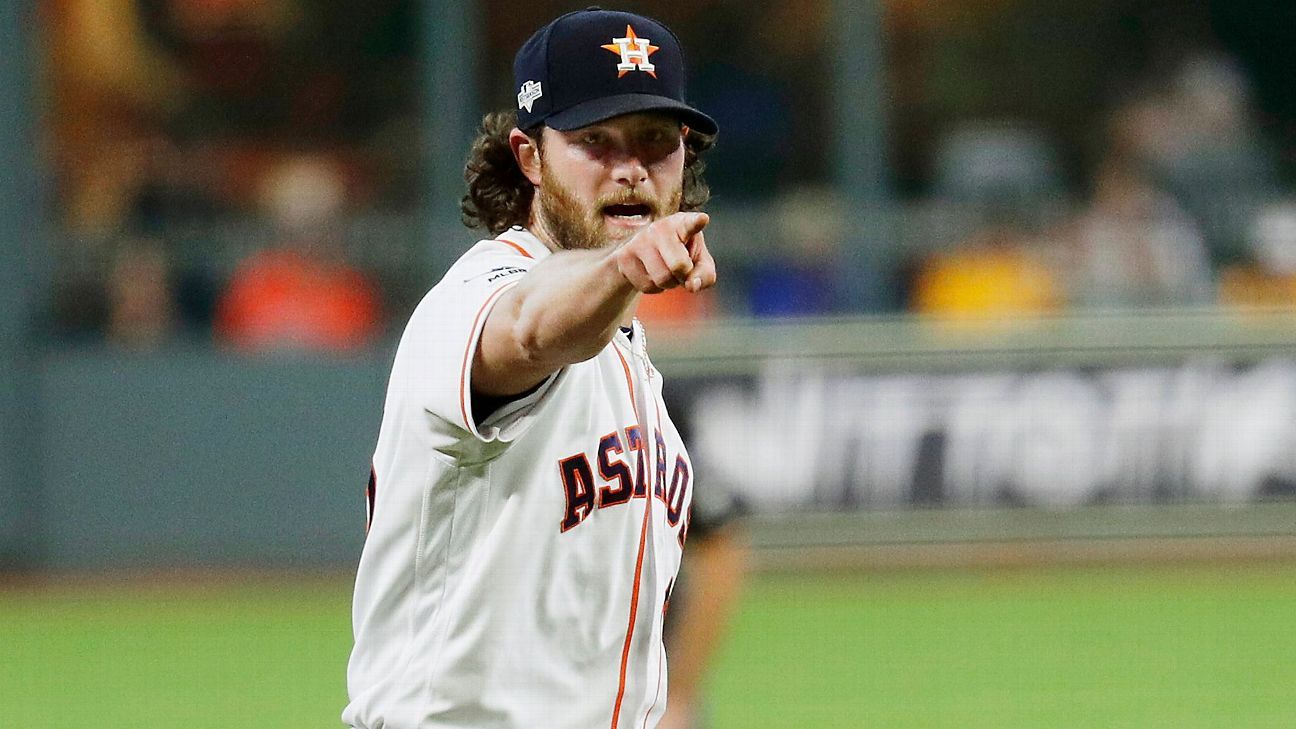 The New York Yankees have made signing right-hander Gerrit Cole their clear offseason priority and have ownership-level approval to offer him a record-setting deal, sources familiar with their plans told ESPN.

The Yankees’ fondness for the 29-year-old Cole, whose fantastic 2019 season with the Houston Astros set him up to smash David Price’s record contract for a pitcher of $217 million, was only reinforced during a meeting with him earlier this week, sources said.

New York and the Los Angeles Angels, a team similarly smitten with Cole and in even greater need of pitching than the Yankees, are preparing for a bidding war that executives expect will reach well beyond $250 million, according to sources. The Los Angeles Dodgers‘ interest in Cole is acute as well, though they are also considering bids for right-hander Stephen Strasburg and third baseman Anthony Rendon, sources said.

While the expectation going into the offseason was that negotiations with Cole could stretch into January, the clear willingness of teams to engage in high-year, high-dollar deals could ratchet up the timetable, according to sources. Cole’s agent, Scott Boras, has yet to solicit offers, but the teams’ recognition of Cole’s value and understanding of multiple motivated buyers could have an expeditious effect, sources said.

The Yankees’ willingness to play in that financial range signals a shift from recent years, in which they have avoided big-money free agent signings. Their last nine-figure commitment to a free agent was pitcher Masahiro Tanaka, on whom they spent $175 million in January 2014 — he is entering the final year of his deal. In December 2017, New York traded for outfielder Giancarlo Stanton and assumed $265 million of the $295 million left on his contract.

The commitment from owner Hal Steinbrenner to strongly pursue Cole has emboldened the Yankees, who sent GM Brian Cashman, manager Aaron Boone, pitching coach Matt Blake and longtime Yankees star Andy Pettitte to their meeting in California. The attention paid by New York to embracing modern pitching analysis could appeal to Cole, whose thirst for knowledge and intelligence are among the qualities teams appreciate about him the most, according to sources.

New York finds itself well-positioned to absorb the $35 million-or-so a year Cole is expected to command. Among Tanaka, J.A. Happ and James Paxton, they could clear more than $50 million in salaries before the 2021 season. Though a number of their young stars will see escalating salaries through the arbitration process — outfielder Aaron Judge and catcher Gary Sanchez will be second-time eligible, and infielder Gleyber Torres will be in his first year beyond a near-minimum salary — the Yankees recognize the value of an ace-caliber pitcher such as Cole.

Their familiarity with him dates back more than a decade. In 2008, New York chose Cole with the 28th overall pick in the draft and planned to offer him a record bonus to sign. Cole spurned the Yankees for UCLA and three years later went No. 1 overall to the Pittsburgh Pirates.

It wasn’t until a January 2018 trade that Cole unlocked the stuff that has him in the conversation for the best pitcher in baseball. In his first season after being dealt to the Astros, he went 15-5 with a 2.88 ERA. This year, he was even better: 20-5 with a league-leading 2.50 ERA and a major league-best 326 strikeouts in 212 1/3 innings. He finished second in American League Cy Young voting to teammate Justin Verlander.

Though the Yankees have prioritized signing Cole, they have not ruled out pursuing Strasburg, the reigning World Series MVP who is also being pursued by the Washington Nationals and Dodgers. Strasburg opted out of the four years and $100 million left on his contract with the Nationals and is expected to receive a deal of at least $180 million.

It was the one trade everyone has predicted all offseason and it finally happened on Monday: The Pittsburgh Pirates traded outfielder Starling Marte to the Arizona Diamondbacks for two prospects. The Diamondbacks needed an outfielder, and with the Pirates stuck in the mire of Nowhere Land it was for them to trade a 31-year-old outfielder while he still had two years of team contractual control remaining.

What are the Diamondbacks getting? Other than a subpar 2017, when Marte was suspended 80 games for a positive PED test, he has been a consistent performer at the plate, with an OPS+ ranging between 113 and 120 every other season since 2015. He did set career highs in 2019 in home runs (23) and slugging percentage (.503) thanks to the lively baseball.

Marte is a two-time Gold Glover, with those awards coming in 2015 and 2016 when he primarily played left field. He played center field the past two seasons and he posted the worst defensive metrics of his career in 2019 with minus-9 defensive runs saved. The Statcast numbers, however, are a little more kind to his glove work, crediting him with two outs above average and a high jump rating. Given his speed remains near-elite, Marte reasonably projects as at least an average defender in center field, sandwiched between David Peralta and Kole Calhoun. 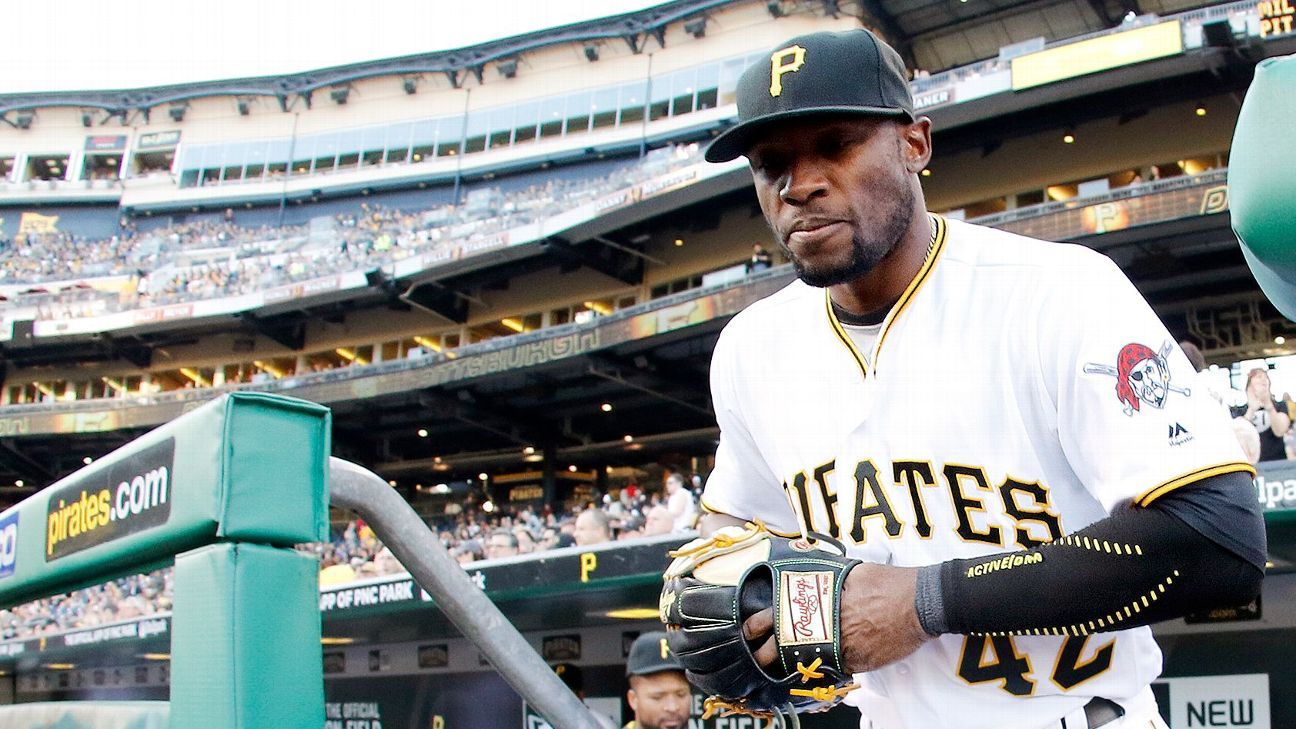 Outfielder Starling Marte was traded from the Pittsburgh Pirates to the Arizona Diamondbacks on Monday for two prospects and $250,000 in international signing bonus pool money.

He reached the All-Star game in 2016 but also served an 80-game suspension in 2017 after testing positive for steroids.

The Pirates are in the midst of a rebuild after revamping their leadership structure following a last-place finish in the NL Central in 2019. The ascension of outfielder Bryan Reynolds during a breakout rookie season in 2019 and Gregory Polanco’s expected recovery from shoulder issues that limited him to 42 games last season gave Pittsburgh all the flexibility it needed to move Marte

The players going to Pittsburgh are right-handed pitcher Brennan Malone, the 33rd pick in the 2019 draft and shortstop Liover Peguero, a toolsy 19-year-old from the Dominican Republic who excelled in short-season ball.

“We’re excited about adding two young players of this caliber and the opportunity we’ll have to help them continue to grow.” Pirates general manager Ben Cherington said in a prepared statement. “In addition, we now have a greater ability to acquire impact-type talent in this year’s international free agent market.”

Malone, a hard-throwing right-hander, was considered one of the top prospects in the Arizona system. He went a combined 1-2 with a 4.50 ERA in seven appearances in Class A. Peguero hit a combined .326 (74 for 227) with 11 doubles, five triples, five home runs and 38 RBIs in 60 games in the low minors last season.

Arizona was dealing from a farm system that is one of the deepest and best in baseball, along with San Diego’s and Tampa Bay’s.

ESPN’s Jeff Passan and The Associated Press contributed to this report.

Outfielder Starling Marte has been traded from the Pittsburgh Pirates to the Arizona Diamondbacks, sources told ESPN’s Jeff Passan Monday.

It was not immediately clear what compensation was headed to the Pirates.