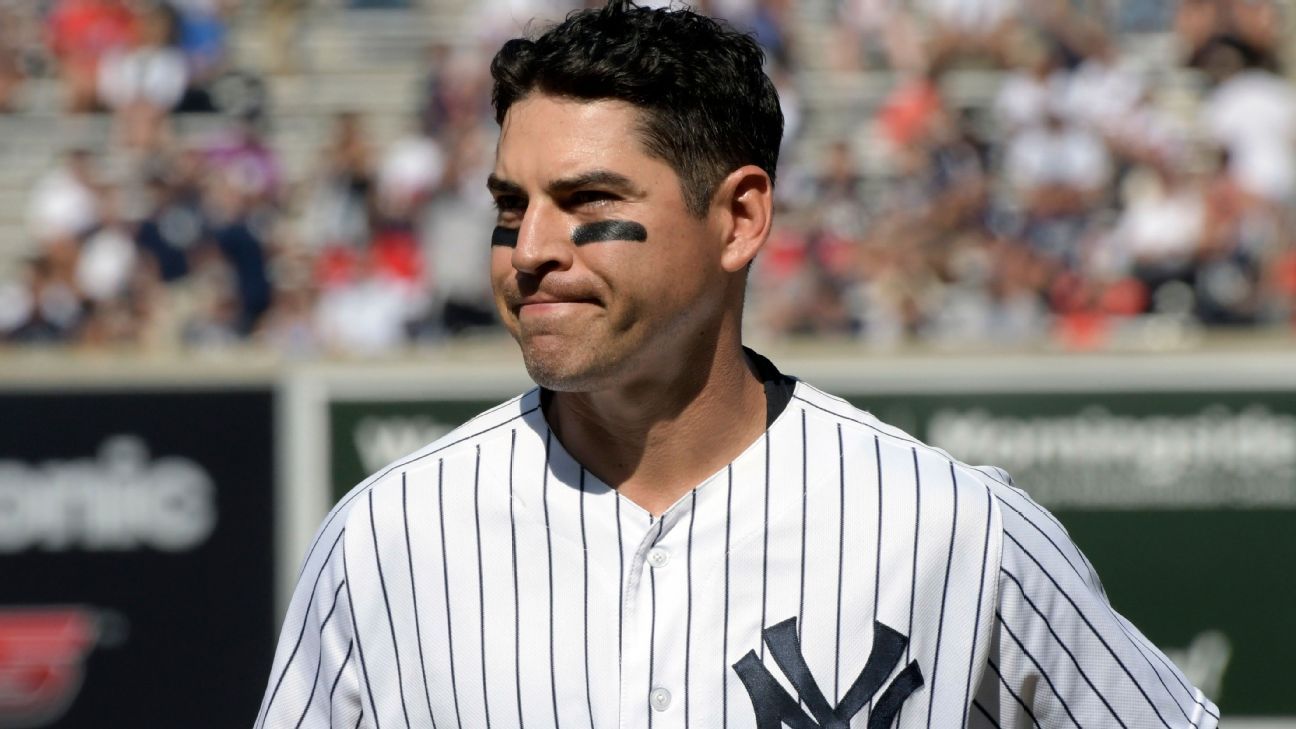 The New York Yankees intend to not pay Jacoby Ellsbury the remaining $26 million due under his contract, contending he violated the deal by receiving unauthorized medical treatment, sources confirmed to ESPN’s Buster Olney on Friday.

According to multiple reports, Yankees general manager Brian Cashman sent a letter to Ellsbury and his agent, Scott Boras, informing them the team had converted his contract to a nonguaranteed deal.

The Yankees said Ellsbury, who has not played since 2017 due to myriad injuries, was treated by Dr. Viktor Bouquette of Progressive Medical Center in Atlanta without the team’s permission, according to multiple reports.

The New York Post first reported that the Yankees didn’t intend to pay Ellsbury, who had two years remaining on his $153 million, seven-year contract when he was released Wednesday.

Ellsbury and The MLB Players’ Association can file a grievance challenging the conversion of the contract to nonguaranteed.

He was released Wednesday to clear a 40-man roster spot as the Yankees added seven players to protect them from next month’s Rule 5 draft.

Ellsbury injured an oblique muscle in his right side early during spring training in 2018, developed a bad back and had hip surgery Aug. 6 to repair a torn labrum in his left hip. He experienced plantar fasciitis in his right foot during his rehab program before spring training this year.

Where does Jacoby Ellsbury rank among MLB’s worst big-money free-agent signings ever?

Willing to ‘leave the window open,’ an optimistic Shohei Ohtani hopes to pitch again for Angels despite arm troubles 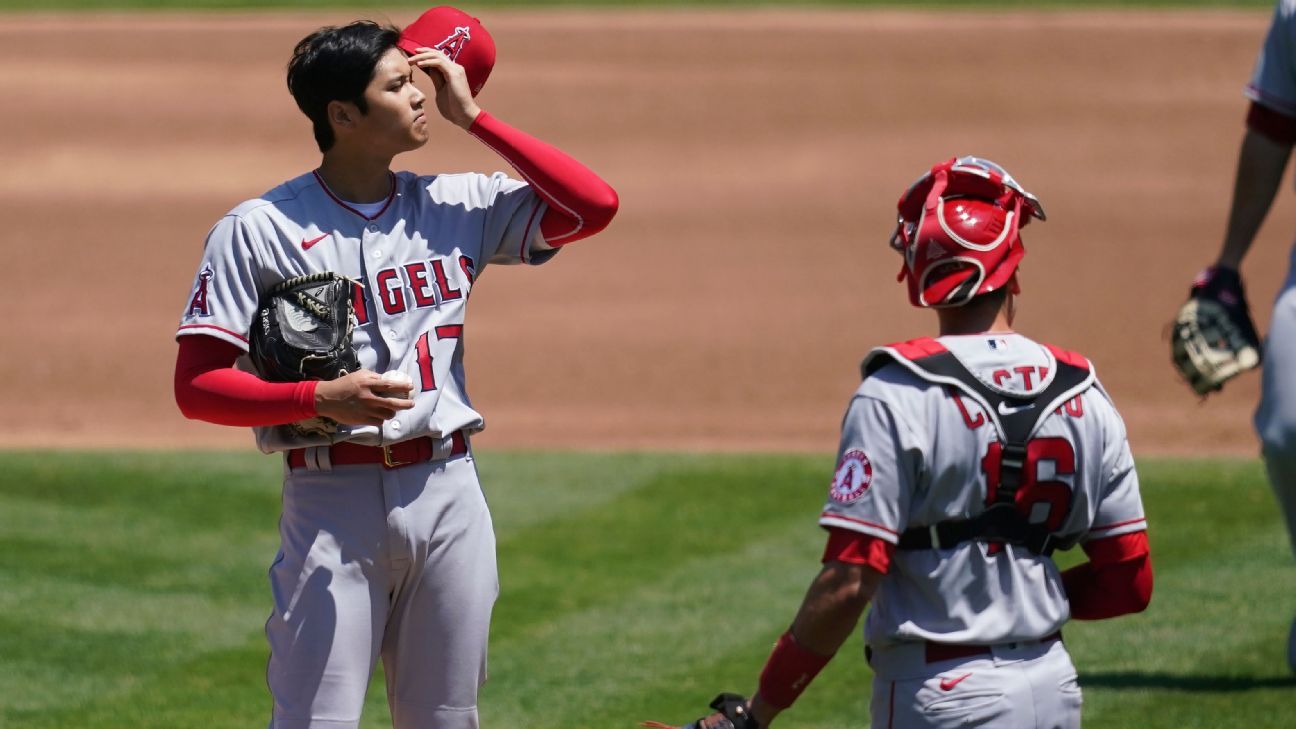 Shohei Ohtani, recovering from an injury near his surgically repaired elbow that has all but ruled out his ability to pitch again this season, would like to continue on as a two-way player, a stance that is consistent with those expressed by the Los Angeles Angels.

“If it comes down to them telling me to just focus on hitting or focus on pitching, I will listen,” Ohtani said through his interpreter on Wednesday, two days after being diagnosed with a Grade 1-2 strain of the flexor pronator mass in his pitching arm. “But ideally I would like to leave the window open for me to do both.”

Ohtani has contributed only 53⅓ innings as a pitcher since coming over as a highly touted two-way player from Japan in December 2017. He suffered a Grade 2 sprain of his ulnar collateral ligament in June 2018, then underwent Tommy John surgery four months later. Two starts into his return this summer, he recorded only five outs and complained of discomfort in his right arm, prompting the MRI that revealed what essentially is considered a forearm strain.

Ohtani, who will be the Angels’ regular designated hitter for the rest of this season and expects to return to the lineup on Thursday, described his latest ailment as “just a little inflammation” and said, “I don’t think it’s that severe.” He called the development “disappointing,” but also made mention of the idea that he was going to operate under a strict innings limit in 2020.

“I was kind of taking [this year] as like a part of my rehab process,” Ohtani said.

Ohtani was noticeably erratic through three starts against Angels hitters in intrasquad scrimmages last month. He debuted against the Oakland Athletics on July 26 — nearly 22 months after replacing his damaged UCL — but allowed five runs in the first inning and was removed before recording the first out. Before his next start, Angels manager Joe Maddon tried to ease some of the pressure off Ohtani by imploring him to have fun.

“In order to have fun, first of all, I think I need to feel 100 percent physically, which I wasn’t feeling,” Ohtani said. “Having fun wasn’t my first priority. I was trying to see how my body felt on the mound.”

Ohtani said he “didn’t feel 100 percent” in that first start, but it was “hard to actually pinpoint” how his latest injury occurred. He said he felt “tightness” in his elbow “throughout this whole rehab program,” but called it “natural.”

“It’s hard to differentiate the tightness, soreness, from the pain,” Ohtani said. “I knew I wasn’t going to be able to throw 100 mph again without feeling tightness, soreness or pain. So I was just taking this as part of the program.”

Ohtani’s fastball was sitting comfortably in the mid-90s in the first inning against the Houston Astros on Sunday, a game that began with a strikeout of George Springer on a nasty splitter. But Ohtani walked the first three batters to begin the second, then issued two additional walks after back-to-back strikeouts, prompting his removal after a 42-pitch half-inning. Ohtani’s last three fastballs did not break 90 mph.

“Obviously I felt some tightness while I was throwing those last three fastballs,” Ohtani said, “but earlier I think I threw 97 and I still felt the same way.”

Ohtani, 26, brings elite-level power and speed as a position player, but he also possesses a triple-digit fastball and a wipe-out splitter as a pitcher. When healthy, Ohtani has shown an ability — albeit in a small sample size — to juggle both roles effectively at the highest level. But the injuries and the setbacks continue to pile up, prompting questions about the sustainability of a role no player had taken on with regularity at the major league level since Babe Ruth.

“If the possibility is there, obviously I wanna try it,” Ohtani said. “And I think the Angels signed me thinking that I’m gonna be a two-way player. I just need to get back healthy on the mound and try to accomplish that.” 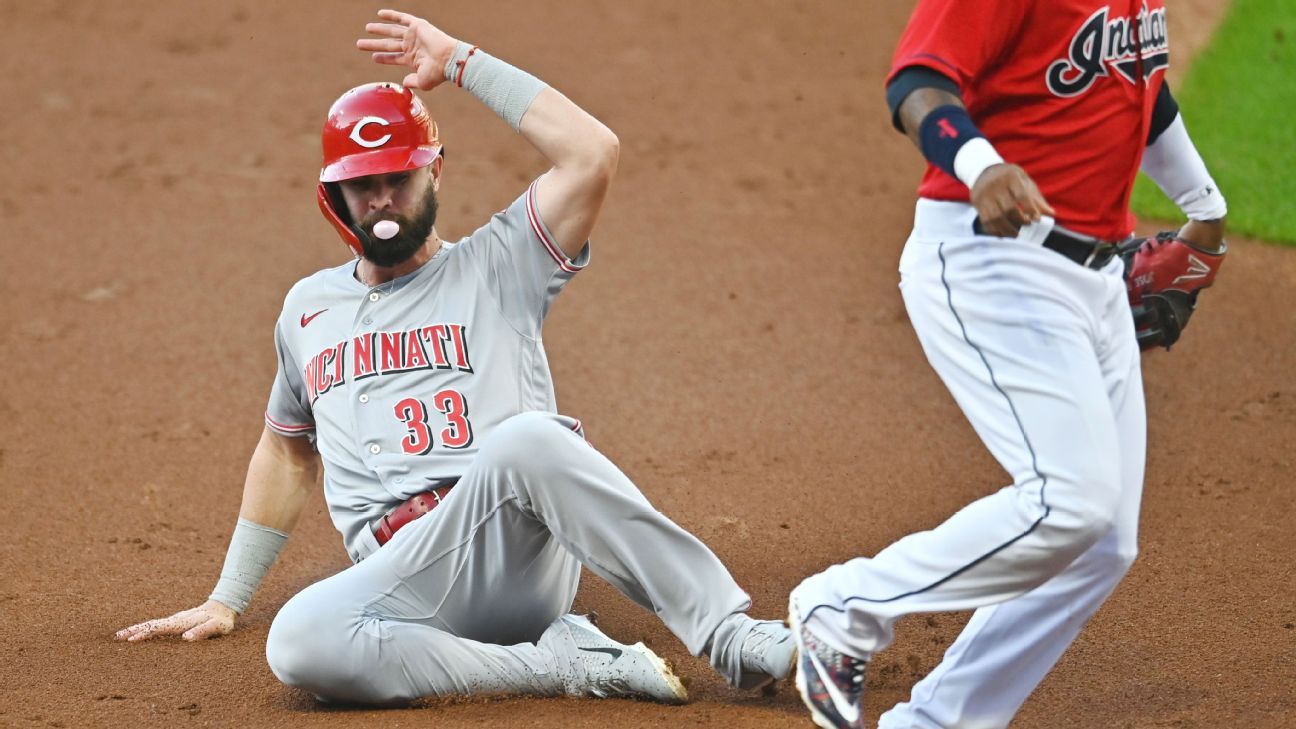 The Cleveland Indians and Cincinnati Reds are in the midst of a four-game, home-and-home series — a pleasant addition to the revamped 60-game schedule — and the battle of Ohio has produced some tight, exciting games. And that’s not all.

The teams also have engaged in a good-natured Twitter war, with Wednesday night’s exchange the latest example.

The Reds opened by taking a shot at the city of Cleveland, with the series moving to Cincy for Wednesday’s game.

Of course, the Indians weren’t going to let things end that easily, hitting Cincinnati where it hurt by insulting the city’s famous chili.

Tried some of that famous Cincinnati chili and look what it gave us … pic.twitter.com/1cVU1YcSnc 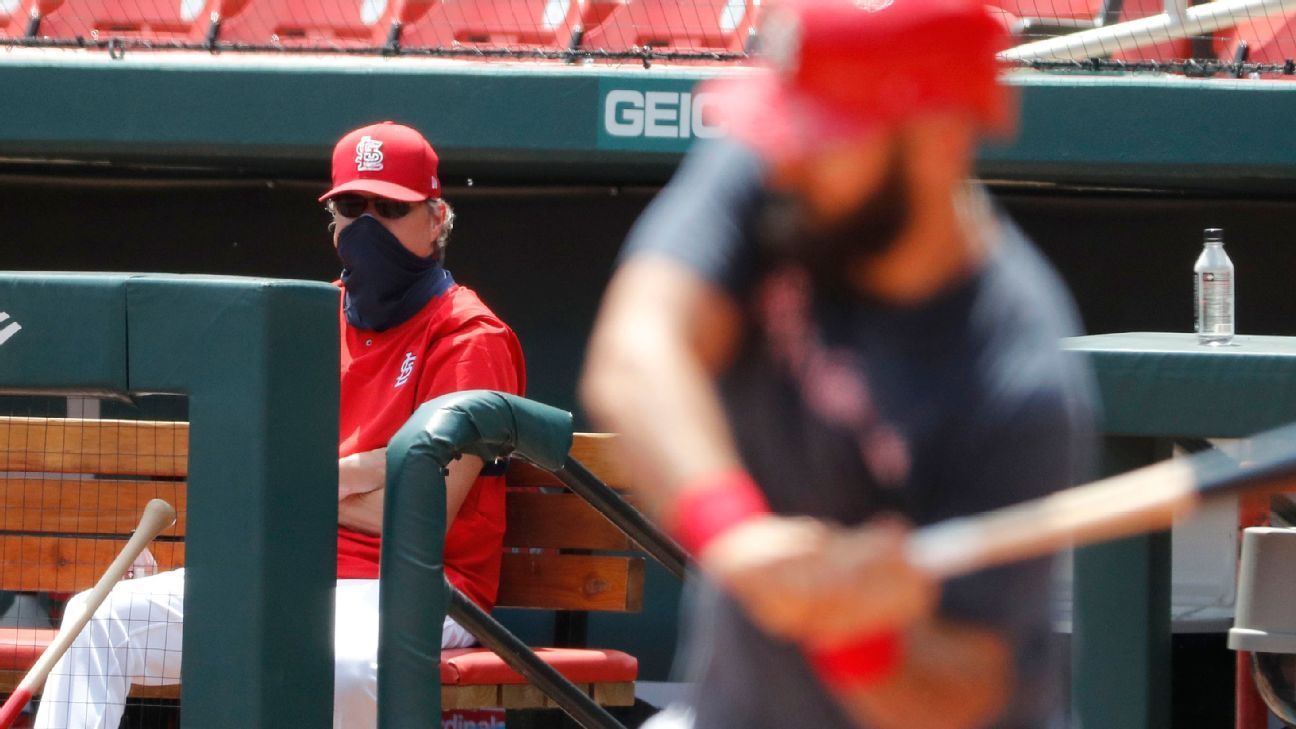 Professional sports leagues do everything in their power to make sure every team in their respective leagues play the same number of regular-season games. It creates equity and ensures that whoever reaches the postseason has earned that right accurately.

But the 2020 Major League Baseball season might throw that theory off considerably. A quick look at the standings shows that entering Wednesday’s games, 18 of the 30 clubs have played either 11 or 12 games. Three clubs have played either four or five games and three others have played eight games. Even if every team winds up playing the full 60-game schedule, it means several clubs will be bogged down with multiple doubleheaders, which always challenge pitching staffs, as well as potential in-and-out travel to a city to make up a game here or there.

The St. Louis Cardinals, hit with a coronavirus outbreak that severely affected their schedule during the past week, haven’t played since July 29 and aren’t scheduled to play again until Friday night against the Chicago Cubs, who have played uninterrupted and will have played 13 games in 14 days when they take the field at Busch Stadium. The Cardinals, meanwhile, have played five games.

“You can say it isn’t fair in our game, in our society,” Cardinals manager Mike Shildt said. “It’s definitely not what we’re used to. That being said, nobody said it was going to be fair or it was going to be easy. Nobody said you had to have it in a manner that was always equitable. The one thing you would like in a league is equality, but the fact of the matter is the integrity of getting through the season is first and foremost, and there are just going to be situations that come up that impact the ability for it to be fair, and that’s just inherent.

“So if you know that it’s going to have some imbalance to it and you accept that mentally and emotionally and don’t give in to it and appreciate the fact that it’s just the way it is, then you’ve created a mindset of the right way of how to compete with the different variables that are going to take place, and the challenges that are going to come with it.

“This is a tough, dedicated group. We welcome the competition, we welcome the challenge. And fair, unfair, whatever, that’s the world we live in right now. No one is going to feel sorry for us.”

The Cardinals have had six players and seven other members of their traveling party test positive for COVID-19. Shildt, the 2019 National League manager of the year, said the virus was brought into their group from the outside via an asymptomatic source. All-Star catcher Yadier Molina and shortstop Paul DeJong are among the six players to test positive.

On ESPN and the ESPN App; all times ET.
Don’t have ESPN? Get instant access.

The remaining players, who had been quarantined in their Milwaukee hotel since July 30, were finally allowed to fly back to St. Louis on Wednesday. Though Shildt has been in professional baseball for decades, many of his players have not and those are the ones he had to make understand the circumstances they’re now facing.

“It’s not a sell,” Shildt said of his message to his players. “Candidly, that’s the blessing of this team. I can tell you this group is really dedicated to each other and to figure out a way to get through this with the right mindset. We’ve got good leadership on this team. We’ve got a lot of quality guys. We’ve got high character people. We have good, good leadership, veteran experienced leadership. It’s not only coming into play about, hey man let’s think about your routine or deciding about taking a bat or about setting up a hitter. We have that too. But it’s more about, hey, we got you.