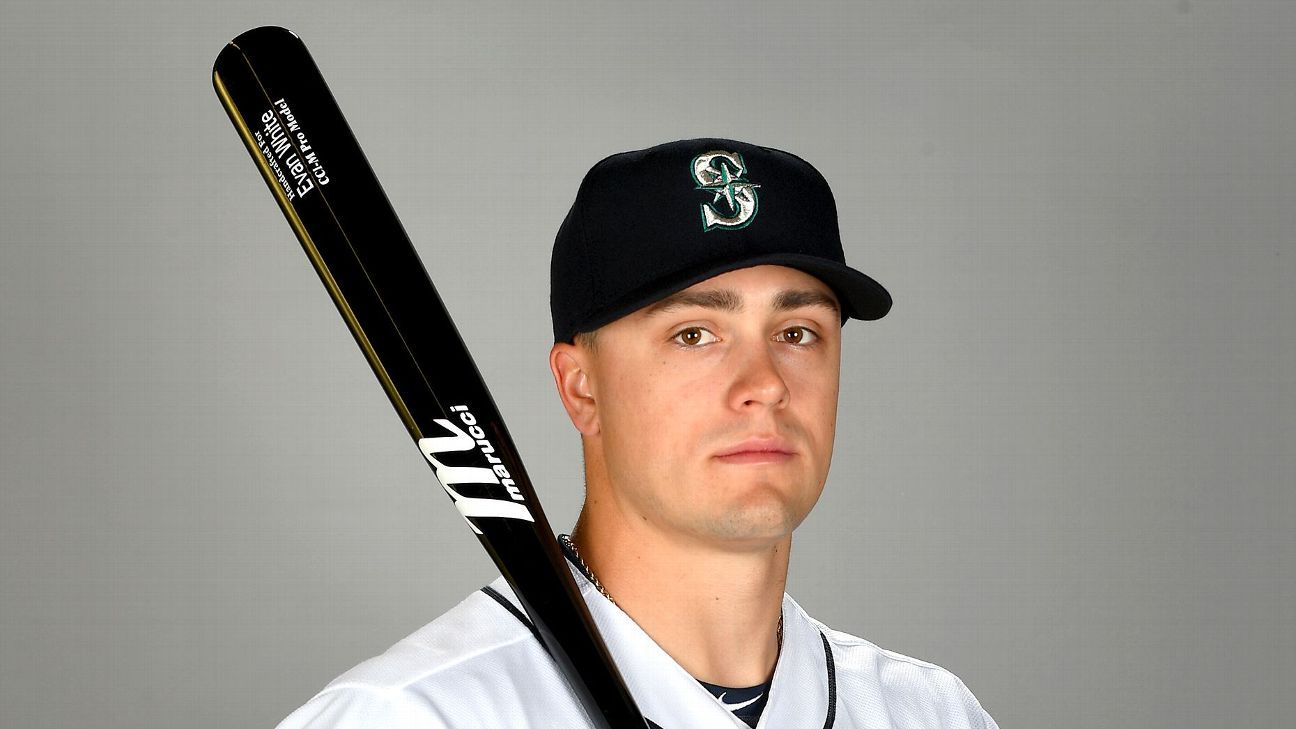 The Seattle Mariners and first-base prospect Evan White have agreed to a six-year, $24 million contract with three club options, sources familiar with the deal confirmed to ESPN’s Jeff Passan on Friday.

White, 23, spent all of last season at Double-A with the Arkansas Travelers of the Texas League. No player at that level ever has received a long-term extension.

In 2018, the Philadelphia Phillies signed Scott Kingery, who had played a full season at the Triple-A level, to a six-year, $24 million deal that could max out at $42 million combined.

Free agency is officially underway! These are the storylines you need to know to get through the winter.

White’s deal with the Mariners can max out in the mid-$50 million range, sources told Passan. Barring a disastrous spring training, White is expected to be Seattle’s first baseman on Opening Day.

MLB.com was the first to report White’s agreement with the Mariners.

A non-roster invitee to spring training last year, White had a .293 batting average with 18 home runs and 55 RBIs in 92 games while being named to the Futures Game last season.

The Mariners’ first-round selection in the 2017 draft out of Kentucky also was a Double-A All-Star selection by Baseball America.

In three minor league seasons, White has a .296 batting average with 32 home runs and 133 RBIs.

Which free-agent pitcher could be the next Gerrit Cole? 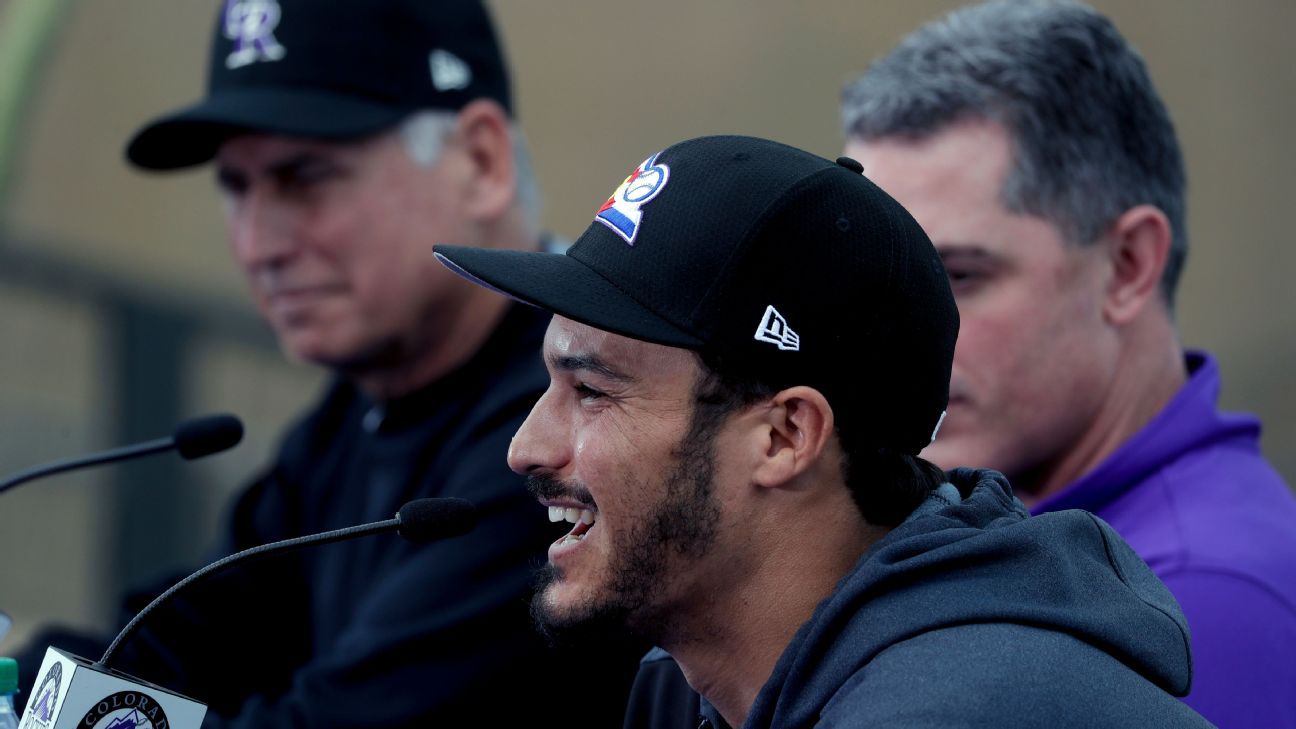 DENVER — There was left-hander Kyle Freeland discussing his new, pause-free delivery. And there was shortstop Trevor Story hinting at agreeing to a $27.5 million, two-year deal that he really wasn’t at liberty to discuss since it’s not official yet.

But there was no Nolan Arenado. And there was no media availability with general manager Jeff Bridich, either, during the Colorado Rockies fan fest Saturday at Coors Field.

Manager Bud Black recently reached out to Arenado, who said this week he felt a level of “disrespect” from the front office in the wake of trade rumors and the team not being active in player acquisition this winter.

Still, he fully believes that once the Rockies get to spring training, the situation will work itself out.

“Things are going to be fine,” Black said. “Players, they stay united. … It’s a group of players that is pretty bonded, pretty united.”

The notion that Arenado could be dealt began to bubble last month at the winter meetings in San Diego.

Black didn’t pay the speculation any heed then — or now. He says he hears those sorts of rumors “all the time.”

“I’ve learned that if something is really close to happening, or really serious, somebody who’s really in the know, sort of tells me,” he said. “That never really happened.”

Freeland’s view of the Arenado situation is this — focus on the mound.

“Everything that’s going on with that, it’s between him and Jeff,” the Denver native said. “Nolan’s the kind of guy that no matter what the situation is, he’s going to show up on time ready to play every single day.”

Freeland is looking to bounce back following a season where he went 3-11 with a 6.73 ERA and included a stint in the minor leagues to work on his mechanics. This after finishing fourth in the NL Cy Young Award voting in 2018.

He overhauled his delivery and eliminated the pause.

“Back to a more natural, old-fashioned type of delivery,” Freeland explained. “It’s more of one fluid motion to allow myself to repeat my mechanics easier and more often.”

On hand for fan fest was All-Star outfielder David Dahl, who’s hoping to rebound from another season interrupted by injuries. He missed time in ’19 with an abdominal strain and then a high right ankle sprain.

“It’s been freakish injuries,” he said. “I’m hoping it’s all behind me.”

Dahl downplayed the Arenado situation and how the team is dealing with it.

“I love Nolan,” he said. “I can’t really speak for Nolan right now. Right now, my focus is getting ready for the season and helping the team however I can.”

As for Story, he showed up to the park on the heels of a financially lucrative new deal — one that’s still waiting for the ink to dry. The All-Star shortstop had 35 home runs and 23 stolen bases last season. He also set career highs in runs (111), batting average (.294) and on-base percentage (.363).

For this upcoming season, among his goals are to steal more bases and be more of a vocal leader.

“Leading by example is more natural for me,” the 27-year-old Story said. “But I think it’s a total evolution of me trying to be the player I want to be.”

The Rockies tumbled to 71-91 last season under weighty expectations after making the postseason in 2017 and ’18.

Since the season ended, they’ve made no splashy free agent pickups. They’re sticking with a similar core.

Any message to the fans?

“We feel good about us and feel the fans should, too,” Story said.

Asked if he was worried about the rift between Arenado and the front office spilling into spring training or even affecting the team, Story responded: “Whatever happens, we’ll do a good job of handling it. … We’re just worried about our clubhouse and trying to win games. We’re all pros here and we’ll continue that way.”

LOS ANGELES — A group of Los Angeles Dodgers fans is making plans to vent its frustration at the Houston Astros about baseball’s sign-stealing scandal.

Houston and the Dodgers don’t play each other during the upcoming regular season, so Pantone 294 is snapping up tickets to the Los Angeles Angels‘ home opener against the Astros on April 3 in Anaheim, the Los Angeles Times reported. The group regularly organizes trips to support the Dodgers on the road.

Dodgers third baseman Justin Turner joined several of his teammates in expressing frustration at the Astros for stealing signs during the 2017 season, when Houston beat them in seven games in the World Series.

“It sucks for the fans as well,” Turner said during the team’s annual FanFest at Dodger Stadium. “It sucks for a lot of people.” 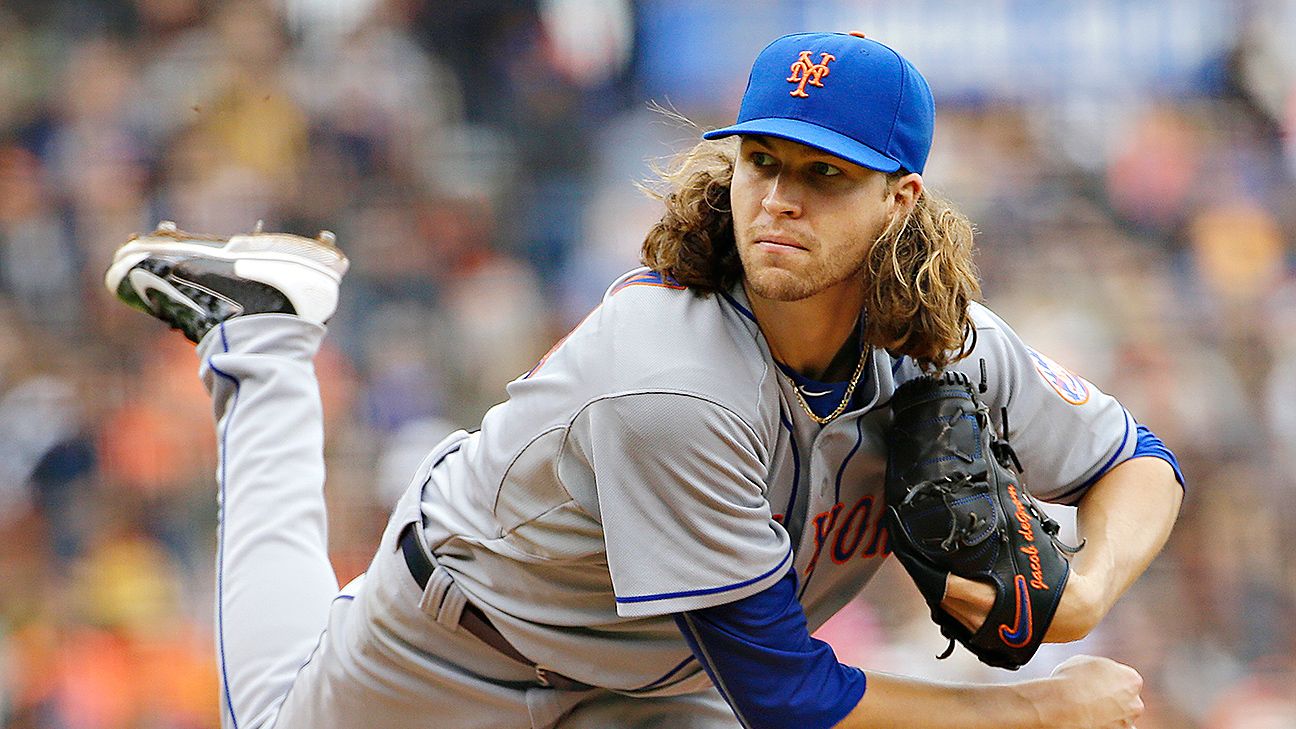 New York Mets ace Jacob deGrom pitched for new manager Luis Rojas in the minor leagues, as the two-time Cy Young Award winner was preparing his skillset for the majors.

So you can imagine deGrom’s enthusiasm, after New York’s rollercoaster offseason, that spring training is almost here and that there will be a familiar face captaining it.

“He knows the game of baseball really well,” deGrom said. “He communicates really well with everybody. You ask every guy in there that has been around him. Just a good baseball guy and a really good person.”

The Mets could use that type of steadying force after a dizzying four-month spell. After firing manager Mickey Callaway in October, the Mets hired Carlos Beltran to replace him in November, only to part ways with Beltran in January. Finally, with the sign-stealing scandal simmering a bit, and the roster all but set for spring training, New York ultimately ended up with Rojas.

The Rojas hire was, by far, the top talking point among the Mets on Saturday at the organization’s annual Fan Fest. While several members of the team were asked about the sign-stealing scandal, and Beltran’s role in it, it was clear the Mets are focused on their new manager and building off the momentum of last season’s finish.

“He definitely is looking out for your best interest. Like I said in the minor leagues, his goal was player development,” deGrom said. “Even talking to him last year, you can tell that is still his mindset. He wants you to be your best. Any time someone can get that out of players, it will definitely help the team.”

Pete Alonso, last season’s National League Rookie of the Year, also played for Rojas in the minors, long before becoming first Met to lead the majors outright in home runs with 53. He’s just enthused with the Mets’ choice.

“I think the stuff that happened with Carlos was very unfortunate. He’s very knowledgeable about the game,” Alonso said. “But I think Luis is going to do an absolute excellent job.”

On Friday, New York general manager Brodie Van Wagenen introduced Rojas, 38, by framing the huge expectations of a team led by deGrom and Alonso. “We have a collection of major league players,” Van Wagenen said, “that are talented and built to win right now.”

The Mets finished in third place in the National League East last season. At 86-76, they fell behind two playoff teams in their division, the Washington Nationals, who won the World Series, and the Atlanta Braves, who won the East. New York shook a ho-hum start with a summer flurry that vaulted the Mets into wild-card contention. Ultimately, they finished three games behind the final berth, before Callaway was let go.

“The way we played in the second half, we pretty much have the same group of guys coming back, so we’re excited,” deGrom said. “Looking forward to spring and getting things going. Just being around the guys, being up here for one day, it was like we never left. Just the vibe you get from them and everybody is excited so I think we’re ready to go.”

It’s now up to Rojas, New York’s fourth manager in less than three years, to harness that energy.

“Just kind of seeing him manage a game, dude never loses his cool, never hits the panic button. He’s always so prepared,” Alonso said. “He doesn’t just use his knowledge of the game, he uses his instincts very, very well. He’s paid his dues managing in the minor leagues.”

Rojas is the son of former Montreal Expos and San Francisco Giants manager Felipe Alou and the brother of former big league outfielder Moises Alou, who spent his final two pro seasons with the Mets from 2007-08. Rojas was minor league manager for eight years, Rojas has worked in the organization since 2007.

“My relationship with the guys on the team is a strong one. I feel very secure with how this relationship is gonna be with our roster,” Rojas said Friday. “We’re here to win. I know them, but it’s even better that they know me. I think that’s gonna help us.”

“The equity that he built, not only with the players but the organization and the coaches, was significant in terms of ultimately choosing him,” Van Wagenen said. “The players understand his voice. They know when he says something that it has purpose. He doesn’t waste a whole lot of words.”

DeGrom, who has clearly developed into a voice for the players, could not stress enough at Fen Fest how optimistic the clubhouse will be with Rojas at the helm.

“Everybody in that room knows what they need to do to get ready and I think everybody was comfortable with Luis,” he said. “Everybody knows him so I think that made it a little bit easier honestly.”