Scott McLaughlin was crowned Bathurst champion for the first time in his career on Sunday afternoon, along with his teammate Alex Premat, but the actions of his other teammate were branded “disgraceful”.

The safety car completed nearly the same number of laps as some of the drivers in a dramatic race and it was what happened as it retreated back to the pits following the crash of American wildcard Alexander Rossi on lap 134 that caused the most controversy.

With McLaughlin stuck in an epic battle with Jamie Whincup, his teammate in the No.12 car Fabian Coulthard took one for the team by holding up the rest of the field while the No.17 car gained a track advantage on his rivals. 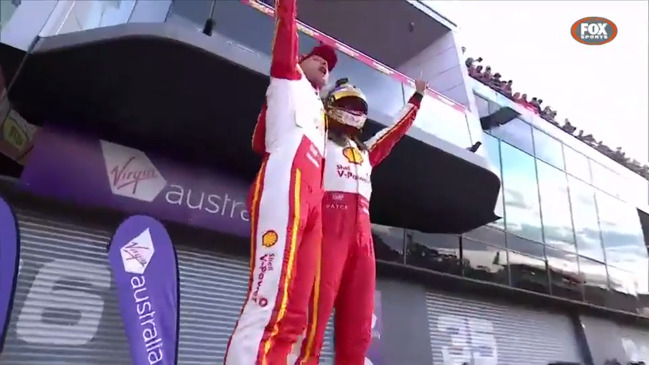 McLaughlin is Bathurst champion for the first time in his career

One of the cars held up was that of Shane van Gisbergen, who eventually finished second in the Great Race, crossing the chequered flag less than a second behind McLaughlin in a tense final lap.

Coulthard was punished for his actions with a pitlane penalty but the damage was done, with Van Gisbergen and others left well off the pace of McLaughlin.

However, his actions were branded “disgraceful” by Supercars legend Larry Perkins, who texted on-air reporter Neil Crompton during the race to express his disappointment with Coulthard and Shell V-Power’s sportsmanship.

Coulthard’s engineer was telling him to “slow down” repeatedly as he was unaware where the incident which flagged the safety car while Van Gisbergen bemoaned the Mustang was going “stupidly slow”.

However, team boss Ryan Story insisted there was a problem with overheating of the car, which wasn’t voiced over the radio at the time.

“There’s a bit more gamesmanship than we thought,” said Mark Skaife after the race.

TWO TEAMMATES WERE HUNTING DOWN BATHURST LEADERS. AND THEN AN UNTHINKABLE DISASTER HAPPENED

“Everybody’s responsibility is to slow down, but what he is really saying to Fabian isn’t about the car overheating or anything else, [he’s saying] ‘there’s debris on the road’ and he was trying in that scenario to come up with a plausible reason for why Fabian backed it up that far.

“Clearly he was doing it because he didn’t want to double stack when he got to the pit area, but you can hear Shane van Gisbergen was not a very happy camper.:

Whether or not it made a difference at all in the end is a different matter given there were plenty more safety cars still to come, but McLaughlin will be sure to buy his teammate a beer at the celebrations afterwards.

Daniel Ricciardo has added his voice to the Black Lives Matter movement, branding the death of George Floyd as a “disgrace”.

The Australian F1 driver took to Instagram on Monday, speaking out against racism and calling for society to improve.

His message came soon after Lewis Hamilton — F1’s only black driver — slammed his colleagues for a mute response over Floyd, who died at the hands of a white police officer who pressed his knee on his neck.

“Seeing the news the last few days has left me saddened, what happened to George Floyd and what continues to happen in today’s society is a disgrace,” Ricciardo posted.

“Now more than ever we need to stand together, unified together.

“Racism is toxic and needs to be addressed not with violence or silence but with unity and action.

“We need to stand up, we need to be a WE. Let’s be better people.

Hamilton had earlier posted to Instagram, writing: “I see those of you who are staying silent, some of you [are] the biggest of stars yet you stay silent in the midst of injustice.

“Not a sign from anybody in my industry which of course is a white dominated sport. I’m one of the only people of colour there yet I stand alone.

“I would have thought by now you would see why this happens and say something about it, but you can’t stand alongside us. Just know I know who you are and I see you…”

Fernando Alonso is in the running for a sensational return to Renault ahead of the 2021 Formula 1 season.

After the French marque lost Daniel Ricciardo to McLaren, they are having to survey their options for Esteban Ocon’s new teammate.

Renault boss Cyril Abiteboul is determined to take his time in hiring a driver for next year however, with Sebastian Vettel also thought to be on their radar.

No travel exemption for F1

He told Radio Montecarlo: “There can be many drivers, there are great drivers who are free next year.

“The one you have mentioned [Alonso] is an option. Although there are others.”

Alonso was snapped up by former Renault chief Flavio Briatore while still a junior racer and he made his F1 debut with the team in 2003, before scooping consecutive Drivers’ Championships.

A switch to McLaren didn’t last long and he returned for a further two years ahead of a stint at Ferrari.

Turning 40 in just over 12 months’ time, he would be among the oldest racers on the grid but has kept his eye in with drives in the Dakar Rally, World Endurance Championship and IndyCar.

But a decision on his potential return to F1 is not expected anytime soon with Abiteboul stressing Renault’s patience in picking a new driver.

He noted: “The only thing I am saying is that we are going to take time to reflect.

“It is an extremely important decision and we do not want to enter the dynamic of Ferrari or McLaren, who will have their reasons for [announcing their line-ups early].

“Honestly, deciding on a driver in a season that has not yet started [and] seems a bit strange to us.

“Choosing the driver is the last piece of the puzzle in the reconstruction, hence the importance of taking our time and doing things well.”

Lewis Hamilton has publicly expressed his disappointment as he “stands alone” in a “white-dominated sport” which he says is silent on the death of George Floyd.

A video of Floyd, handcuffed and struggling to breathe as a white police officer pressed his knee on his neck, has sparked outrage and protests across American cities.

The sporting community has rallied in tribute to Floyd, with stars from Michael Jordan to upcoming football sensation Jadon Sancho all helping spread the message of defiance against police brutality and in support of the black lives matter movement.

However, Hamilton as one of the few drivers of colour in the sport, has used his platform to call for action from the motorsports community.

The six-time World Champion posted a statement to Instagram criticising his fellow drivers for their silence.

“I see those of you who are staying silent, some of you [are] the biggest of stars yet you stay silent in the midst of injustice,” he posted to Instagram.

“Not a sign from anybody in my industry which of course is a white dominated sport. I’m one of the only people of colour there yet I stand alone.

“I would have thought by now you would see why this happens and say something about it, but you can’t stand alongside us. Just know I know who you are and I see you…”

Hamilton clarified in a second post that he did not condone the destruction of property and businesses that has come with the protests.

“I do not stand with those looting and burning buildings but those who are protesting peacefully.

“There can be no peace until our so called leaders make change. This is not just America, this is the UK, this is Spain, this is Italy and all over.

“The way minorities are treated has to change, how you educate those in your classism and that we are all the same! We are not born with racism and hate in our hearts, it is taught by those we look up to.”