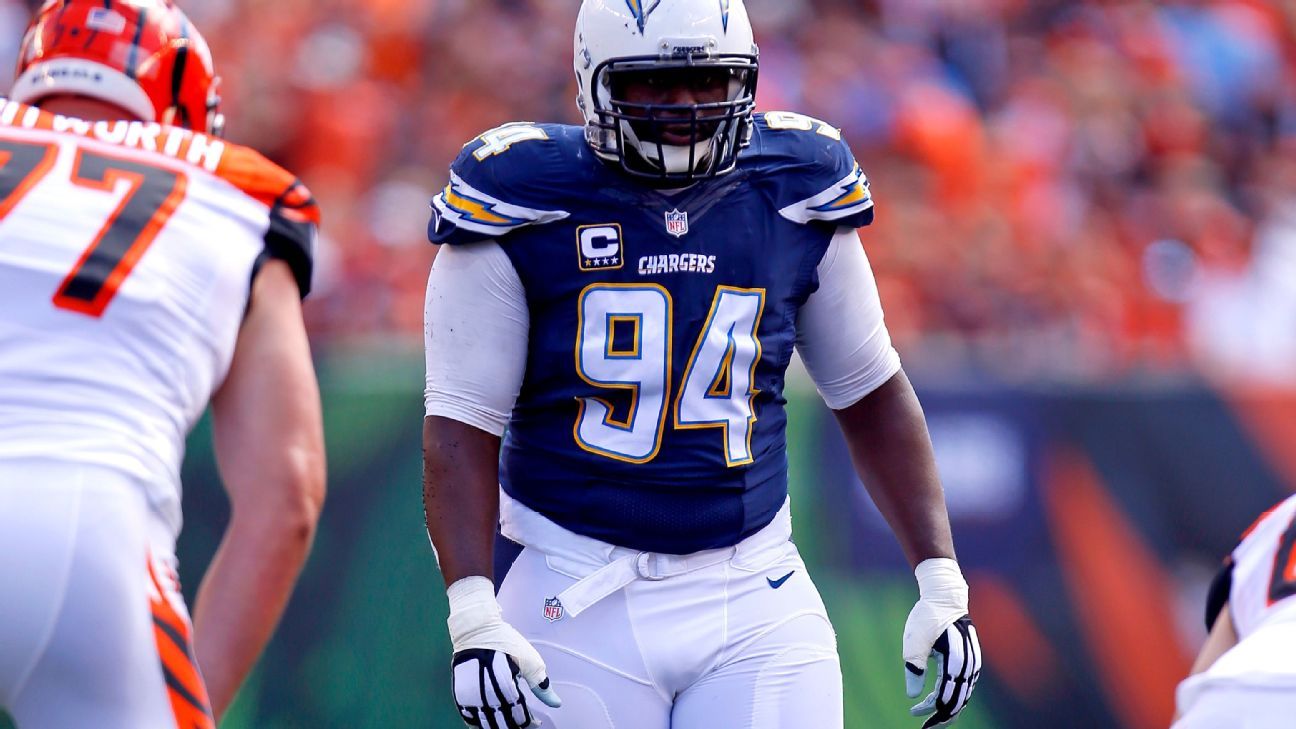 “I made a mistake and take full responsibility,” Liuget said in a statement. “As part of my training program, I placed my trust in someone who, in hindsight, was not well-versed in the NFL’s policy on banned substances. As players, we’re told time and again that the NFL holds you responsible for anything in your body.

“Even if you take it accidentally, it’s on you. Pretty cut and dry. You hear it and think, ‘That won’t be me, that can’t possibly happen to me.’ Yet here I am, suspended four games. And that’s my fault. I apologize to our fans, my family and the entire Chargers organization. I hate that I won’t be able to be there for my teammates to start the season, but I will turn this into a positive. When my number is called, you can count on me being ready to answer that call.”

Liuget is eligible to participate in all offseason activities and preseason practices and games.

The organization said it is standing by Liuget.

“Even though Corey’s mistake was unintentional, he understands how disappointing this is for everyone in the organization,” Chargers general manager Tom Telesco said in a statement. “I’m pleased he has accepted responsibility on the matter, and we respect and support the League’s decision. We also support Corey. Few people have a bigger heart and have done more for the community. While nobody feels worse than Corey himself right now, we know he will bounce back from this.”

Selected No. 18 overall by the Chargers in the 2011 draft, the 28-year-old Liuget was slated to make $8 million in total compensation for the 2018 season.

The Illinois product played solid defense inside last season, finishing with 21 combined tackles, 1.5 sacks and a forced fumble in 12 games while garnering some Pro Bowl votes.

However, Liuget has just 4.5 sacks in the past three seasons, and the Chargers have young, emerging talent at defensive tackle in Darius Philon and Isaac Rochell.

A South Florida native, Liuget recently met and worked out with the Marjory Stoneman Douglas football team and set up a scholarship fund to honor former assistant coach Aaron Feis, one of the 17 victims of the Parkland shooting, as a way to help his grieving community deal with the aftereffects of a mass shooting. 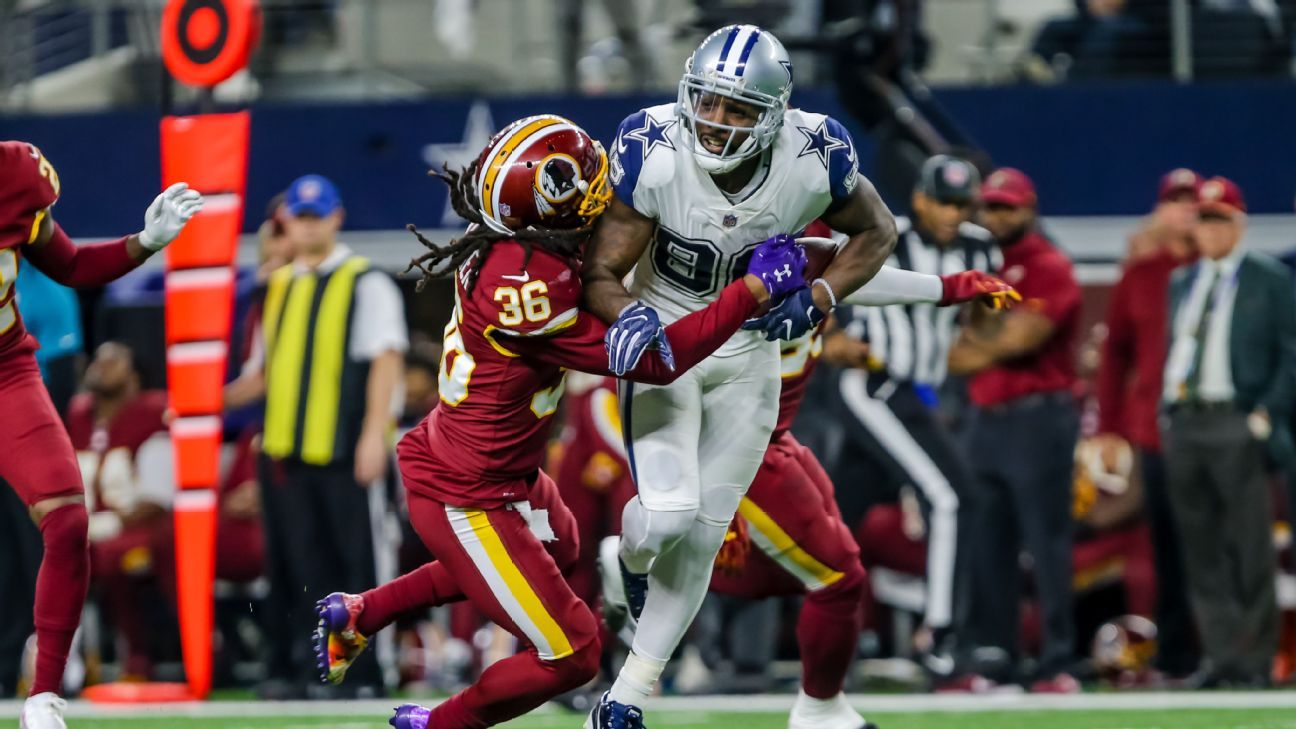 Bryant gets a chance to come to a Super Bowl contender in Baltimore (5-1) and show the football world that he has something left at the age of 31. The Ravens get a much-needed physical and emotional presence in a lagging passing game while taking no risk (or financial commitment) at all.

The Ravens are coming off their bye with the 31st-ranked passing attack and the least productive wide receivers in the league. Lamar Jackson has thrown two touchdown passes and two interceptions when targeting wide receivers this season, which is a significant dropoff to his numbers when throwing to tight ends and running backs (eight touchdowns and no interceptions). The hope was for Miles Boykin, a third-round pick from a year ago, would take a significant step forward in his second season and become a solid complement to Marquise “Hollywood” Brown. But Boykin has failed to gain any chemistry with Jackson, and their recent miscommunications have become a topic of discussion during the bye. If nothing else, Bryant’s arrival could motivate the likes of Boykin and Willie Snead.

When will Bryant play?

It really depends on how quickly Bryant can get into football shape. The last time Bryant played in an NFL game, Jackson was throwing touchdown passes at Louisville. It seems highly unlikely Bryant would get elevated to the active roster for Sunday’s showdown against the Pittsburgh Steelers. The Nov. 8 game at Indianapolis is a more realistic target, but there are no guarantees. That’s why Bryant was signed to practice squad and not 53-man roster. It’s the ultimate prove-it situation.

Bryant becomes Jackson’s No. 3 option, behind Brown and tight end Mark Andrews. He provides what Baltimore’s passing game is lacking: a physical target on the outside who fights to win those contested catches. This season, the Ravens have made 10 catches on 26 tight-window targets (when the distance between the receiver and nearest defender is less than one yard at the arrival of the pass). Boykin has not made a catch on five such throws this year. Bryant, who is 6-2, also brings size, experience and a fiery edge. Of the six receivers on Baltimore’s 53-man roster, only one is taller than 6-1 and no one is older than 27.

Bryant gets cut after struggling to get separation or gets hurt before he can throw up his first X in Baltimore. No one in the Ravens organization believes they’re getting the same Dez Bryant who was one of the most dynamic offensive players in Cowboys history. The Ravens are in a situation where they have a need at wide receiver and they don’t have much salary cap room to really address it. Why wouldn’t Baltimore take a flier on a highly motivated and strong-willed personality like Bryant?

How will this realistically end?

• Fantasy fallout: How to sort out Steelers WRs
• Winfield Jr. relies on Dad’s FaceTime calls
• What to expect from Tua in first start
• Chiefs like their new RB duo
• Morris’ biggest challenge with 1-5 Falcons

The Ravens have a really good track record with 30-something wide receivers: Derrick Mason, Anquan Boldin and Steve Smith Sr. But this is really uncharted waters with Bryant as far as comebacks. According to the Elias Sports Bureau, he’s attempting to become the second Pro Bowl wide receiver to miss two full seasons and then return to the NFL since the 1970 merger. Josh Gordon was the first and he was five years younger than Bryant when he did so. The truth is no one really knows how productive Bryant will be. No one should be rushing to add Bryant to their fantasy teams. But no one should be writing him off just yet, either. 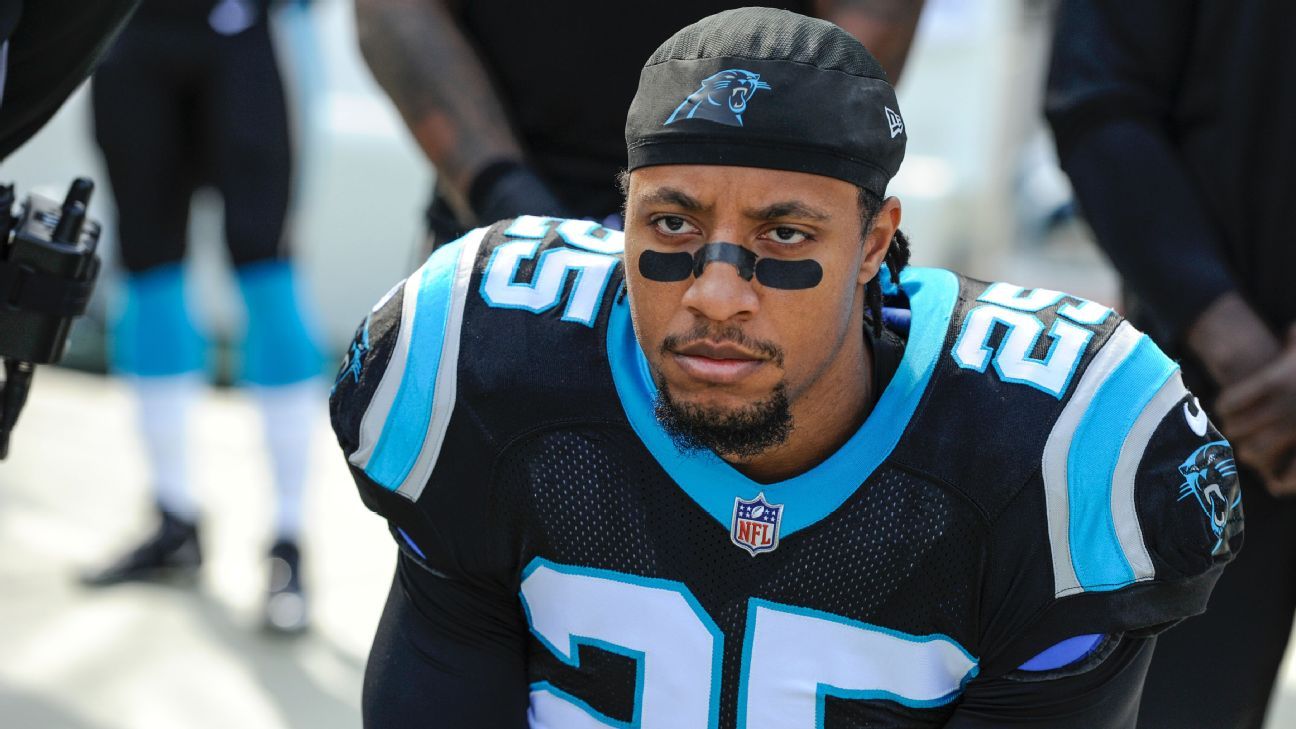 Washington (2-5) lost safety Landon Collins to a season-ending Achilles tendon injury in a win over Dallas on Sunday. Rookie Kamren Curl, a seventh-round pick, will replace him for now.

“I just don’t think playing on the practice squad is reflective or indicative of my career,” Reid said in a phone interview on Tuesday.

Rivera also added: “If we didn’t (have Collins), believe me, I’d call him. I think he’s a guy that has the ability to play in this league and hopefully, if somebody needs a strong safety, he’s a guy they would call.”

Washington had a need and made the call but only for a practice squad spot.

Reid has been working out and waiting for an opportunity to join a team’s active roster. He said he was told Washington wants to give Curl a shot at starting.

“I’m just not in a place to play on the practice squad right now,” Reid said, adding that he texted Rivera to let him know his decision. “If they go a different direction, I’ll be ready.”

Reid had 130 tackles, four sacks, six passes defended, two fumble recoveries and a forced fumble in 2019. The tackles and sacks are the most by a Panthers safety in one season.

A first-round pick by San Francisco in 2013, Reid went to the Pro Bowl in his rookie season. He joined Colin Kaepernick in 2016 when the former star quarterback took a knee during the national anthem to protest police violence, racism and social injustice.

Kaepernick hasn’t played in the league since that season and Reid sat out the first three weeks of the 2018 season before Carolina signed him. Both players filed collusion grievances against the NFL and settled their cases in February 2019.

Despite a losing record, Washington is a contender in the NFC East. The first-place Eagles are 2-4-1 and lost at Washington in Week 1. 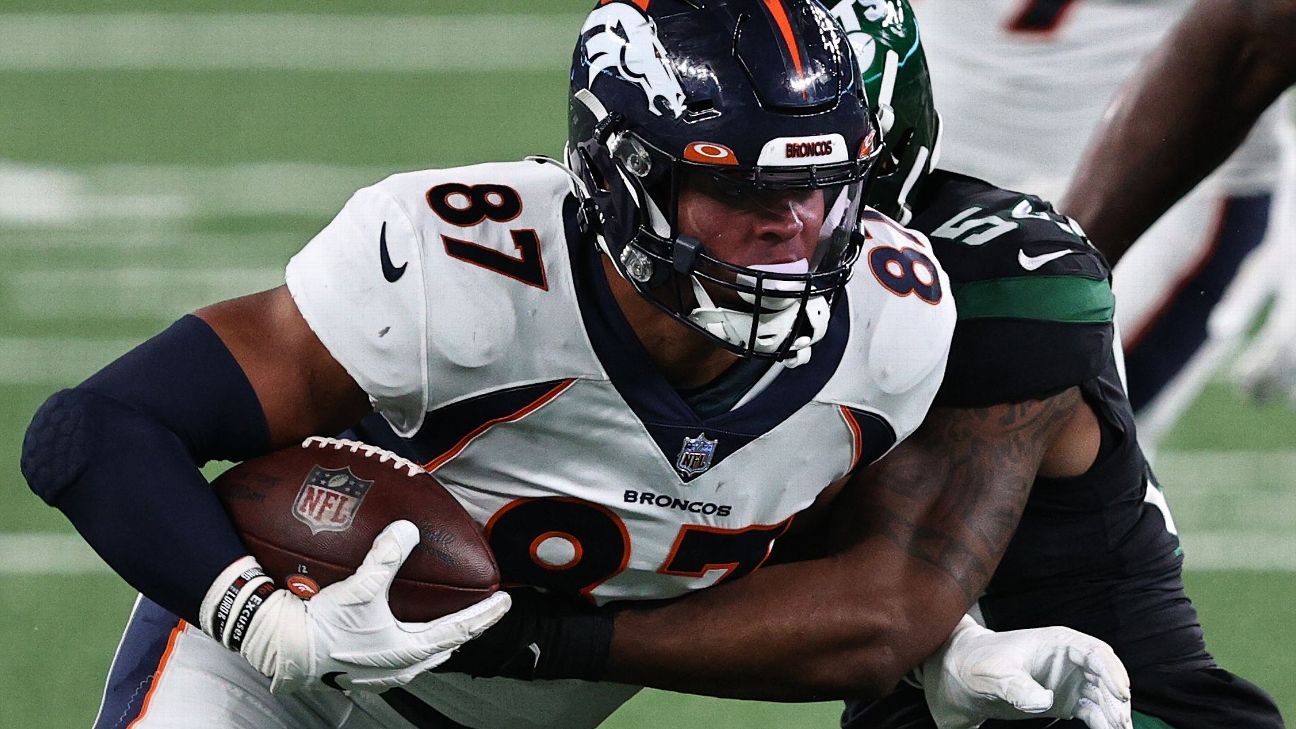 ENGLEWOOD, Colo. — In the wake of Sunday’s 27-point loss to the Kansas City Chiefs that dropped the Denver Broncos offense to 28th in the league and the team to 2-4, Broncos tight end Noah Fant said it’s time for the offense to “put up or shut up” about its potential.

“I don’t have bad attitude about it right? But I’m definitely not happy with the results that we have right now, right? It’s unacceptable,” Fant said Tuesday. “We want to be better than what we’re doing … you look at the numbers and we’re not living up to our potential and we have so much ability, so much talent on the offensive side of the ball, and we have to figure out how to make these things work.

“I’m still positive about it, but at some point it’s like, put up or shut up, and buckle down and get these things going.”

The Broncos have a first-year starter at quarterback in Drew Lock; wide receiver Courtland Sutton (knee) is on injured reserve; and running back Phillip Lindsay has missed three games as well as the second half in two others with injuries. But Sunday’s loss made it clear the growing pains on offense are a big part of the team’s stumble out of the gate.

The Broncos held the Chiefs to 286 total yards, 0-for-7 on third down, and quarterback Patrick Mahomes had just 15 completions, only one longer than 22 yards. But Lock threw a pick-six, Melvin Gordon fumbled twice and the Broncos surrendered a 102-yard kickoff return for a touchdown.

With Lock having missed two games and most of a third with a shoulder injury, the Broncos have started three different quarterbacks and have finished with 254 or fewer passing yards in four games, have thrown nine interceptions in the past four games combined and have just six touchdown passes all season.

Broncos coach Vic Fangio said Monday that the struggles were “an 11-man operation.”

“As far as the passing game goes … hopefully everybody is able to get involved,” Fant said. “Like Coach said, I think it’s a little bit of everybody, right? We all have to take responsibility, we all have to figure out exactly what’s going on and come up with a solution.”

Defensive players such as defensive end Shelby Harris and linebacker Bradley Chubb showed plenty of frustration on the bench and after the game.

“There was definitely words said in the locker room after the game,” Fant said. “I’m not going to go into detail, that stays in the locker room, but they have every right to be frustrated and upset. … I put a lot of the load on us; Kansas City had one of the most powerful offenses, one of the most high-octane offenses in the league, right? And they were holding them to field goals, getting three-and-outs on them, all these things, and we’re not really living up to our ability on offense. If I was in a defensive player’s position, I would feel the exact same way. Those guys have every right to be heated and upset.”

“They have the credibility and the right to do it in this locker room,” Lock said. “They have a right to express their feelings without a doubt; they have the right to tell someone straight to their face, You need to pick your s— up. And if they were to come up and tell me that, I wouldn’t mind.”

Chubb, who said he was expressing much of his frustration after Mahomes threw his only touchdown pass of the game to Tyreek Hill in the fourth quarter, said he sees a young team trying to find its way.

“Drew Lock, man, he’s one of the greatest kids you’ll ever meet, he goes out there with passion. … I know he’s going to change it around, I know the offensive linemen are going to continue to block their asses off, I know the receivers are going to catch those 50-50 balls — I know it, I believe it.”

MLB Power Rankings, way-too-early edition — How Dodgers, Rays and all 30 teams stack up for 2021