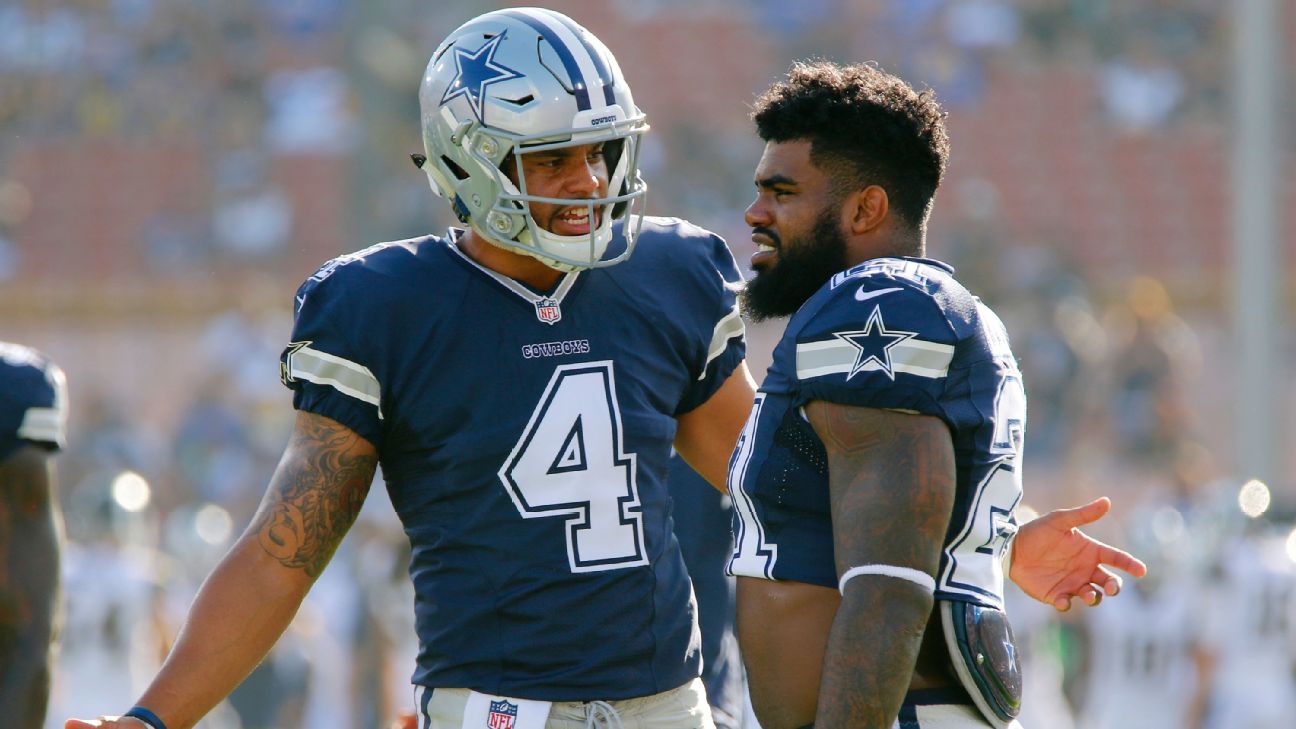 Monday’s question: Can the Eagles command the East the way they did under Andy Reid?

Tuesday’s question: How will Alex Smith’s addition to the Redskins affect the division?

Wednesday’s question: Should we expect a different Eli Manning with Pat Shurmur as the coach and Dave Gettleman as the GM in New York?

Thursday’s question: What’s the view on the Cowboys a year after Dak Prescott and Ezekiel Elliott led them to a 13-3 record?

Archer: The value of Elliott rose in 2017 because of how far the Cowboys and Prescott fell during the six-game suspension that shelved the running back for all but two of the final eight games. Dallas stumbled to 9-7 after its NFC East-winning 13-3 mark in 2016. I would have voted Elliott as the Rookie of the Year in 2016 over Prescott. That’s not to slight the quarterback, but Elliott was the engine of that team. In the second half of the 2017 season, Prescott threw for more than 212 yards in a game just once. He had nine of his 13 interceptions in that second half. But I don’t believe Prescott had a “sophomore slump.” It was more what happened around him than what he did or did not do. To me, there is no reason to think the Cowboys won’t compete for a playoff spot in 2018. Although Dallas has been to the playoffs just twice in Jason Garrett’s tenure, the Cowboys have been in contention for the NFC East title or a playoff spot every season but 2015. For the Cowboys to succeed again offensively, they need a full season of Elliott and Prescott benefiting from the looks Elliott gets from the defense. The formula Dallas followed in 2016 is a formula that can work again in 2018.

Keim: A lot of skepticism. The troubling part last season was Prescott’s performance during Elliott’s six-game suspension. I liked Prescott a lot as a rookie — he had terrific poise — but he stumbled in 2017. However, the Cowboys’ struggles were about more than just Elliott’s absence; they showed how reliant not just Prescott but also the entire offense was on Elliott. They need more from the receiver position to make this attack more multi-dimensional. Prescott and Dallas’ offense just weren’t good minus Elliott. In six games without him, Prescott threw five touchdowns and seven interceptions (as Dallas averaged 18.3 points), compared to 17 touchdowns and six picks when Elliott played (and 24.4 PPG). It’s really hard to know the direction Dallas is headed. The Cowboys’ defense, if it keeps DeMarcus Lawrence, continues to improve and could be the strength of the team next season. But what will Prescott do? Can Elliott not just bounce back but also have the same impact he did as a rookie? If they enter next season with Dez Bryant as their top receiver, 2018 will look a lot like 2017.

McManus: The formula for success seems to be pretty straightforward. When the Cowboys are able to lean on Elliott and that offensive line, everything else falls into place. Prescott gets put in better situations, the defense is less stressed, and victories are much easier to come by. When Zeke is not the centerpiece, the operation tends to get a little out of whack, as evidenced by Dallas’ 9-7 finish in 2017. With Elliott back, I’m sure the Cowboys will return to the blueprint that led them to a 13-3 record in 2016. It seems important, though, for the Cowboys to find a way to be less dependent on a single player, particularly in the wake of Elliott’s suspension last season. One way to cure that issue is for Prescott to take a step forward in his development. His numbers went down across the board in 2017 after a stellar rookie season. That’s somewhat understandable, given the turmoil surrounding the team, but now’s the time to get the arrow pointing back up. An infusion of young talent at the receiver and tight-end positions might help in that cause. As we’ve seen in the NFC East over the past decade-plus, a lot can change in a year. Although the Eagles appear to be well-positioned for a run of success, it’s quite possible that Dallas gets off the mat and makes a playoff charge this season. But that will happen only if Elliott shows maturity and Prescott delivers.

Raanan: The Cowboys are dangerous. They are poised for a bounce-back season with Elliott not suspended and Prescott having seen the adjustments that were made against him following a standout rookie season. The 2017 season was undoubtedly a shot of reality for Prescott. He’s maybe not quite as good as 2016 suggested, but he’s probably somewhere in between his rookie performance (23 TDs, four INTs) and sophomore campaign (22 TDs, 13 INTs). Dallas’ defense is gradually improving its talent base, and if the Cowboys can add another serious weapon for Prescott in the passing game, they should be a really good offense with Elliott running behind that still-imposing line. The Cowboys went 9-7 during a 2017 season in which they had a tough schedule and didn’t meet expectations. They appear primed to improve this season if they can avoid any internal implosions, which always seems to be in play in Dallas, particularly with Jerry Jones as the owner and a Dez Bryant decision looming.