SOCCEROOS goalkeeper Mat Ryan has played a key role in equalling one of the Premier League’s most unwanted records, while new pictures of Spurs’ new stadium have emerged.

Socceroos goalkeeper Mat Ryan has played a key role in teammate Lewis Dunk equalling one of the Premier League’s most unwanted records.

As Tammy Abraham’s rifled strike deflected off Dunk into the back of the net, the centre-back matched former Liverpool defender Martin Skrtel (2013/14) in conceding the most own goals in a single Premier League season.

Dunk has now beaten teammate Ryan on four separate occasions this campaign, with the other three coming against Manchester United, Manchester City and Liverpool.

With ten games still to play this season, the 26-year-old could easily steal the title all for himself… but Ryan might have something to say about it!

Probably not a record either player wants to be associated with.

Tottenham’s White Hart Lane facelift is set to light up London amid revelations the stadium will be covered in LED lights which will shine on match days.

The £850m stadium, which stands on the site of the old White Hart Lane, appears similar to Bayern’s Allianz Arena in newly released images.

Football.london suggest that 1600 people are working to ensure the ground is ready for the start of next season.

170 panels which will each have multiple LED strip-lights have been installed – with documents available suggesting the lighting plans were submitted to council last November.

Emirates have sponsored the French giants since 2006, and utilised the footballers as flight staff on ‘flight 4-3-3’ in their somewhat cringeworthy new ad.

That’s one way to reduce Neymar’s reported ‘boredom’ in Paris!

Manchester United manager Jose Mourinho believes his club’s history is more important than his personal baggage as he prepares to host old side Chelsea in a crunch Premier League clash on Sunday.

Mourinho won three Premier League titles in two spells as Chelsea boss between 2004 and 2015, but his relationship with his former employers has been strained by a war of words with Chelsea boss Antonio Conte.

However, Mourinho insisted that United’s clash at home to Liverpool in two weeks’ time is more of a special occasion given the historical rivalry between England’s two most successful clubs.

“Playing Liverpool in a few weeks means more because for my club — and everyone knows that the most important thing is not me — to play Liverpool has a special meaning,” he said. “That’s the way I have to look at things.

“In fact, every club I left — by my decision or by the board — I have very good feelings towards them. I’ve never played against Inter since I left, but I’ve faced Porto, Real Madrid and Chelsea, the feeling is a good one. It’s not a special thing.” Liverpool’s 4-1 thrashing of West Ham on Saturday means United will kick-off at Old Trafford (1405 GMT) trailing their bitter rivals by a point in third place.

Mourinho is under pressure not only to win in the context of a four-way battle for three Champions League places behind runaway leaders Manchester City, but also to entertain in front of an expectant home crowd.

The Portuguese’s cautious tactics in a 0-0 draw away to Sevilla in the first leg of their Champions League last 16 tie on Wednesday were heavily criticised.

Mourinho once again left club-record signing Paul Pogba on the bench in Spain in favour of 21-year-old midfielder Scott McTominay.

McTominay’s rise to prominence under Mourinho has led to a battle for his services at international level between England and Scotland.

Eligible for England by birth, having been born in Lancaster, McTominay also qualifies for Scotland via his father.

And Mourinho said his player should listen to the advice of his parents over his manager when deciding who his international future should lie with.

“I’ve given him my advice but I think the advice of his parents is more important than mine,” added Mourinho.

“His own heart is more important than my advice, because mine is purely from a career point of view.

“More important than his career is his feeling, his family’s feeling and also the overall situation with him.”

Could Tottenham vs Rochdale be POSTPONED? Spurs issue statement amid UK snow chaos

It’s 22 days into January and goalkeeper Tom King has already given the world the most preposterous goal of the year.

Guinness World Records has confirmed the Newport Town shot-stopper is the new owner of the longest-range goal ever scored in competitive football after his bonkers goal-kick from inside his own six-yard box.

Watch live coverage from every round of 2020/21 EFL Championship with beIN Sports on Kayo. New to Kayo? Get your 14-day free trial & start streaming instantly >

The goal, scored in the 12th minute of the 1-1 draw between Newport and Cheltenham Town, is going viral across the internet

The regulation League Two encounter wouldn’t normally get a look in for media coverage around the world — but that all changed when King, 25, prepared for his goal kick from near his own net.

His strike was boosted by a strong breeze, travelling more than 70m on the fly.

A wicked bounce from near the edge of the penalty box completely bamboozled Cheltenham keeper Joshua Griffiths.

The desperate dive wasn’t enough to stop the ball from bouncing over the goal line to create a moment of madness that has written King into the history books.

The official Guinness World Records website confirmed the new mark, saying: “With his epic downfield kick, King officially broke the record for the longest goal scored in a competitive football (soccer) match, which covered an incredible distance of 96.01m (105 yards).

“Booting the ball from his own six-yard-box, it was picked up by the wind and soared into the net just out of opposition goalkeeper Joshua Griffiths’ reach.”

GOLAZO! Off ground back heel madness

With a bemused smile on his face he simply raised his hands once and went back to business. He said after the game he didn’t want to celebrate because the goal was completely unintentional. He also didn’t want to show any disrespect to Griffiths up the other end.

King was happy to have a laugh about it after the game, however.

“I’m absolutely delighted because it’s not something that I intentionally set out to do,” King said on the club’s website.

“I’m sure it will be talked about for a long time to come, so I’m proud and I’m sure my family will be extremely proud too.

“I’ll have to drop Asmir a message to send my commiserations. It’s different territory for me because I never dreamt of being in the books that you get for Christmas every year.

“Hopefully I might actually read it if I get one for Christmas this year. I’m delighted and hopefully no one beats it for a long time now so I can show my grandkids.

“There was no celebration — I’d never do that to another goalie. I’ve not meant it and I think we have that kind of unwritten rule, that secret goalkeeper’s union that people talk about so I’d never do that.

“I’d never celebrate, but I’m just happy that I could help the team, really.”

He said before the record was ratified he was going to get a tape measure out to see where his goal fits in the history books.

Guinness World Records did it for him and gave him the good news on Thursday (AEDT).

It was some way for King to celebrate his first professional goal.

Liverpool’s 68-game unbeaten home run has ended at the hands of Burnley with Jurgen Klopp declaring they did the “impossible” while one Liverpool legend says the title is “slipping away.”

It has been 438 minutes (7.3 hours) since Sadio Mane fired home a 12th minute goal for the defending champions – the last time the Reds found the back of the net.

Liverpool had 71.9 per cent of possession and 27 shots to Burnley’s six but managed to only place six on target in comparison to their rival’s four in the 1-0 loss.

“We were talking about a blip for Liverpool and Jurgen Klopp has come out and defended his players as you would expect because these players have done so much for Liverpool,” Carragher said on Sky Sports.

“They have just been so poor. You cannot quite believe what has happened to Liverpool in the last few weeks.

“You go from that 7-0 win at Palace to so many players out of form at the same time. It is his job to fix it – whether that is formations, personnel, however they go about it – but there are many teams challenging for that top four it will be a worry for Liverpool until they get out of this little run that they are on.”

You do not need to tell Klopp himself to take responsibility for the team’s woes at the moment.

Speaking to Sky Sports post-game, he declared it was his fault Liverpool lost a game he deemed “impossible” to drop.

“We lost a game which is pretty, actually impossible to lose but we did it,” he said.

“That’s my fault – my job is to make sure my boys have the right feelings, the right amount of confidence, they make the right decisions. But that didn’t work out. We had the ball a lot, we created some situations but in the final moment obviously our decision-making is not right anymore.

“It’s always my fault. The things that don’t work it’s my fault. When things go well, that’s because of the players. If I make clear which movements make absolute sense because it will hurt the opponent and we don’t do them, I have to make it clearer.”

Carragher though suggested the problem went deeper, calling out the playing group as “out of form and confidence.”

“At this moment it looks like the title is slipping away,” he said.

“Six points can still be recovered but the form Liverpool are in and the fixtures they have in the coming months, I think Liverpool fans will be worrying a little more about their top-four position than the title.”

“This is a massive drop off to what we’ve seen the last couple of years. It doesn’t feel as if Liverpool are going to score a goal.

“Delivery wise, Liverpool’s passing in and around the box has been awful.

“Liverpool look like a team out of form and out of confidence.”

Former Liverpool captain Graeme Souness does not buy into the claim that Liverpool are out of the title race, declaring “they are definitely not out of it” and can make up the six-point difference.

“My concern tonight is in midfield, where Thiago, Oxlade-Chamberlain and Wijnaldum start,” he said.

United roar back into top spot

“Normally Liverpool’s midfield has been about intensity, aggressiveness, putting the ball under pressure at every opportunity, giving the opposition no rest and playing the ball in fast to the front three.

“I don’t think we will see that tonight; Thiago is a craftsman and the others are similar.”

While Liverpool seem a shadow of the dominant team that went all the way to the title last season, Klopp does not think it will take much to reverse their fortunes.

“That’s all true [not creating quality chances] but it’s not that we don’t create the chances because the players don’t have the ability to do so it is because our decision-making is the problem,” he said.

“We had the two biggest everyone saw, if we scored in that moment it would have changed a lot but we didn’t and left the game open and lost the game, which I can’t believe but it’s true and we have to accept that.” 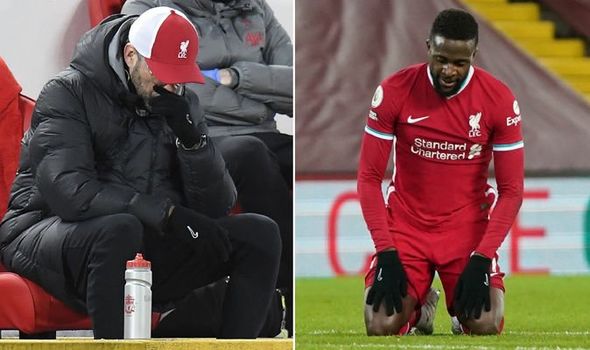 Liverpool’s long unbeaten run at Anfield came to an end against Burnley and it was a night to forget for Divock Origi in particular as the Reds suffered a 1-0 defeat.