UEFA will not introduce Video Assistant Referees (VAR) for next season’s Champions League because of ongoing “confusion” surrounding its use, Aleksander Ceferin, the president of European football’s governing body, said on Monday.

“Nobody knows exactly how it works yet. There is still a lot of confusion,” Ceferin said at UEFA’s Congress in the Slovakian capital Bratislava as he confirmed it would not be introduced for next season’s Champions League.

VAR has been used this season in various club competitions, including the German Bundesliga and Italy’s Serie A.

It looks set to be used at the World Cup in Russia in June and July, with the International Football Association Board (IFAB) set to confirm that decision on March 3.

FIFA president Gianni Infantino recently said he was “confident and positive” about VAR being introduced.

“I am not at all against it, but it needs to be better explained when it is being used. We will see at the World Cup,” added Ceferin.

“It could be a good project, useful for football, but we must not rush to take such decisions.” VAR can only be used for four game-changing situations: after a goal, penalty decisions, after a straight red card or in cases of mistaken identity.

“If I’m honest, I regret that,” said the Bayern boss.

“I’ve found in the Bundesliga that the refereeing decisions that are being made are far more reliable and are fairer than what you’ve often experienced in the past.

“Unfortunately, that’s how things are for now, but I am convinced that eventually the video refs will also enter the Champions League.

“The referees are thereby supported in a positive way. It makes the game better, more reliable and fairer.”

Who expected the Premier League ladder to look like this after five rounds? Not us.

Everton on top, unbeaten from their five games. Villa with four league wins from four for the first time since 1930, including that remarkable 7-2 demolition of the reigning champions.

It’s early days, and (almost) no-one is predicting these two will still occupy the top billing at the end of the 38th round. But this start to the season has been extraordinary.

Here’s how two underdogs stunned the best league in the world.

‘$1.1m a week for that?’: Bale misses huge chance in Spurs homecoming

When Carlo Ancelotti was announced as Everton’s manager on December 21, 2019, the Toffees had only just climbed back out of the relegation zone under interim boss Duncan Ferguson. They had 19 points from 18 games. By the time they ended the season, they had 49 points (38 games).

By then, it was clear the three-time Champions League winner had made clear improvements to his team’s fortunes. Part of that can be ascribed the standard ‘new manager bounce’ – he opened with just one loss from his first league eight matches – but few would deny the influence he’s had on the blue half of Merseyside.

Crucially, he was then backed by the club’s owners in the transfer market. Ancelotti did not fork out on one superstar player, but spread the tens of millions of pounds he was handed across a number of arrivals. Brazilian Allan and Frenchman Abdoulaye Doucoure in the midfield. Talented English youngster Ben Godfrey in defence.

Alone, none of those would have stolen the headlines. Together, they might just guide Everton to Champions League football.

The biggest arrival of the bunch was James Rodriguez, the Colombian star of the 2014 World Cup who fell out of favour at Real Madrid and opted to reunite with his favourite coach for the third time in his career. It’s hard to imagine the immensely popular player landing in Liverpool – or Goodison Park, at least – without Ancelotti at the helm.

Then there was the key role-change for Dominic Calvert-Lewin, who Ancelotti quickly pushed further forward and centrally into something more akin to a traditional poacher’s role. Instead of roaming the park (particularly down the right flank) and dropping deep in search of the ball, the English forward now has the opportunity to wait for the ball to come to him – then clinically buries it in the net.

He is Everton’s fastest runner and makes more sprints than almost any other player on the park in nearly every game. That hasn’t changed. Neither has his physicality and aerial prowess. But with James Rodriguez pinging long ball after long ball behind the line for him to collect, and with plenty of crosses coming his way once he gets into advanced positions inside the box, the number of chances – and goals – have skyrocketed.

Bale back but Spurs collapse

It’s a game plan that has benefited immensely from the improved attacking creativity and greater control in the middle of the park afforded by Everton’s new-look midfield. Just look at how it played out against Liverpool: one raking James long ball found Calvert-Lewin behind the Liverpool lines. It led to a corner, which led to a Michael Keane goal. Calvert-Lewin (now valued at $65 million AUD according to transfermarkt.co.uk) got his own goal with a increasingly-trademark header off an Olympic high jump-esque leap.

The results speak for themselves: Calvert-Lewin now has seven goals in five league games, becoming the first Everton player to score in each of the club’s first five league games since Tommy Lawton in 1938-1939.

This is not to diminish the issues facing the Toffees. James doesn’t like to track back, something Liverpool exploited for much of the first half. Key figure Richarlison will miss three games for his shocking tackle late in the Merseyside Derby. Jordan Pickford still seems an unsafe pair of hands between the sticks.

But this team has already proved they can challenge the champions across 90 minutes, and made a statement that they aren’t happy to be known as just the ‘other’ team in Liverpool.

From relegation battlers to 90-year-first

Everton finished last season in 12th, so their rise to the top this campaign is highly impressive. Even more staggering is Villa, who were inches away from relegation last season only for captain Jack Grealish to rescue them on the final day.

Whereas last off-season Villa splashed the cash on a whole raft of new players, overhauling almost their entire squad upon their promotion to the top flight, this year it’s been about quality over quantity.

Chelsea loanee Ross Barkley was the decisive man in Villa’s 1-0 win over Leicester, belting a rocket in the dying minutes to make it two goals for him in two Premier League appearances for the Villains.

At 26, the 33-cap England midfielder is in his prime and desperate to perform in order to earn himself a spot on the plane for the 2021 Euro Championships.

“Capturing a player of Ross’s quality is a real coup for our club and I am certain he will thrive here and improve our team,” coach Dean Smith said after his arrival.

Other big signings have made an immediate impact: Ollie Watkins (three goals and an assist), Emiliano Martínez and Matty Cash are all significant first-team improvements, while Bertrand Traoré has shown flashes of brilliance and looks a solid long-term prospect.

Dean Smith’s reorganisation of his previously leaky defence has also proved crucial to their rise. Martinez in goals and Cash at right back have strengthened the backline, but so has Ezri Konsa at the heart of defence.

The versatile youngster spent extended stints last season at centre-back and at right-back. But things changed when Konsa returned to the central defensive role for the final four PL games of last campaign. Villa went unbeaten, conceding just twice. The role change was one of the main factors in their survival, and Konsa’s fine form has continued on to the new campaign.

Four more games unbeaten takes the overall record since the change to eight games, six wins and two draws, with just four goals conceded (and two of those were Mohammed Salah!).

Then there’s Jack Grealish. The talismanic captain at times last season looked grimly determined to keep his childhood club in the top flight, even if it meant he had to carry the hopes of the entire club on his shoulders.

Once again, most expected him to leave in the off-season when the heavyweight clubs came knocking. He stayed, and has been reaping the rewards. If nothing else, he looks like he’s loving his football. Villa fans will be too.

Heavyweights off to sluggish start

Part of the reason the top of the table reads as it does is undoubtedly down to their rivals’ slow starts. Last season Liverpool kicked off with five wins from five. The season before Liverpool and Chelsea both were perfect after five rounds – Everton’s 13 points from five rounds would’ve put them third alongside Manchester City. In 2017-18, both City and United had 13 points from their first five matches.

This season, Liverpool were humbled by Villa. Tottenham demolished Man United, but coughed up a three-goal lead in the last ten minutes against West Ham. It’s a similar story across all of the top teams: inconsistency, mistakes, and defensive sloppiness have cost them time and again.

As Ole Gunnar Solskjaer said after their 4-1 win over Newcastle this weekend: “The season started for us today.

“We have come up to the speed of the game and that showed.”

It didn’t take Everton or Aston Villa four games to ‘come up to speed’. They’ve been zipping along at pace – at Dominic Calvert-Lewin’s awesome pace – since day one.

The pressure is firmly on the heavyweights to catch up.

A French second division player on Sunday denied he had bitten the cheek of the opposition goalkeeper and says he suffered racist taunts.

Sochaux’s Senegalese midfielder Ousseynou Thioune, accused by Valenciennes keeper Jerome Prior of sinking his teeth into his cheek after Saturday’s goalless draw, said Prior had made comments about his skin colour during the match.

‘$1.1m a week for that?’: Bale misses huge chance in Spurs homecoming

Thioune said that as they walked off following the game a scuffle broke out as he complained to Prior about his alleged racist language. He claimed the goalkeeper repeated the insult.

“On that second occasion, I said to him ‘let’s go outside and we’ll sort this out’. It’s true that I put my head against his cheek and yes, I was angry, I wanted to headbutt him,” Thioune told L’Est Republicain newspaper.

“But when I thought about it, I withdrew. There was no bite,” Thioune said.

Valenciennes president Eddy Zdziech told AFP he had no doubt that Thioune had bitten his player.

“It is really regrettable. We mustn’t play it down or deny it. I have spoken to Jerome and he has a really big bite on his cheek. He was bleeding.

“This sort of behaviour is serious and it must be eradicated.”

According to So Foot, Prior said: “There are pictures. The league and justice will do their job. I have no comment to make.”

If the claims of either player are proven, both could face disciplinary action from the French league.

What channel is Leeds vs Wolves on? TV, live stream, kick off for Premier League game 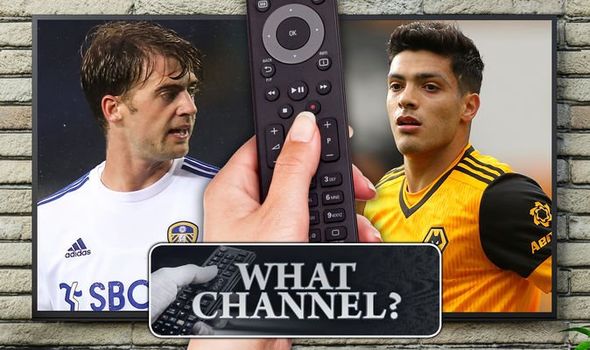 Leeds host Wolves in the Premier League on Monday but what channel is the match on? Express Sport is on hand with all the details, including TV coverage, live stream and kick-off time.

Australians at the IPL – Steven Smith back in the groove, David Warner’s Super Over frustration and Pat Cummins’ runs