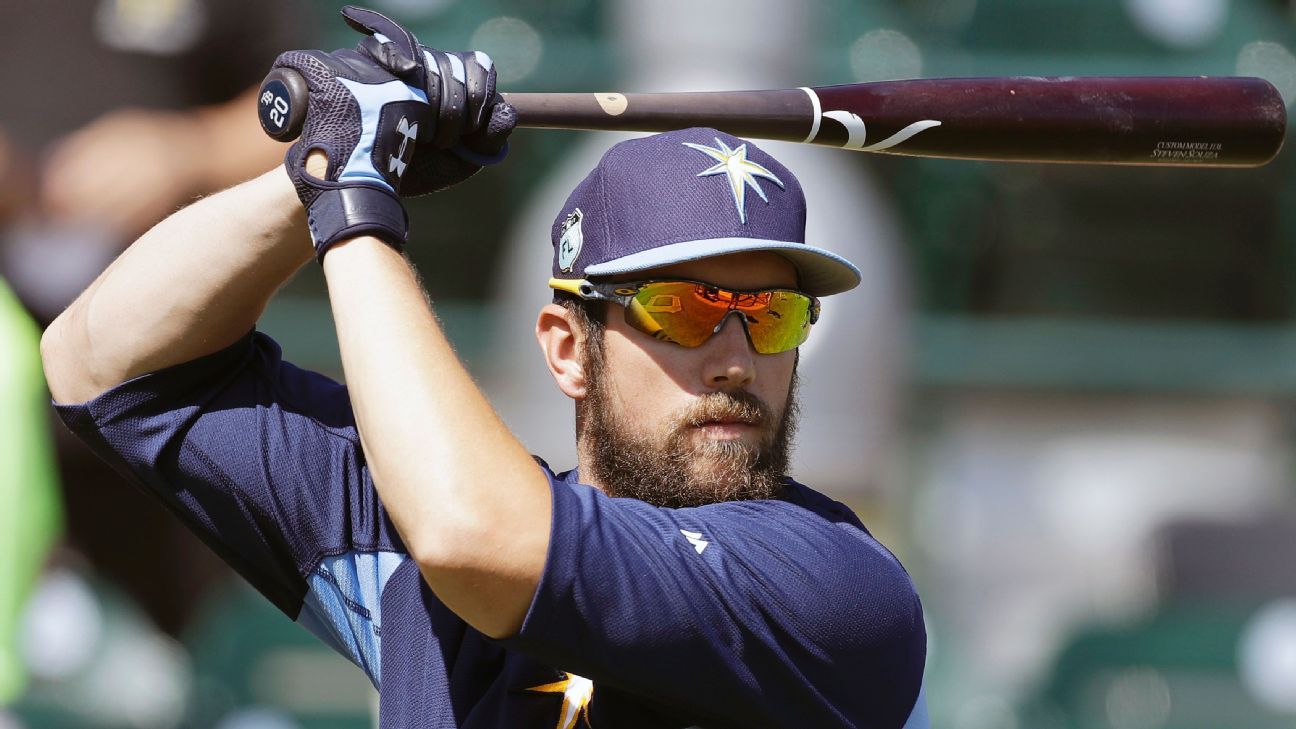 SCOTTSDALE, Ariz. — Surprised to be traded, Steven Souza Jr. heads to Arizona for what promises to be a key role on a Diamondbacks team that expects to be good.

The 28-year-old outfielder knew the Tampa Bay Rays were making some big changes but felt assured by management that he still figured in their plans.

“As much as people were flying off the shelf, it seemed like I was not going to be one of those people,” Souza said Wednesday in a conference call from the airport before boarding a plane to Arizona. “It definitely caught me off-guard a little bit. I was definitely preparing for the role that I had there.”

Souza came to the Diamondbacks on Tuesday in a three-team trade that sent infielder Brandon Drury from Arizona to the New York Yankees and left-hander Anthony Banda, a top Arizona pitching prospect, to Tampa Bay.

He will wear the same No. 28 that J.D. Martinez wore in his torrid half-season in the desert a year ago. Martinez signed a five-year, $110 million deal with the Boston Red Sox this week.

Nobody expects Souza to approach the numbers Martinez put up with Arizona — 29 homers and 65 RBIs in 62 games.

He will, most likely, be playing the same position as Martinez and be the batter to provide some protection for Paul Goldschmidt in the lineup.

“We haven’t sat down with him to finalize the exact thoughts, but this is an impact bat,” Diamondbacks manager Torey Lovullo said. “He’s going to play as much as he possibly can. … We haven’t finalized exactly what’s going to happen, but if you want me to speculate right now, he’s going to play just about every day and play right field.”

That would mean David Peralta would be in left field and A.J. Pollock in center.

Speedy Jarrod Dyson, who finalized a two-year, $7.5 million contract Monday, will be “more than a fourth outfielder,” Lovullo said.

“There’s a lot of guys I know, and great dudes actually,” Souza said.

Souza said he met Goldschmidt through a mutual friend and the two took part in a leadership retreat, going hunting together.

“Man, we connected right away,” Souza said. “His personality and mine kind of match up, the way we think. What an amazing man he is.”

Lovullo wouldn’t say what would be done at second base with Drury gone to the Yankees. The Diamondbacks still have plenty of middle infield help.

One possibility would be to shift Ketel Marte from shortstop to second. Ahmed would mostly play at short with Chris Owings filling in all over the infield as well as in the outfield. Daniel Descalso also can play just about anywhere.

Marte said he would not object to the switch.

“He was still a young player that was finding his way, but he seemed to improve every time we saw him,” Lovullo said. “The athletic ability, the ability to hit for power, the defensive ability — it was obvious to the opposing dugout that he was an exciting player.”

Souza credited his improvement last season to a number of factors, including his work with Tampa Bay’s coaches and “settling in and trusting my ability more and more.”

The Milwaukee Brewers added another infielder to their roster on Wednesday, trading with the Arizona Diamondbacks for veteran Eduardo Escobar.

Escobar, 32, has 22 home runs for the last-place Diamondbacks. He can play any infield position, and is likely to see time at third and first base. The Brewers have Willy Adames and Kolten Wong playing shortstop and second base, respectively.

The switch-hitting Escobar has a career .778 OPS in 11 seasons, the past four with Arizona. It’s the third in-season trade to net the Brewers an infielder, as they previously acquired Adames from the Tampa Bay Rays and first baseman Rowdy Tellez from the Toronto Blue Jays.

Milwaukee is sending back prospects Cooper Hummel and Alberto Ciprian to complete the deal.

Ciprian, 18, signed as an undrafted free agent with Milwaukee in 2019 and is playing in the Dominican Summer League, averaging .378 while adding eight RBIs in his first 12 professional games.

Escobar was highly sought-after, with the Chicago White Sox also interested in his services, but Milwaukee has just as big a need for him. The Brewers rank last in batting in the National League, hitting 21 points lower as a team than Escobar’s .246 batting average.

The deal is pending a medical review.

It wasn’t immediately known who New York was sending to Texas to complete the deal.

Gallo was a late scratch from the Rangers’ lineup ahead of Wednesday night’s game against the Diamondbacks, with speculation that a trade was in the works.

That proved to be the case, with the Yankees swooping in and acquiring arguably the fiercest left-handed bat on the trade market to go with fellow sluggers Giancarlo Stanton and Aaron Judge.

He’s spent all seven of his major league seasons in Texas, but the Rangers — an AL West-worst 36-65 entering Wednesday — have been in sell mode, with Gallo their prized piece.

A two-time All-Star, the 27-year-old slugger ranks sixth in the AL this season with 25 home runs, to go with 55 RBIs and a .223 average. He had struggled mightily at the plate since the All-Star break, with zero home runs and a .067 average in the 10 games following, before breaking out Tuesday with a three-run shot against the Diamondbacks.

Gallo is also under team control through 2022. 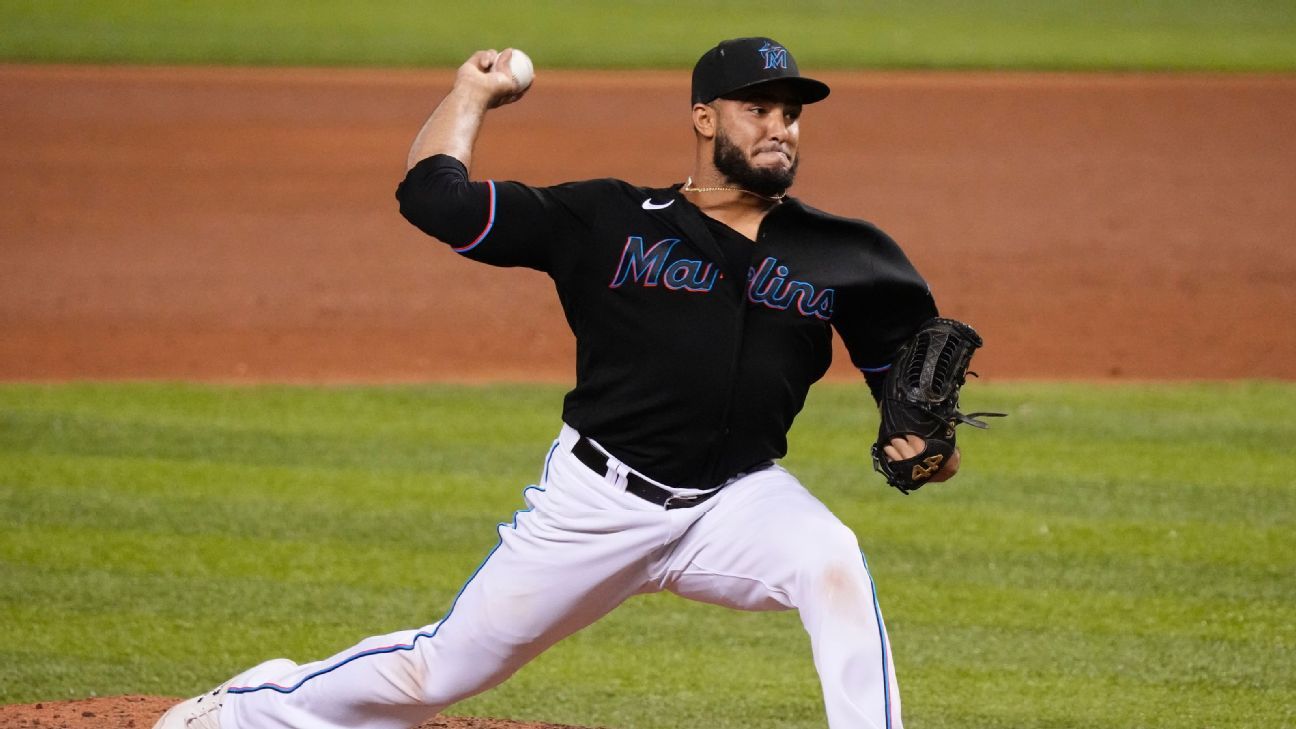 The Houston Astros continued to fortify their bullpen before the trade deadline, acquiring right-hander Yimi Garcia from the Miami Marlins on Wednesday for two players.

In exchange for Garcia, the Astros sent outfielder Bryan De La Cruz and right-hander Austin Pruitt to the Marlins.

It’s the second straight day the AL West-leading Astros have swung a trade to add bullpen help. On Tuesday, Houston acquired Kendall Graveman and Rafael Montero from the Mariners.

This is the second trade made Wednesday by the last-place Marlins, who earlier dealt center fielder Starling Marte to the Oakland Athletics.