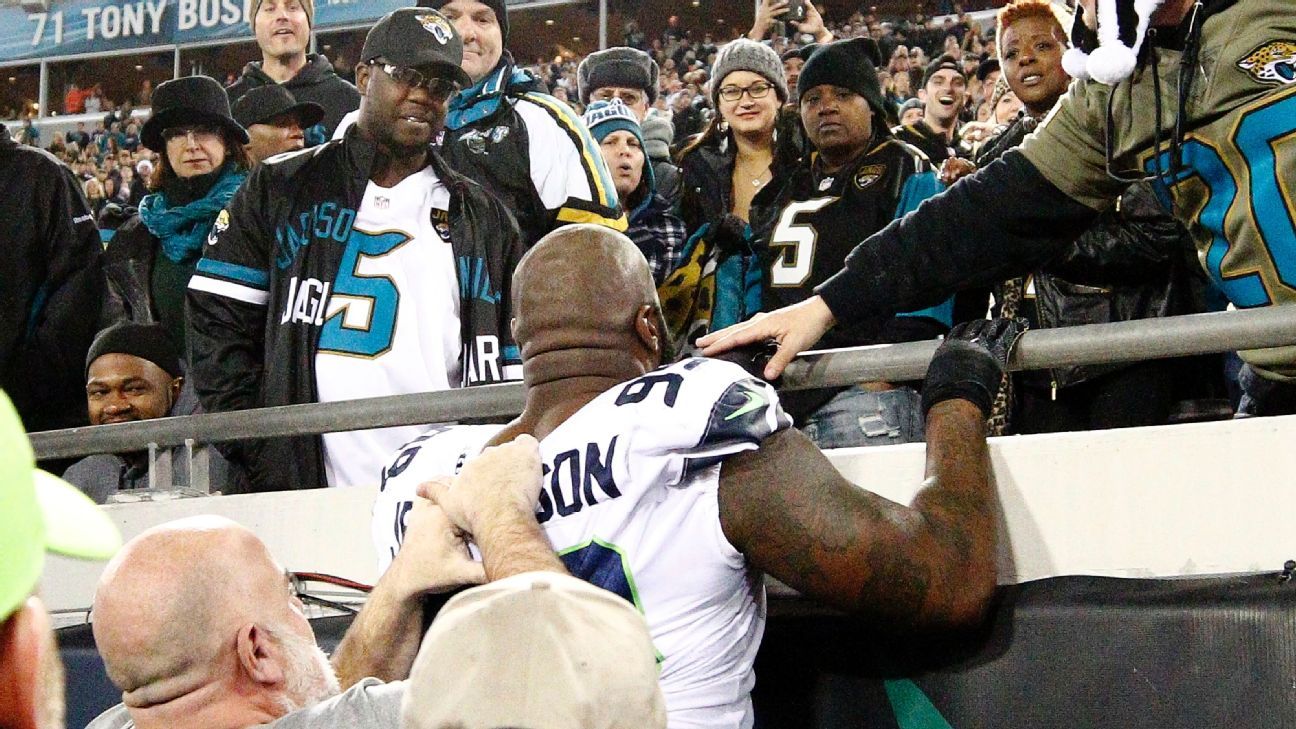 The Jacksonville Jaguars have indefinitely banned two fans they have positively identified among the four people the team says threw debris at Seattle Seahawks defensive lineman Quinton Jefferson during a Dec. 10 game at EverBank Field. Jefferson was restrained after attempting to climb into the stands to confront the fans.

The Jaguars conducted what they called a “thorough examination of the incident” in conjunction with the Jacksonville Sherriff’s Office, NFL Security, the team’s stadium management company and the stadium’s security service. The team shared the report’s conclusions with The Florida Times-Union.

“It was concluded that four individuals threw objects onto the field,” the report stated. “Based on available video evidence, we were able to positively identify two of these individuals. All four individuals had relocated to a seat near the field wall toward the end of the game.”

The Times-Union reports that neither of the banned fans was an existing season-ticket holder.

“These two individuals have since received notice that due to the severity of the violation of the Fan Code of Conduct, they are banned indefinitely,” the team said in its statement.

Jefferson attempted to climb into the stands after fans had thrown drinks at him as he was leaving the field following his ejection in the closing seconds of Seattle’s 30-24 loss to the Jaguars.

The sideline incident occurred during an ugly ending to the game as Seahawks defensive linemen continued to fire off the ball as Jacksonville was in a victory formation, leading to scuffles on consecutive plays.

Jefferson was heading toward the tunnel after the ejection when the first drink was thrown at him from the stands. He stopped and made his way back toward where the drink was thrown from and exchanged words with a fan as Seahawks sideline personnel held him back. When another drink nearly hit Jefferson’s head, he broke free and bolted toward the stands, attempting to climb the railing before he was pulled down and escorted away.

While Jefferson was fined $9,115 for the unnecessary roughness penalty that got him ejected, he was not punished by the league for attempting to enter the stands. According to a report by ESPN’s Kevin Seifert, the NFL does not have a rule that explicitly prohibits players from entering the stands before, during or after a game. Any penalty would have fallen under the league’s rules regarding sportsmanship and unsportsmanlike conduct.

Seahawks coach Pete Carroll said Jefferson should have handled the situation differently and said it could serve as a learning experience for Jefferson and other young players.

Information from ESPN’s Brady Henderson was used in this report.