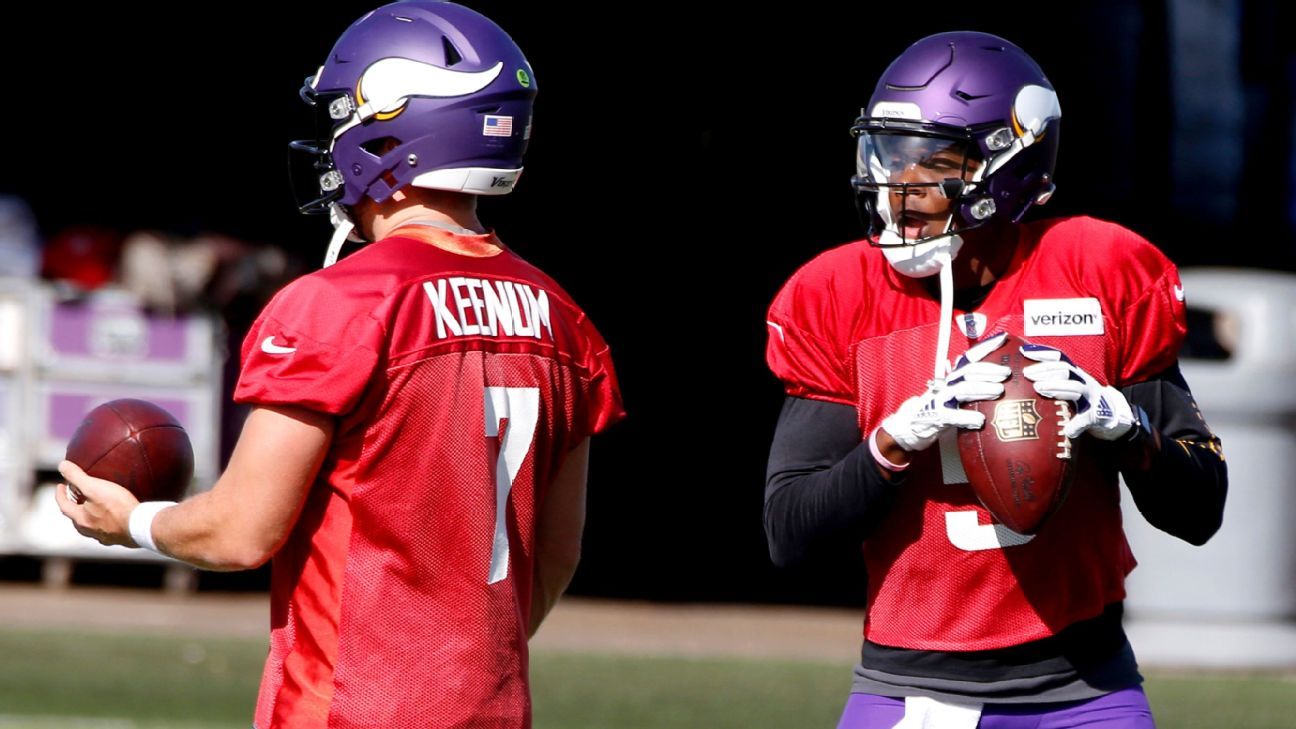 The NFL offseason is already heating up — we’ve had two big trades, and Blake Bortles has been taken off the quarterback market — but March 14 is when the real fun begins. That’s when free agency kicks off (4 p.m. ET), and it’s when the trades involving Alex Smith and Marcus Peters become official.

Over the next two weeks, our panel of ESPN NFL Insiders is taking a closer look at the upcoming free-agent market, answering questions on the biggest topics in the league.

We’re starting Monday with a deeper look at the Vikings, whose top three quarterbacks from 2017 — Case Keenum, Teddy Bridgewater and Sam Bradford — are all free agents. Minnesota also might be in the Kirk Cousins sweepstakes.

Which quarterback will take the most snaps for Minnesota in 2018?

Mike Sando, senior NFL writer: Keenum. We’ll have to see whether Bridgewater can make it through a full offseason, training camp and preseason and win the job. Once he does those things, he will have to do what might be the hardest thing for him to do, which is play the most snaps. So, while I think Bridgewater could be the most likely quarterback to re-sign with Minnesota, I’ll lean toward Keenum as more likely to play the most snaps, at least until we have more information.

Courtney Cronin, ESPN Vikings reporter: Bridgewater. I predict the Vikings will end up getting outbid in the Cousins sweepstakes, thus leading them to re-sign two of their pending free-agent quarterbacks. Though Minnesota might franchise tag Keenum, it would make sense to use its cap space to work out deals with Keenum and Bridgewater. The Vikings typically don’t have quarterback competitions in training camp, but given the unique nature of their situation, both Bridgewater and Keenum will have a chance to duke it out in camp. It might not be in the beginning of the season, but by some point in 2018, I believe Bridgewater will emerge as the starter.

Matt Bowen, NFL writer: Bridgewater. I expect the Vikings to explore the market for Cousins. But with the Jets, Broncos and possibly more teams jumping into the mix, the price tag is going to rise quickly. That’s why I’m looking at a situation in which coach Mike Zimmer & Co. attempt to bring back both Bridgewater and Keenum. With Bridgewater healthy and prepped to go through the entire offseason program, the former first-round pick will edge out Keenum in a daily camp battle for the starting spot.

Kevin Seifert, national NFL writer: Keenum. Part of the Vikings’ public ambivalence could be related to leverage. Declaring a quarterback your guy means you have to pay him that way. There is no doubt that Zimmer loves Bridgewater, but the Vikings know how rarely in their history they have gotten a performance like the one Keenum gave them in 2017. We have no information at the moment that would allow us to project Bridgewater as the superior quarterback.

Field Yates, NFL Insider: Cousins. The Vikings were publicly reticent throughout much of the 2017 regular season to fully and entirely commit to Keenum as the guy, which suggests to me that the team won’t overextend to keep him. Cousins, meanwhile, is the rare available quarterback who can shift the winds of a franchise, helping Minnesota — armed with the financial resources to acquire him — elevate to another level.

Mina Kimes, senior writer: Bridgewater. The Vikings have enough cap space to make a run at Cousins, but I think they’ll back off when his price tag reaches uncharted territory; Cousins is better than Keenum and Bridgewater, but he’s not that much better. It’s hard to forecast when Bridgewater will take Keenum’s job (I expect the team to keep both quarterbacks), but I still think Bridgewater is Minnesota’s long-term plan.

Dan Graziano, national NFL writer: Bridgewater. My projected scenario is one in which the Vikings bring back Keenum and Bridgewater, and Bridgewater eventually takes the job away from Keenum — either in a training camp competition or after Keenum struggles during the regular season. All of this, of course, assumes the Vikings don’t sign Cousins. If they break the bank for a quarterback, I’d change my answer to Cousins.

Aaron Schatz, editor-in-chief of Football Outsiders: Keenum. My guess is that other teams will look at Keenum and say, “Yes, he had one fantastic year, but what is his regression going to look like in our system?” The Vikings are the one team that can look at Keenum and know they have seen evidence he can play well for them. In the same system with the same teammates, there’s a better chance he can continue to play at 2017’s high level.