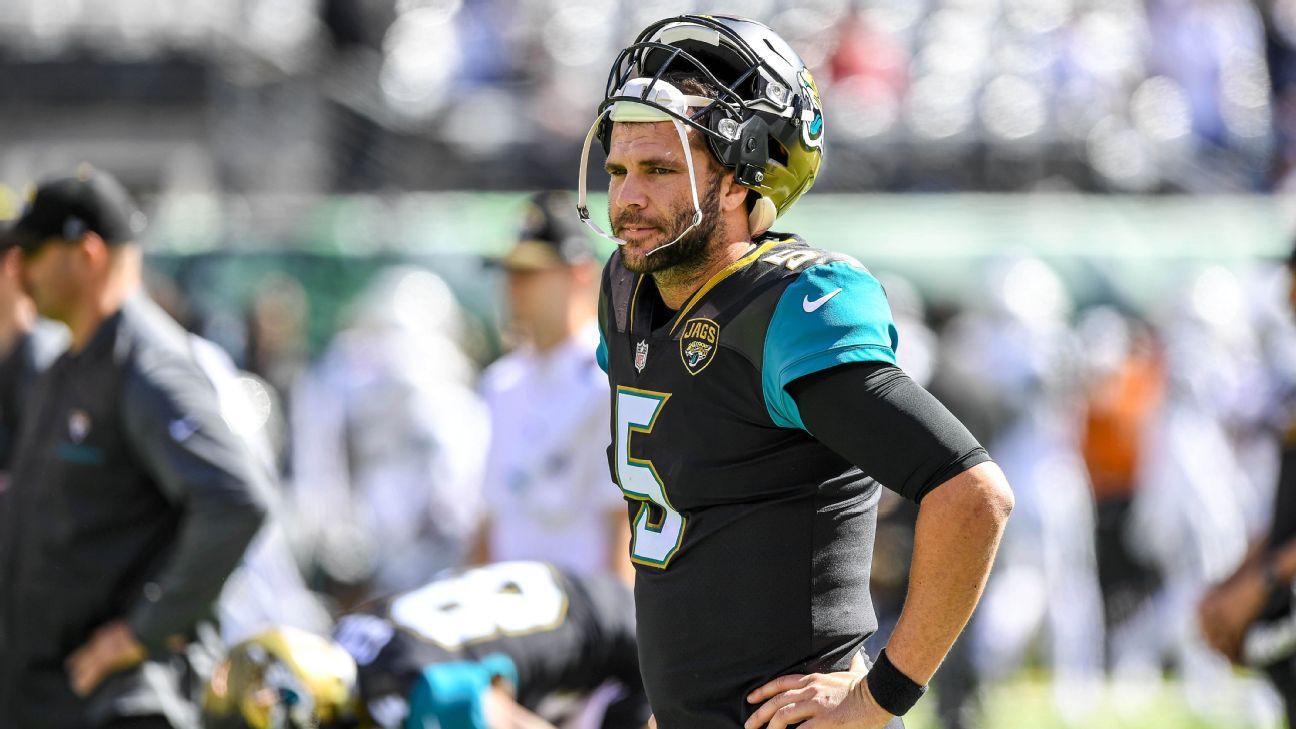 JACKSONVILLE, Fla. — Now that the Jacksonville Jaguars have decided they’re rolling with Blake Bortles, they need to get him some help.

The Jaguars were so close to reaching the Super Bowl — they held a 10-point, fourth-quarter lead before losing to New England in the AFC Championship Game. To remain a legitimate contender over the next several seasons, the team needs to add a game-changing receiver, find a pass-catching tight end and address the interior of the offensive line.

It’s not an overwhelming task, either. The receiver is already in house, and it’s a good draft for tight ends and offensive linemen. Executive VP of football operations Tom Coughlin and general manager Dave Caldwell can make the Jaguars the favorite in the AFC with two draft picks.

The first priority is re-signing receiver Allen Robinson, who missed nearly all of the 2017 season because of a torn left ACL. His rookie contract expires on March 14, and the Jaguars can work out a reasonable, long-term deal or get him to agree to a one-year, incentive-laden deal similar to the one Alshon Jeffery signed with Philadelphia last offseason.

If neither works, the team can use the franchise tag. The projected salary for that is about $16 million, and while that’s a little high for a player who has missed 17 games in four seasons, the Jaguars can easily afford it now that the team won’t have to pay Bortles the $19.053 million he was due under his fifth-year option.

Robinson is expected to be cleared with no restrictions by training camp, and bringing him back gives Bortles the explosive downfield playmaker the offense didn’t have last season. Robinson led the NFL in catches of 20 or more yards in 2015 (31), but he and Bortles both struggled in 2016 (just 11 catches of 20 or more yards on the same number of targets). However, he had a fantastic camp last year, and the Jaguars believed he was headed for a big season before his injury.

The Jaguars also need a pass-catching tight end to complement Marcedes Lewis, who will be in his 13th season with the team and is more of a blocker than receiver. Jaguars tight ends caught an NFL-low 43 passes and were targeted the third-fewest times last season.

Jimmy Graham is a player the team could target in free agency, but the tight end draft class is also good. Hayden Hurst, Mark Andrews and Dallas Goedert are players who have been linked to the Jaguars with the 29th pick in various mock drafts. All three are move tight ends who can make plays in the seam and create matchup issues with smaller defensive backs when lined up outside.

The Jaguars also have to get better along the interior of the offensive line. The Jaguars finished the regular season as the NFL’s top rushing team (141.4 yards per game), but their production dropped off significantly over the final six games. The Jaguars averaged 51.3 fewer yards rushing per game in Weeks 12-17 than they did in the first 11 weeks.

Right guard A.J. Cann was up and down, and left guard Patrick Omameh is an average player, so addressing one or both guard spots in free agency or high in the draft is a must. Josh Sitton, Andrew Norwell and Justin Pugh are veterans worth investigating, but they might cost more than the Jaguars are willing to pay.

It’s unlikely the Jaguars would address guard with their first pick in the draft, but using a second- or third-round pick could net them an immediate starter who will help the front be more consistent in the run game.

That the Jaguars are sticking with Bortles is a sign management believes in his ability to get them to the Super Bowl. Adding those additional pieces on offense to complement one of the NFL’s best defenses makes it a stronger possibility.

Tom Brady can’t get enough of showing off his hands laden with Super Bowl rings. It’s almost an annual rite of summer. He wins a Super Bowl in February. His team gets its rings sometime in the summer before training camp and Brady shows them off.

The Tampa Bay Buccaneers got their Super Bowl rings on Thursday. They feature 319 diamonds, which include 15 karats of white diamonds and 14 karats of yellow diamonds, reflect the Super Bowl’s 31-9 final score. The twist-off removable top is a first of any Super Bowl ring. On the bottom of the removable top, laser-etched in gold, is the word “HISTORIC,” to commemorate the accomplishment.

“We wanted it to represent the camaraderie and sacrifice that our players and coaches experienced along the way,” co-owner Darcie Glazer-Kassewitz said Thursday. “This ring tells the story of that journey, it reflects the heart and soul of a team like none other before it. We know it will be an emotional touchstone for everyone involved for many, many years to come.”

Brady took to Twitter Friday for a classic “How it started vs. How it’s going.” Showing off the six rings he won with the New England Patriots and his newest bauble, it’s safe to say, as it usually is for TB12, that things are going just fine.

How it started vs How it’s going pic.twitter.com/wbzeQNgjnX 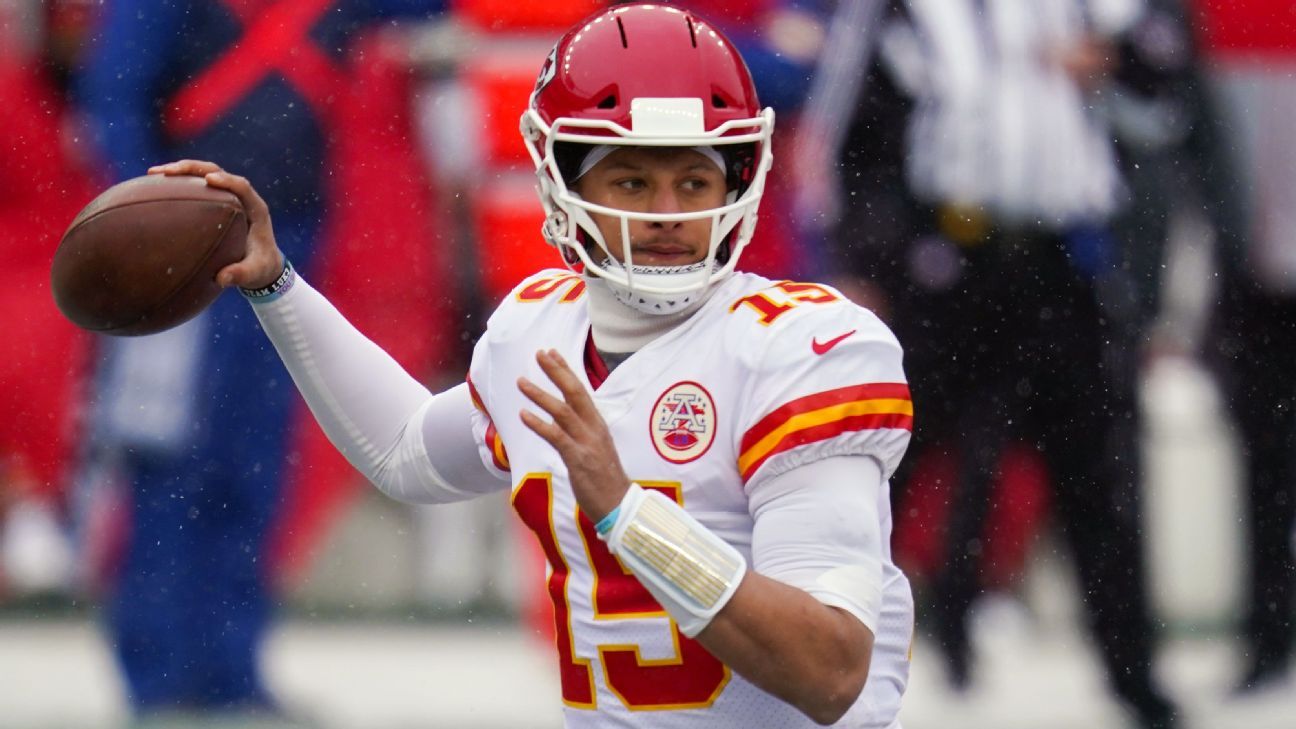 KANSAS CITY, Mo. — Patrick Mahomes said he would have no physical limitations at Kansas City Chiefs training camp, which begins on Saturday for him with the start of a three-day camp for quarterbacks and rookies.

“I’ve been training, running, throwing, doing everything that I usually do,” said Mahomes, who had surgery for turf toe in February shortly after the Chiefs’ Super Bowl LV loss to the Tampa Bay Buccaneers. “That’s what was so good about [offseason practice] and doing those things is that I tested it there and realized I was good, Then when I got back with [personal trainer Bobby Stroupe at his offseason home in Texas] I was able to do what I normally would do.”

The Chiefs initially hoped after the surgery that Mahomes would be able to participate for the final few days of offseason work. But Mahomes was ahead of schedule and a full participant for the entire four weeks of practice.

Mahomes said he and Stroupe worked on the surgically repaired toe during recent workouts.

“We definitely did a little bit more as far as mobility with the foot,” Mahomes said. “We always do stuff with the foot and ankle and knee but we did different stuff just to kind of keep that mobility going, strengthening that [area] that I kind of lost. Whenever you go in and have any surgery you’re going to lose some mobility.”

Most of the Chiefs veterans will report to camp at Missouri Western State University in St. Joseph on Monday with practice beginning on Wednesday. Coach Andy Reid said defensive end Frank Clark would report on time and participate in practice.

Clark was recently charged in Los Angeles with felony weapons possession after a March arrest. Clark was also arrested in Los Angeles in June in a separate incident in which police allegedly saw a submachine gun in his car but that incident remains under investigation. 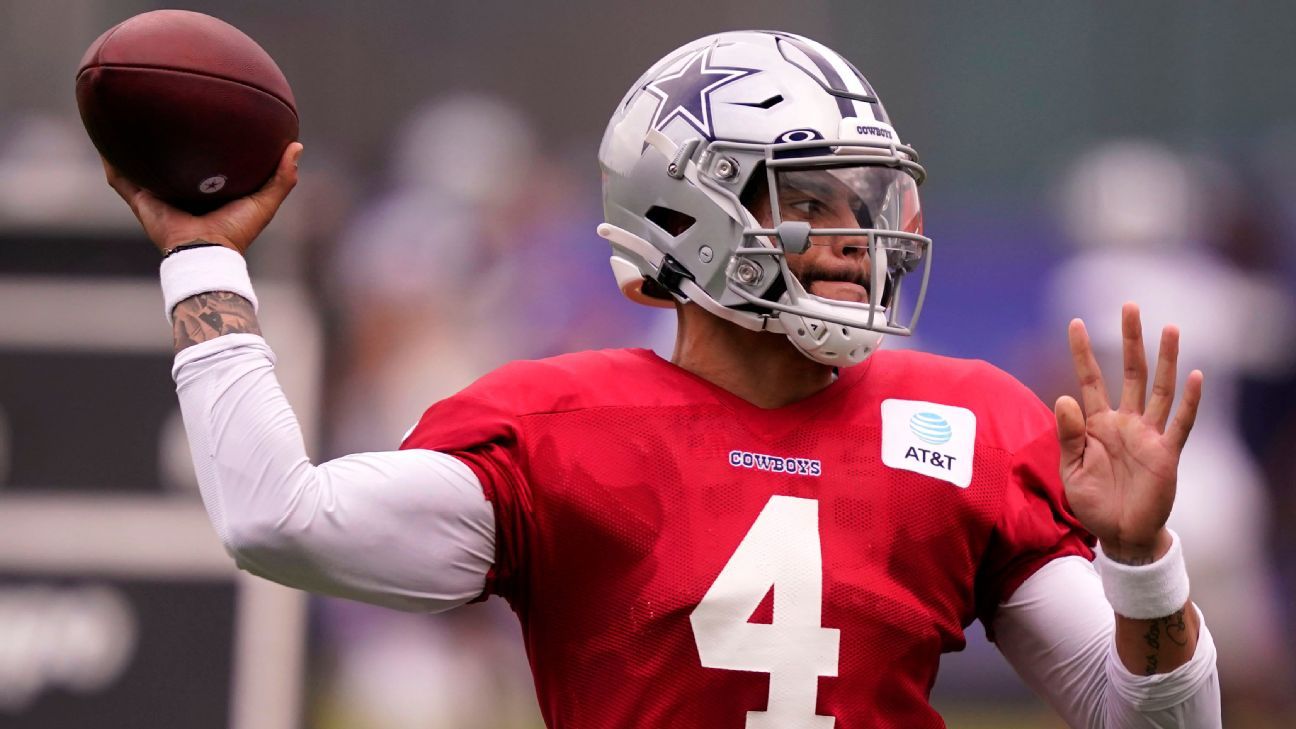 OXNARD, Calif. — Dallas Cowboys quarterback Dak Prescott keeps checking off the boxes in his return from a compound fracture and dislocation of his right ankle he suffered last October. On Thursday, he went through his first full practice, including 11-on-11 drills.

“There was no part of practice that I thought about my ankle, thought about any physical thing holding me back, to be honest with you,” Prescott said.

Next month, he will play in the preseason, although maybe not the Hall of Fame Game on Aug. 5 against the Pittsburgh Steelers.

“I definitely want to play. As far as giving you a number or quantity of how much I need to, I just want to obviously get back out there and get some reps before it’s real,” Prescott said. “Just to have a live defense coming at me, hopefully not take too many licks because I have great protection, but that’s part of the game, and I think it would obviously be great to get up from that, wipe it off and be just another process of burying the injury. I think it will be huge.”

“What a special way to start this season off, not only for us but for this league, for fans: America’s Team playing obviously the reigning Super Bowl champions with the best quarterback to do it,” Prescott said. “I’m excited for them. I’m excited for the matchup against this defense, a very talented defense. I know our defense is very excited for that matchup against Tom and his guys. It’s going to be special, not only for us in Cowboys nation but for this NFL. It will be a great way to kick off the season and kick off our season the right way.”

Before he gets to that point, Prescott understands the work that needs to be done while the Cowboys are in Oxnard for training camp.

During the organized team activities and minicamp during the offseason, Prescott took part in every aspect of practice except team drills. McCarthy said Prescott made a “strong first impression,” during the first practice in which he completed 11 of 16 passes during team drills.

“He looks no different today than my experience with him in live training camp action last year. That’s the consistent comparable I think for everybody that’s been involved with his rehab,” McCarthy said. “As we go into padded practices, I think clearly that will be a threshold that he’ll get over, particularly with the bodies around him as we get into the team work. I watched him closely in the team work live (Thursday) by design. He didn’t flinch. It looked like he never left. So that’s a good point.”

Prescott has big expectations for the Cowboys’ offense that will not only have him healthy, but offensive linemen Tyron Smith, La’el Collins and Zack Martin, who combined to miss 36 games. Tight end Blake Jarwin suffered a season-ending knee injury in the first game and is now 100%.

Wide receiver Amari Cooper is still working through offseason ankle surgery, but the Cowboys’ trio of Cooper, Michael Gallup and CeeDee Lamb is considered among the best. And Prescott said, “I expect to see the best Zeke we’ve ever seen in the NFL,” when talking about Ezekiel Elliott.

“Stats, scoring, whatever you want to say, we want to be the best offense and we want to make sure we’re playing complementary football first and foremost with our defense and with our special teams,” Prescott said. “It’s just not about getting out there and throwing it 100 times. But it’s about playing complementary football, the run game, the pass game, the action game, and allowing the defense to get rest. Giving the defense a chance to get out there and to be their best when they’re out there as well. First and foremost, just be the best offense in the NFL.”