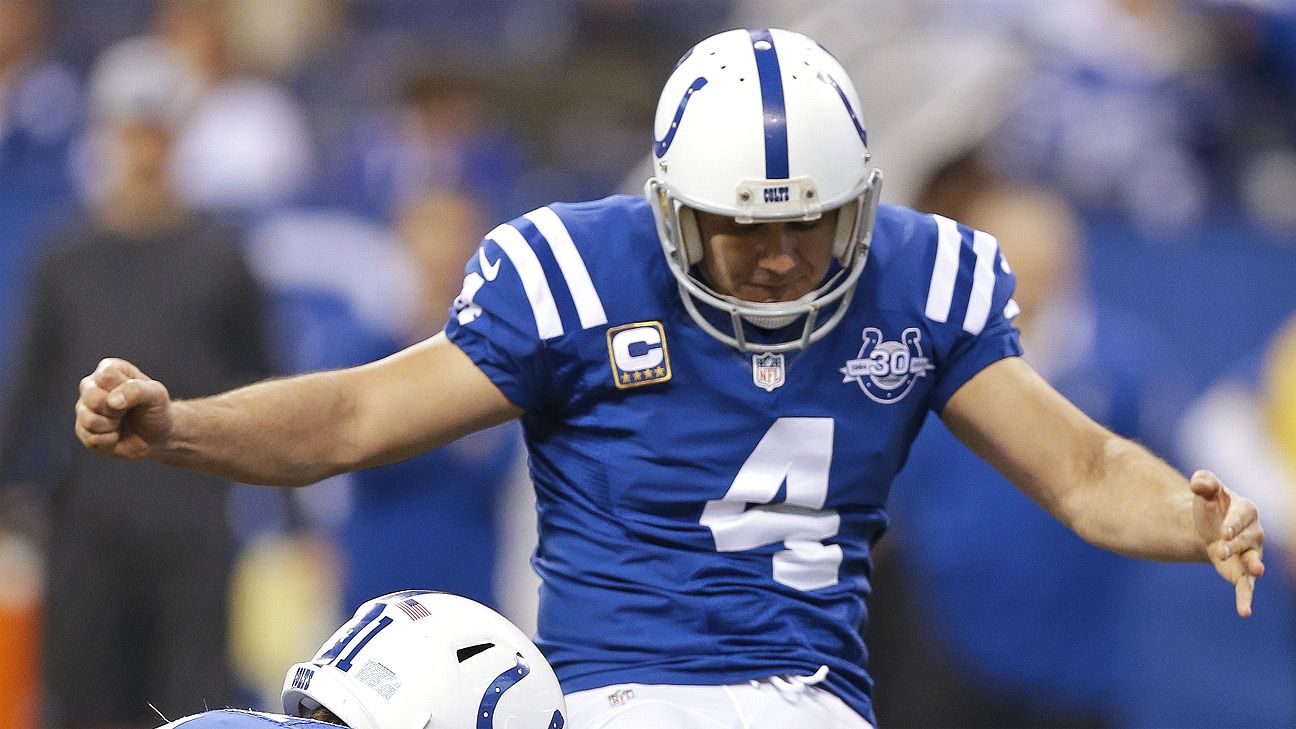 INDIANAPOLIS — Adam Vinatieri, who signed a one-year deal to the return to the Colts on Thursday, will be 46 years old when he completes the 2018 season, which will be his 23rd in the NFL.

The one-year deal isn’t an indication that the place-kicker plans to retire at the end of next season. If all goes well, Vinatieri is leaving the door open to signing another contract at this time next year.

“If I can stay healthy and be productive, I can anticipate catching up to Morten [Andersen] midseason and at the end of the year I’ll be 46,” Vinatieri said. “I’m not putting anything out of reach. I’m not looking and saying, ‘No way.’ I just want to help our team be as productive as possible this year and if everything works out well, we’ll be having this conversation again next year.”

Vinatieri is only 58 points shy of passing the Hall of Famer Andersen (2,544) for the top spot on the NFL’s career scoring list. Vinatieri has scored at least 58 points in every season of his career, except 2009, when he played in only six games. He also only needs to make seven field goals to break Andersen’s record of 565.

“I know I’m 58 points away,” Vinatieri said. “It’s definitely within reach this year if I stay healthy. I really wanted to break that record wearing a Colts helmet where I’ve played the majority of my career. It’s unbelievable to be able to play another season here.”

Colts general manager Chris Ballard called Vinatieri “one of the best players in NFL history” in the statement announcing his re-signing. Owner Jim Irsay also tweeted his excitement at getting Vinatieri re-signed.

Thrilled to have pre-Hall-of-Famer Adam “The G.O.A.T.” Vinatieri signed!

Vinatieri will be the kicker for a 2018 Colts squad that will be led by new coach Frank Reich, who was still playing quarterback in the NFL when Vinatieri made his debut in 1996. Vinatieri said the hiring of Reich this month and Ballard in January 2017 played a part in wanting to re-sign with the Colts, who have missed the playoffs three straight years.

Vinatieri spent his first 10 seasons with the New England Patriots and the past 12 with the Colts. He won three Super Bowl rings with New England and one with Indianapolis.

“The last couple of years of not making the playoffs and stuff was a real frustration,” Vinatieri said. “I wanted to play on a team that I felt we could get back to the playoffs. Everybody’s first and foremost goal should be playing on a championship team, winning a Super Bowl. I felt like with the decisions of bringing Chris Ballard and the changes he’s made last year and moving forward this year, to me felt like we were moving in the right direction.

“I look at this as a team that can make the playoffs moving forward. That was a big decision for me. I clearly wanted to stay in Indy.”

“Assuming we’re not playing in a crazy Buffalo blizzard and stuff like that, maybe we’ll hit the incentive this year,” he said. 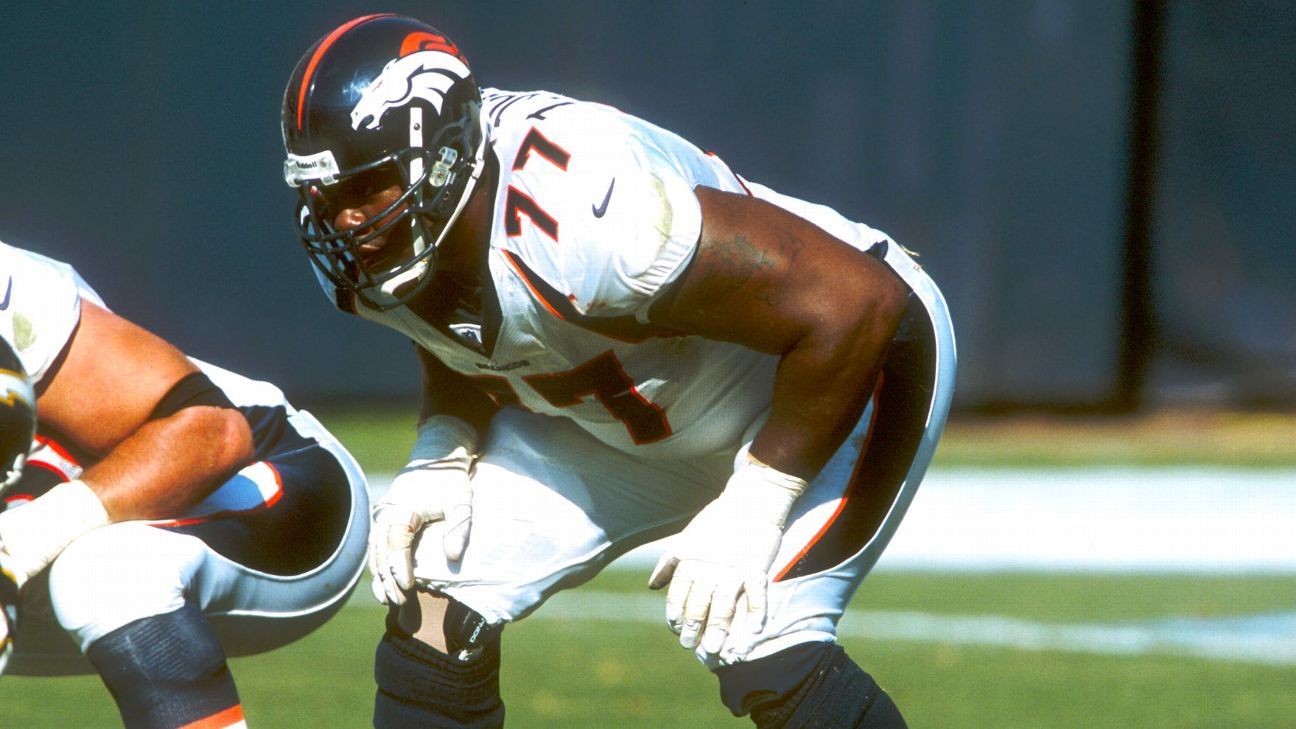 ENGLEWOOD, Colo. — Tony Jones, a starting tackle on two of the Denver Broncos‘ championship teams, has died, the team announced Friday. He was 54.

Jones, who started at right tackle in the Broncos’ win in Super Bowl XXXII and started at left tackle when the team won Super Bowl XXXIII the following year, played 13 seasons in the NFL with the Cleveland Browns, Baltimore Ravens and Broncos after he entered the league as an undrafted rookie in 1988.

Known as “T-Bone” to his Broncos teammates, he spent the last four years of his career with the Broncos, retiring after he started 16 games in the 2000 season at age 34.

“We lost a great man,” former teammate Rod Smith posted on Twitter. “Just happened to be a hell of a ball playa. We love you and miss you Bone. One of the Broncos’ all time best tackles. Greatest dresser of ALL TIME!”

Ed McCaffrey, another former teammate on the Broncos, called Jones “a great teammate and a wonderful man,” and Hall of Famer Steve Atwater, who also played on those two Super Bowl teams, said Jones was “a great teammate” with “just the most beautiful kids.”

Atwater also said Friday night that many of the players on those Broncos teams have continued to stay in contact with one another and that “everybody is hurting in this.”

The Broncos, believing they were poised to rebound from a playoff loss to the Jacksonville Jaguars to end the 1996 season, traded a second-round pick to the Ravens in 1997 to acquire Jones.

In Super Bowl XXXII, at right tackle, he held Hall of Famer Reggie White without a sack and to one tackle overall as the Broncos rushed for 179 yards and Hall of Famer Terrell Davis was named the game’s MVP.

After Gary Zimmerman, also a Hall of Famer, retired before the 1998 season, Jones moved to left tackle and started every game on the way to a Pro Bowl selection as the Broncos went on to win a second consecutive title. 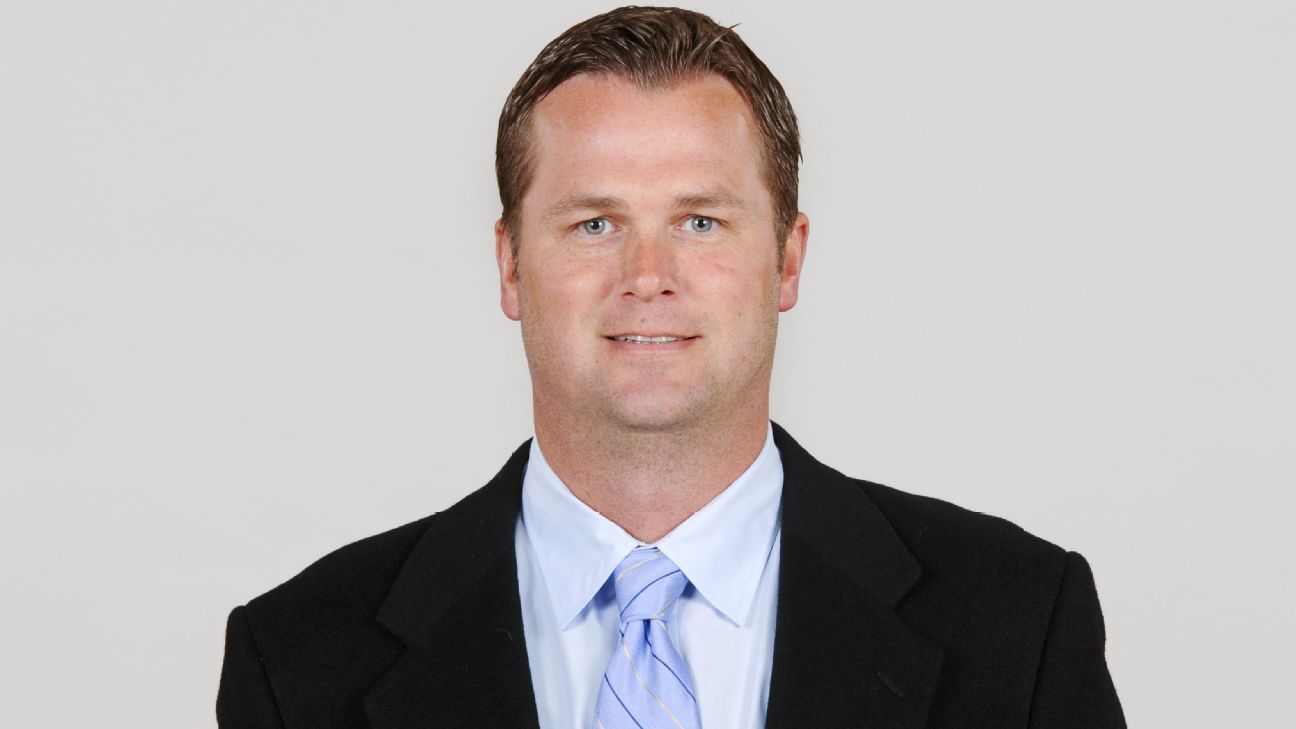 CHARLOTTE, N.C. — Scott Fitterer looked the part of general manager, dressed in the dark blue suit he bought 12 days ago in Charlotte because the clothes he brought from Seattle for his interview with the Carolina Panthers were tight after nearly a year in a pandemic.

He sounded like a GM, not discussing specific players or plans until he gets to meet, and learn more about, everybody in the organization.

• At last, Rodgers vs. Brady in the playoffs
• Ex-Bills eager to see Buffalo ‘finally’ win title
• Burning questions facing Browns’ offseason
• Who stays and who goes for the Bears?
• Takeaways from Campbell’s introduction

What kind of general manager Seattle’s former vice president of football operations will be for Carolina remains to be seen.

Here’s what we learned from Friday’s made-for-Zoom introductory news conference:

Noncommittal on quarterback Teddy Bridgewater: Fitterer began by saying he wouldn’t talk about specific players. He mentioned only two, linebacker/safety Jeremy Chinn and running back Christian McCaffrey. He mentioned Chinn because they have a mutual friend/agent. McCaffrey came up at the end when Fitterer said he wanted to talk to “Christian and other leaders on the team.’’ Bridgewater never got a mention despite several questions referring to him. Make of that what you want.

However, when asked for his definition of a franchise quarterback, second on Fitterer’s short list of criteria was “someone who can win when the game is on the line in the fourth quarter.’’ Bridgewater was 0-8 this past season when he had a chance on his final possession to win or tie the game.

Deshaun Watson interest: The Panthers have been linked in multiple reports to interest in trading for the disgruntled Houston Texans quarterback if he becomes available. Fitterer didn’t mention Watson by name. When reminded that Seattle lived by the mantra that it wanted to be in on every big deal in the NFL, even if it didn’t realistically have a shot, Fitterer said, “We will be in on every deal.’’ This was a big part of Seattle’s culture, because it helped the organization learn about others. It also allowed officials to reduce second-guessing.

Roster philosophy: Fitterer made it clear it starts with the quarterback. A former college quarterback himself, Fitterer helped Seattle find a pretty good one in Russell Wilson. Again, read into his silence on Bridgewater as you please. After quarterback, Fitterer plans to build inside out with offensive and defensive linemen.

Draft philosophy: Fitterer called having the No. 8 pick in this year’s draft a “new adventure,’’ and with good reason. The last time he had a pick higher than 27th was 2012, when the Seahawks picked 15th. He has made a living hitting on second- to middle-round picks. Wilson was a third-rounder in 2012. Fitterer found in Seattle that the top-tier players usually stopped between 16 and 18, and that in general there wasn’t a huge difference in players between 25 and 40. Seattle often traded down to acquire more picks. One instance was last year, when it gave Carolina the 64th pick (second round) for picks No. 69 and 148. The Panthers used that on Chinn, who became a strong candidate for NFL Defensive Rookie of the Year. Fitterer said the eighth pick was great because it gave him flexibility to trade up or down. So don’t get comfortable at No. 8.

Who’s in charge? You’ve read here for a while that coach Matt Rhule will have the final say over the roster. Rhule reinforced that by saying, “In terms of on the contract, a lot of those things probably rest with me.’’ He also said that that’s a formality and that he welcomes a GM who will argue with him. He ultimately wants this to be a collaborative effort the way it was in Seattle. 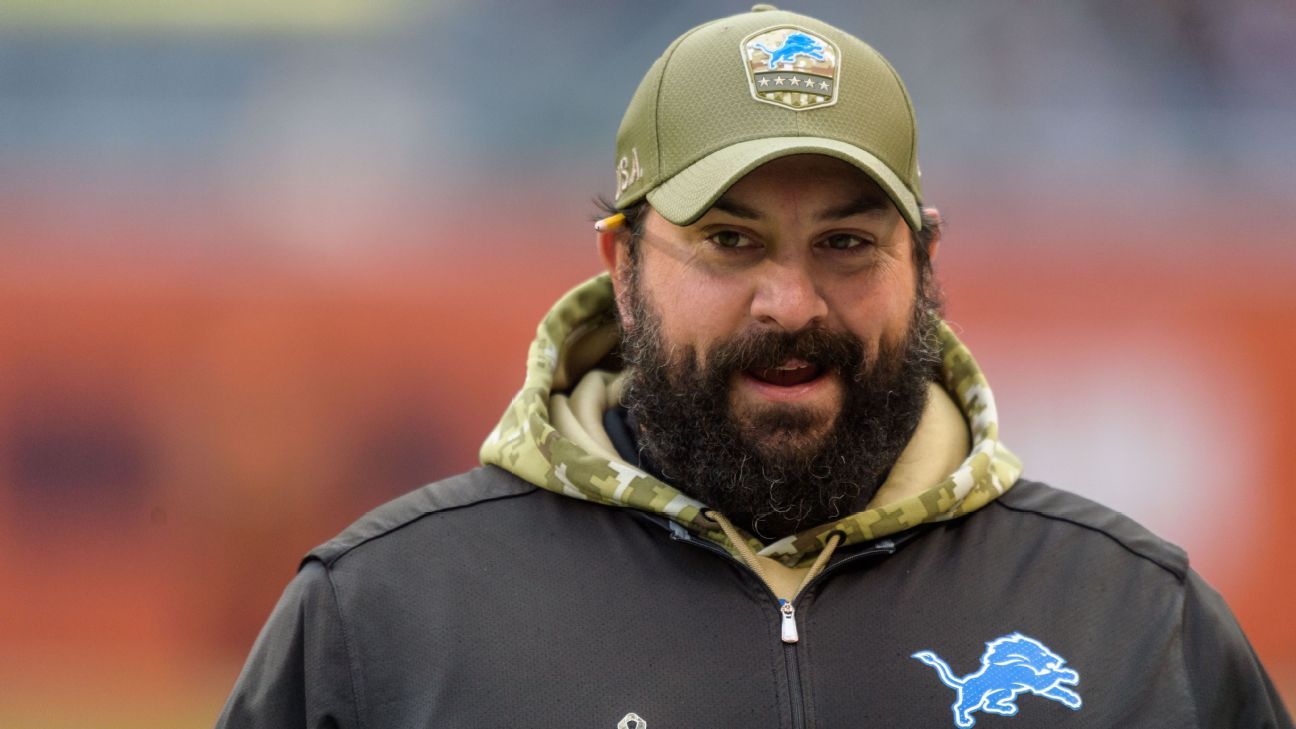 FOXBOROUGH, Mass. — Matt Patricia, who was fired as Detroit Lions head coach in November before the completion of his third year on the job, is returning to the New England Patriots‘ coaching staff in 2021, a source confirmed.

Patricia had been an assistant on Bill Belichick’s staff from 2004 to 2017 before landing the Lions job. In Detroit, he posted a 13-29-1 record, with one of those victories coming over Belichick’s Patriots early in his first season.

It was a turbulent tenure in Detroit for Patricia, and a return to New England — where he is expected to assist Belichick’s staff in a variety of roles — provides him a safe and familiar haven in which to continue his coaching career in the NFL.

Patricia, 46, had most recently served as the Patriots’ defensive coordinator from 2012 to 2017, and in his absence, Belichick hasn’t given that title to another coach. But Belichick referenced this past season that his son Steve, the outside linebackers coach, was calling the defense.

Also, inside linebackers coach Jerod Mayo has a significant role. Mayo, 34, is considered a coach on the rise, as evidenced by his recent interview with the Philadelphia Eagles for their head-coaching opening that went to Indianapolis Colts offensive coordinator Nick Sirianni.

Patricia’s return mirrors, in part, what came in 2014, when Belichick hired Michael Lombardi — his former director of player personnel with the Cleveland Browns (1991-95) — as an assistant to the head coach.

The familiarity that Lombardi had with Belichick, and the team’s overall system, made his transition into the organization rather seamless.