A-LEAGUE expansion is back on the agenda after FFA last week set a firm date for two teams to enter the competition in 2019-20.

With an FIFA delegation visiting Australia to sort out FFA’s congress standoff, the game’s governing body put out a press release on Friday stating the two successful A-League licences will be decided this year.

But according to Fox Sports football personality Adam Peacock, two new clubs should not be the end point for the A-League, instead calling on FFA to release a complete road map towards a 16-team competition that includes promotion, relegation.

Speaking on the Fox Football Podcast, Peacock also called on the various powerbrokers in Australian football to be transparent with their views of progressing the top competition.

“A 16 team A-League, here’s a little spiel … This is the end game I have in mind: 16 teams in the A-League, with a home and away 30-game season and promotion, relegation.

“Then, and only then, can we say we’re heading in the right direction, or at least some kind of direction that has the chance to unite this game in this country.

“Because at the moment, football is the most populated participation sport, but it’s basically a nation with multiple autonomous regions, and always has been.

“So what does this week change?

“I’m not sure, the FFA and the clubs are locked in a battle … the FFA have a new operating model that they’re ready to bring out – the first step being, as we heard last week, the two new clubs in 2019-20.

SIMON HILL: Oz football is sleepwalking into a big problem

“How’s this decided? Well we’ll find out soon, apparently. But let’s see the whole plan, the whole operating plan. The clubs are rolling their eyes at this news – for two new clubs – and probably fair enough.

“They want an independent A-League, nothing less will do, and on the face of it, that may be fair enough. But how does that actually work?

“They have a plan, which they say they’ll release in due course, but we haven’t seen it. We look forward to seeing it. If it doesn’t include, though, the framework for a bigger A-League and promotion, relegation one day – I’m not saying in five years – but one day, well it feels like we’re going around in circles.

“Then the state federations all have their own plans. But if they’re not on board with the concept of a strong A-League and a united front to bring these NPL clubs up to speed so they’re ready for promotion into a national top division, what’s the point?

“The state federations, basically those multiple autonomous regions I speak of, make up the biggest portion of Congress. Let’s see their plan for what the ideal model of Australian professional football is.

“I repeat, end game: 16 teams in the A-League, home and away 30-game season, promotion and relegation. And that’s my plan at least. 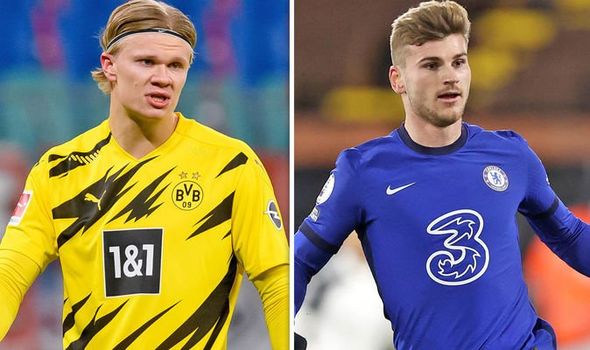 Chelsea would love to sign Erling Haaland from Borussia Dortmund when the transfer window reopens at the end of the season.

There are just 12 days remaining of the January transfer window and we’re still waiting for deals to happen – although most clubs are looking to sure up their end-of-season plans rather than bring in any big deals this month.

But that doesn’t stop the gossip and whispers and we’re rounding up all the latest transfer news in today’s Rumour Mill.

Mohamed Salah has said that he wants to stay at Liverpool for as long as he can, weeks after seemingly opening the door to join Real Madrid or Barcelona at the end of the season.

The 28-year-old has just over two years remaining on his current deal, meaning that if Liverpool were to sell him, they wouldn’t get a higher offer than they’d be able to command at the end of the current season.

Salah has refused to rule out a move to LaLiga recently but has now put the ball firmly in Liverpool’s court and insisted it is all in their hands.

Speaking to Norwegian channel TV2, Salah said: “I do not know. If you ask, I say I want to stay here as long as I can, but as I have said before, it is in the hands of the club.

Ozil to leave Arsenal for Fenerbahce

CHELSEA TO BREAK BANK FOR HAALAND

Chelsea are preparing a club-record bid in an attempt to gazump the rest of Europe’s top clubs to the signing of Borussia Dortmund star Erling Haaland.

Haaland, who is one of the most-wanted stars in the world, has a release clause in his Dortmund contract, but it doesn’t come into effect until 2022, when every major club in Europe will be chasing his signature.

And The Athletic is reporting that in an attempt to avoid the inevitable scramble, Chelsea will punt for him a year early in what will eclipse the £71.6m paid for Kepa Arrizabalaga in 2018.

He will be available for £66.6m at the end of the 2021-22 campaign and if Dortmund are to lose the 20-year-old a year early, they will want a substantially larger sum of money.

It comes as £54m signing Timo Werner struggles to find form at Stamford Bridge, although Haaland is seen as a player who will complement the German, rather than replace him.

How did Aubameyang miss this?!

Arsenal have finally got Mesut Ozil’s £350,000-a-week wages off their wage bill and are now looking to find a replacement in that attacking midfield role.

Emile Smith Rowe has impressed since coming into the team five games ago, with the 20-year-old’s form coinciding with Arsenal going on an unbeaten run.

However, according to Sky Sports, Mikel Arteta has his eyes set on Norwich playmaker Emi Buendia – although it will cost them a “crazy” offer of around £50m.

“One player they (Arsenal) have been watching very closely is Emi Buendia at Norwich City,” Sky Sports transfer insider Kaveh Solhekol said. “I have been in touch with some people close to the player today.

“The problem Arsenal would have with trying to sign him this month is how much it would cost. Norwich are a very well-run club with a sustainable business model.

“I have been told it would take a crazy offer for them to be tempted to sell him this month. A crazy offer we are looking at somewhere between £40m and £50m.”

Arteta’s job was hanging by a thread less than three weeks ago after going seven Premier League games without a win to see them languishing precariously above the relegation zone.

In any other season, where a pandemic hadn’t put such a tight belt on the finances, Arsenal may have been considering dipping into their accounts to pay-off Arteta’s contract and throw more cash at his replacement.

But they didn’t, they followed their manager’s example in sticking with their guns and continuing to believe in the project being undertaken at the Emirates – and now they’re reaping the rewards.

The 3-0 win over Newcastle was Arsenal’s fifth consecutive clean sheet in all competitions – the first time that has happened for the club for 12 years. To put that into perspective, Manchester City are one game away for achieving that feat for the second time this season.

Credit for that has to go to Arteta, who has turned a partnership of Rob Holding and David Luiz into a brick wall, seen Hector Bellerin get back to near his best and helped Kieran Tierney become one of Arsenal’s main attacking playmakers.

When Tierney was absent for the dour 0-0 draw with Crystal Palace on the weekend, it was evident as the Gunners lost all of their spark down the left flank. But that was all back on Tuesday morning, in more ways than just the Scot.

Aubameyang’s timely return to form will be another relief for Arteta, with his form dipping dramatically just after signing a new contract at the start of the season.

Watching him in the months after that three-year, £55m deal was signing would have given the Arsenal board post-traumatic stress disorder from doing something similar with Mesut Ozil, only to see him leave the club for free this month after being omitted from the first-team squad this season.

They’ve been dearly missing his goals and there’s been a gaping hole of creativity, with Ozil not replaced – until now.

20-year-old Emile Smith Rowe has graduated from loan spells at RB Leipzig and Huddersfield Town to Europa League appearances to holding down a first-team spot in that attacking midfield role. And he is thriving.

He brilliantly set up Arsenal’s other flying youngster Bukayo Saka for Arsenal’s second on the night and may just be the cost-effective replacement for the £350,000-a-week Ozil that is required in these financially-tough COVID period.

The Gunners are undefeated since Arteta elevated him to starting duty in the Premier League and in that time he has created 10 chances for his teammates over five games – the second highest in the league for that period.

How did Aubameyang miss this?!

The only person who has created more is Manchester United’s player of the year candidate Bruno Fernandes, who created 12, and Smith Rowe is hoping he can emulate those sort of number for the rest of the season.

“I look up to Bruno Fernandes as a player. His stats are crazy,” Smith Rowe told Sky Sports after the game. “We enjoyed that so much, we’re coming together as a team so we’re really happy with the win and the three points.

“Everyone’s getting fit and we’re all getting together on the training pitch. Just the whole group is so much stronger and I think it’s showing on the pitch.

“I’ve been a bit unfortunate with injuries but the manager has given me a chance and I’m so grateful, I just hope to repay him. Every opportunity I’m getting I just want to show him that I’m good enough to be in this team.”

Arsenal are far, far from where Arteta wants them to be and still a million miles off contending for the Premier League title again – it would be a big surprise if this squad could even muster a Champions League place – but there are signs that the grand plan is working.

And with Smith Rowe and Saka being the driving force in front of a sturdy defence, the building blocks are all there for Arteta and Arsenal – even if there are sure to be more setbacks ahead in the near future.