PEORIA, Ariz. — Now that San Diego’s first base position is in Eric Hosmer‘s $144 million hands, it seems as if there are 144 million candidates for the one remaining starting spot in the Padres’ outfield.

Wil Myers will move to one of the corner spots after playing first base the previous two seasons, manager Andy Green said, and Manuel Margot remains a fixture in center field after a notable rookie season in 2017.

That leaves the other seven holdovers who made at least 20 starts in the Padres’ outfield last year — including power bat and 2013 first-round draft pick Hunter Renfoe — in the mix for final starting position and the reserve roles.

“He’s right in the thick of that competition,” manager Andy Green said of Renfroe, adding, “we didn’t have to have a (roster) move to cause that to happen.”

Green mentioned Alex Dickerson, Franchy Cordero, Travis Jankowski, Matt Szczur and Joel Pirela as others in the outfield competition, noting that Pirela also could spend time in the infield.

Renfroe slashed .231/.284/.457 with 26 homers last season but was optioned to Triple-A El Paso in mid-August to work on his ability to get on base. He drew 17 walks in his first 54 games but had only four walks in 130 plate appearances between June 29 and his demotion.

Renfroe, who made all of his 117 outfield starts in right, again showed power when he returned. He had six homers, including a three-homer game against Arizona on Sept. 20, but walked only once in 44 plate appearances.

“There were definitely some positive signs, things we were encouraged by,” Green said of what he saw when Renfroe came back.

“Just like every young player, there is stuff to learn and continue to grow,” he said.

“They are going to serve him very well,” Green said. “Skip Schumaker, the one thing I will tell you about him, he will be all over everybody to do it the way that is right. He was raised in that environment, coming up with Tony La Russa teams.”

Myers, who played center field with the Padres in 2015, has begun taking flyballs in the outfield and has said he is all-in about moving back. He is under contract through 2022 after signing a six-year, $83 million deal last year.

“We see him as a guy who can play the corners ably at both positions,” Green said.

“I’d say probably the majority of reps between those positions would be leaning toward right. We’ll give him exposure to both and kind of watch and see. Listen to him, too. How he is seeing the ball in both places. Naturally he is probably a little bit more comfortable in right, but we are going to have to see about the roster composition, too,” he said.

Margot, a prized piece of the deal that sent Craig Kimbrel to Boston in November 2015, slashed .267/.323/.426 with 13 homers and 13 stolen bases primarily from the leadoff spot last year.

“My expectation is that he competes to win a Gold Glove in center field … and anchors the outfield and continues to go about his work with a 100-runs-scored mentality,” Green said.

Dickerson missed all of last season, undergoing back surgery in June after rehab was ineffective. He had 10 homers in 84 games as a rookie in 2016.

Cordero was the most valuable player and rookie of the year in the Dominican winter league after hitting .323 with 25 RBI in 50 games with Escogido.

Jankowski missed much of last season with a fractured foot after stealing 30 bases in 131 games in 2016.

Szczur played on the Cubs’ 2016 World Series team. Pierla hit .288 with 25 doubles in 83 games after a midseason promotion last year. 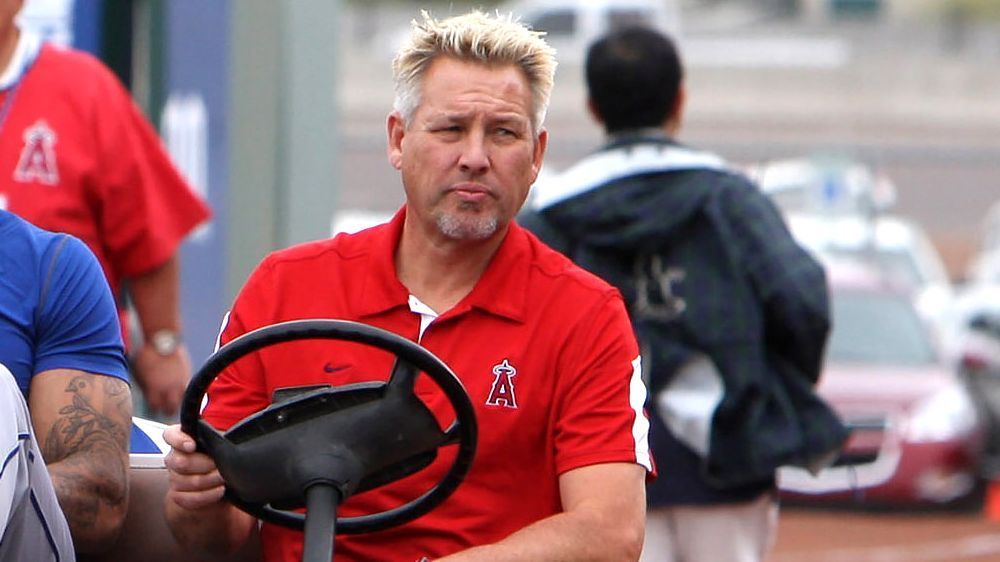 A defamation lawsuit filed against Major League Baseball and the Los Angeles Angels by Brian Harkins, the longtime clubhouse attendant who was fired for supplying illegal ball-doctoring substances to pitchers, has been struck down in Orange County Superior Court.

Judge Geoffrey T. Glass granted the defendants’ motion to dismiss Harkins’ complaint, stating there was not enough evidence to prove Harkins had been defamed in the wake of his firing.

A hearing was held on Jan. 21 to determine whether the case would move forward, and the judge’s ruling was released Monday. Dan Rasmussen, an attorney for Harkins, said he plans to appeal.

Harkins was fired last March, ending a nearly four-decade run with the Angels, after the organization was informed by MLB that he was providing pitchers with an illegal blend of rosin and pine tar.

Harkins’ original complaint, alleging defamation and false light, outlined the reasons applying rosin and pine tar on baseballs has been a long-held, accepted practice done largely for safety reasons and stated that the publicity surrounding his firing unfairly cast him in a negative light that impacted his ability to find employment.

MLB and the Angels filed a motion to dismiss Harkins’ complaint in early November. In an opposition to that motion, Harkins’ lawyers aimed to capture the widespread use of Harkins’ concoction and show that others had not been punished for similar, if not more serious, transgressions. It included a January 2019 text message from Gerrit Cole in which he clearly asked Harkins for his blend, as well as notes from a phone conversation in which Justin Verlander allegedly told Harkins that MLB began to crack down on pitchers’ use of ball-doctoring substances when it learned teams were conducting studies to concoct more advanced blends in order to maximize pitchers’ spin rates.

In its decision, the court weighed three central issues — whether Harkins was truly fired because of his concoction of rosin and pine tar, whether he provided it to pitchers and whether doing so was illegal. The fact Harkins didn’t dispute the first two issues and that the third is supported by Rule 6.02(c) hurt the plaintiff’s side.

Another factor was that comments from MLB and the Angels toward Harkins were made in private, and that subsequent reports about the reason for his firing were attributed to unnamed sources.

“This is not to say that the termination was justified under the circumstances,” the judge’s ruling read, “only that the plaintiff cannot show that these statements were false and defamatory.”

We’ll be ready to host spring training, delay or no delay

After sending a letter to Major League Baseball commissioner Rob Manfred that suggested delaying spring training “to allow for the COVID-19 situation to improve here,” Cactus League executive director Bridget Binsbacher told ESPN on Monday that the 10 Phoenix-area facilities that host teams will be ready to open if games start as scheduled.

Binsbacher’s letter, which was co-signed by six mayors, two city managers and a president of a tribal community, cited the Phoenix area’s high COVID-19 infection rate and a model that “projects a sharp decline in infections in Arizona by mid-March.” Fifteen teams are scheduled to arrive in Arizona around mid-February, with games slated to begin Feb. 27. The Cactus League has no authority to change the schedule.

The letter comes as MLB and the MLB Players Association attempt to juggle a series of issues, including the viability of starting games on time, in a continuation of their strained relationship that manifested itself last season with Manfred’s implementation of a 60-game schedule. The union is insistent on playing a full 162-game season this year and continues to chafe at the notion of anything less.

The league, in a statement, said: “As we have previously said publicly, we will continue to consult with public health authorities, medical experts and the players association whether any schedule modifications to the announced start of spring training and the championship season should be made in light of the current COVID-19 environment to ensure the safety of the players, coaches, umpires, MLB employees and other gameday personnel in a sport that plays every day.”

Binsbacher said the Cactus League had worked with spring-training facilities, other local sports and MLB since September — and that MLB did not specifically request the letter. The concern from officials expressed in it goes against the actions taken by sports franchises and others in the Phoenix area. The Arizona Coyotes and San Jose Sharks are playing regular-season NHL games in Glendale, the Phoenix Suns are having regular-season NBA games downtown, and high schools across the area are participating in all sports.

One issue with baseball, Binsbacher said, is the influx of tourists — six in 10 who attend spring-training games are from out of state, she said — and the packed schedule teams play. “The big difference here,” she said, “is we’ve got 32 to 36 days straight of spring training.”

Further, Binsbacher said, the likelihood of the COVID spike in Arizona abating is greater with every day delayed. Arizona leads the United States in COVID case rate and death rate, a position it has held for most of January. The state is averaging nearly twice as many cases per 100,000 people than the average in the United States.

“We know that there’s a vaccine and that it’s going to have been administered,” Binsbacher said. “The projections say that the cases will plummet by mid-March. That makes it absolutely more manageable to do this with every additional day.”

A December executive order by Arizona Gov. Doug Ducey limited the number of people at a public event to 50 “unless the city, town or county in unincorporated areas has determined that adequate safety precautions which are consistent with the guidance issued by both the CDC and ADHS for mitigating the spread of COVID-19 are documented as part of the request.” If the mayors or other leaders insist spring training will not come to Phoenix, it could scuttle the Cactus League — though sources doubt they have the political will to do so, particularly as other sports are held in the area.

Any spring training delay could theoretically have an effect on the regular season — something the MLBPA is treating as a nonstarter and MLB understands would cause regular-season games to move into October and postseason games to November. Already the discussions between the union and league about potential playoff expansion and the implementation of the universal designated hitter have gone nowhere. The MLBPA, sources said, rejected and didn’t counter an MLB proposal to expand the playoffs this year to 14 teams, fearful that a diluted playoff system would disincentivize teams from spending in free agency.

With the current collective-bargaining agreement set to expire in December, the relationship between the sides has remained frosty. Whether the letter is simply much ado about nothing or the first salvo in the latest fight between the two remains to be seen.